Mike Rimmer met up (again) with Ontario-based singer/songwriter JOEL AUGE to talk about ministry, music and plumbing as worship 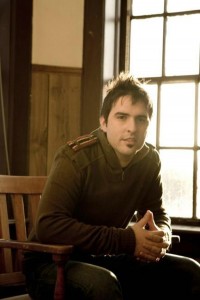 Current listeners to Cross Rhythms radio will have come across Joel Auge (pronounced Ojhay) as his "Miracle Love" is getting mucho airplay. The first time I came across Joel Auge was further back. He was fronting a rather cool Canadian worship band called Capstone. At the time of the emergence of the modern worship scene, Capstone were recording some good stuff and I interviewed them for an article Cross Rhythms published in 1998. Then I lost touch with Auge while he went on to have spells in the bands Six Days and Hewit. Then in 2008 Integrity Music were getting excited their newly signed "worship artist". And there was Auge, now an Ontario-based musician connected with The Meeting House family of churches, sporting a punchy solo album 'On The Blue'. I met up with him in Nashville.

Auge confesses that he is the ninth born of 11 siblings of a Catholic family. He explains, "My parents are devout Catholic; still to this day. I went to church every Sunday. I was raised with the virtues of the Catholic Church and it was a huge part of our lives as kids. We were all packed up every Sunday, sometimes Wednesday mornings, to go to church. We all went to Catholic school."

The family didn't have a television so making music was something that happened regularly around the house. He remembers, "Myself and all of my brothers and sisters going to do dishes and that was kind of the time where we'd do French folk songs or we'd all sing together at the dishes - yeah, because there were A LOT of dishes!" He laughs, "All of my brothers and sisters are very musical, all of them are talented. Some of them are singer/songwriters themselves so it's just something that has always flowed."

It was a natural thing for Auge to decide to spend his life making music. He was 18 years old when he became a Christian in Newfoundland but why did he make worship music and not simply become a Christian pop singer? He responds with a simple answer, "Because the stuff that was impacting me was worship music. For instance, my parents, the Christmas before I got saved, they sent me a Kevin Prosch CD. I came to Christ while listening to 'Kiss The Son', so I knew that I wanted to participate in a corporate environment; something that was the body of believers coming together and honouring the one who saved us. So that really is why I did the worship thing rather then just becoming a Christian pop singer." 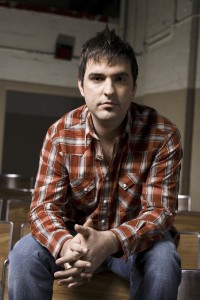 Capstone started in 1999 and lasted for about four years and the Prosch influence was always there very strongly. "Well the guys in the band were from jazz backgrounds," Auge remembers, "so there's this propensity to move outside of the normalcy of pop music so I really have an appreciation for that. On my solo album you won't find as much as it is an internalised experience. I really do explore the themes of love on the album but Capstone was always a little bit on the outside of what was happening in Christian pop music."

The sounds and adventurous approach of Capstone was a long way away from today's formulised pop rock approach where seemingly everybody is trying to write a worldwide worship hit and get on the CCLI Chart and make big money. Hasn't Joel sold out by signing to Integrity Music? "Well, it depends on how you look at the record really. The cool thing about this record is that I was allowed to do the whole thing on my own before Integrity ever came along. So they saw the value in it and I have to thank them for seeing it as a creative piece and then buying into it and saying, 'Okay, we like this enough that we actually believe in this guy who's making songs and we're gonna back him up with funding,' which is ultimately what labels do, right?"

I suggest to Joel that I would have been scared that Don Moen would show up in the studio with his violin and that it would be all sanitised. I tease that maybe that's the next record. "Yeah, maybe!" he laughs. "You know what? I'm gonna take that into consideration and next time just create songs where you can kind of hear the prophetic dancers in the back, the flag wavers, the shakers. . .I'll leave Don his space for the violin and we'll go from there."

He continues, "Well I think that the struggle is there for me with them. I have this tendency of walking the line, of being both artist and this worship leader in the context that they're used to so it probably was a struggle for them to sign me. And I'm not shy about the fact that my stuff doesn't fit the normal worship context so I think that THEY'RE making strides to look for something that God is doing. I have to give them that much. As for me, I'm just going to be me and the value in what God has taught me, if it's real, if it's authentic, if it has impacted me, then hopefully it will impact other people. I mean, who cares about what other people are writing or doing?! I know that what God is doing in my life is impacting me and that's what I'll write about. So hopefully I'll keep getting to do that." 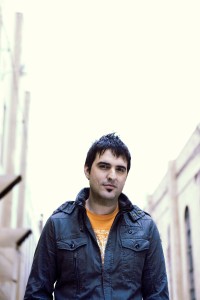 So how does he sum up what he does? Is he a worship artist? Is he a singer/songwriter? "That's a very valid question! My job in the church - I don't have a staff position. I am one of the creative people so I basically voice my creativity and I share it with the congregation. I do lead worship. It's a very large church. There's six satellite locations and so I'm kind of the one that goes around to the different sites and leads when others can't, which gives me a unique perspective on the size and the body of our community. But to be honest, I think the idea of the worship artist has very little to do with the worship movement or anything, it has to do with the word 'worship'. I think we, as a Western Christian culture, have placed on this term some kind of holiness thing which says the offering isn't worship, the speaking and teaching isn't worship, it's just this musical package that's worship. I think that's blasphemy to be honest. I think that is not doing justice to the people who can't sing, can't play, can't do anything in that way. They have as much to give as anyone who can sing or write a song. A plumber, if he does his job well and offers it to God, is worshipping in his craft."

He continues, "Why do we waste time saying it's a 'worship record'? Why do we waste time saying, 'worship resources'? I mean, our whole life is meant as a sacrifice. If we compartmentalise worship then we're assigning that to whoever else listens to worship music. It's sad really. As a Christian artist, as a Christian worshipper, as someone who worships God in hopefully the most real way possible, my worship will work its way through my relationship with my wife, with the people that I work with on a daily basis, and hopefully through the record; that'll be another way."

And for those who pick up a copy of 'On The Blue', what is he hoping will happen when someone puts the CD into a car stereo? He looks thoughtful for a second and then responds, "I want them to put the CD in the CD player and as they listen to it, that their authentic questions, their authentic experience, is shared with me. Those are real things that I've gone through and as I give my praise and worship to God through song, that they would join me. If they join me we'll have an incredible experience together and that is my only desire with the album. I don't expect it to go any further than that. If they come to see a live concert or see me lead worship, I hope the very same thing; that they would join me, because we have a God who is worthy of the adoration and praise of our lives. That's all I want."

so many artists today just sing anyhow without training school,this continue to happen over and over why and what can we do to revive this issue?

This is so inspiring. God is amazing at how he knits people together - supernaturally, in ways we aren't even aware. I have decided to embark on a public worship arts adventure...by blogging. If you'd like, check out http://theworshiparts.com.