John Nicholas: Welsh master of the powerful song and the loop pedal

Slowly but surely the name John Nicholas is registering with Joe Public. His have-guitar-will-travel policy has taken his thought provoking songs to the highways and byways of Britain, a handful of singles have got radio play ("Run Away" is currently on the Cross Rhythms playlist) and his debut EP 'What My Eyes Fail To See' was released yesterday. Clearly John has a lot to talk about and I began by asking him whether he'd consciously set out to write songs that both believers and non-believers can relate to.

He responded, "Yeah, totally. I just really enjoy writing and I enjoy writing about truth and stuff that's relevant to people and I think that's where we need to meet people where they are with the song writing. Christian or non-Christian, everybody can experience being on their own or feeling a little bit down, everyone experiences those things. Hopefully my music can begin to draw people in to find security and real love and family and strength and hope that is in the Lord."

The hard-gigging songsmith plays a wide variety of venues and events. "When I tour I just play music venues rather than playing at purely Christian events. I do work with churches and Christian festivals and youth festivals. It's so nice to be able to serve in that way. But what I love to do is go and play music which is steeped in biblical truths to the unchurched. I absolutely love playing these festivals, getting in and putting the hard work in and going right to the bottom of the bill in the secular side of things and being a bit of a light there."

John was born in Bridgend, South Wales. He has two brothers and he grew up very much in a Christian environment. "My dad was a preacher, he'd go around preaching. It was all fun and games seeing dad at the front. I always wanted to play guitar from a fairly young age, but I learned piano first. When I was about 13 I had a guitar and I picked it up and I started teaching myself off the back of the piano knowledge. So that's where my music came from, just practicing and playing and enjoying it and going from there. When I was 16 I started playing in various little bands and when I got to uni I played in a band there. It wasn't particularly serious one but it was great fun. We didn't even form a name but we played a few things and wrote some stuff. I was in a Christian band called Written In Kings for a few years. I was with them for about four or five years and they are still going, of course."

His years with Cardiff's Written In Kings produced some singles, "Out Of The Fire", "She Was Singing" and "We Are One". But then marriage and the start of a family meant it was time for John to leave the band. Becoming a solo artist was a high risk venture for John but his emergence proved to be perfectly timed. "At the time I didn't really know what I was going to do so I just thought I'd give it a go and it just sort of came. I wanted to do stuff on my own and God just opened a door at the right time and things are sort of going on from there."

Anyone who has seen John Nicholas in concert will know that he has become a master of the loop pedal. He explained, "My wife bought it for me for Christmas. I'd seen it somewhere and I thought that'd be good fun. I was playing a lot of pub gigs and weddings and cover shows and all that kind of stuff and I was getting really bored of the songs that I was playing. So I thought if I buy one of these I can make it different every night. You can change it up. When you're singing other people's songs and you're doing it all in the same way they did it gets really boring very quickly. But if you change it up you can have a bit more fun with it. So that was my reasoning behind buying it. It's slowly crept into my main set and I love using it now. I try not to overuse it but it's one of those things that if you use it in the right way it can be really effective. Using it makes a gig a bit more of a spectacle. It's a little bit more interesting for them to see live, it's really fun. I like working and playing under pressure so you give me any sort of pressure scenario and I feel like I've got to win that situation and do it the best I can."

But doesn't using a loop pedal a risky business? I ask. "Oh, I've had some howlers! You've just got to press undo very quickly and it goes back one [step]. You've got to keep your cool on that one. What I like about it as well, even if your guitar slips out of tune, you've just got to quickly record something, press play, put my tuner on, tune it up behind closed doors. It's a nice get out of jail free card sometimes. I've been playing consistently with it for about two years. But when I bought it I sort of locked myself in my room for about two weeks just trying to get my head around it. I wanted to be able to gig with it straight away so I thought if I can do it with my eyes closed then that's the best way. If I can do it as confidently as that then you don't have to think about it and you can perform even better."

Didn't John's use of a loop pedal result in people accusing him of copying a certain Mr Shearn? "I was expecting everybody to say this, that and the other. I'm quite surprised that I haven't had any of that yet at all. I think I use it in a slightly different way than Ed does. For me it's more just to build it up and get the harmonies." 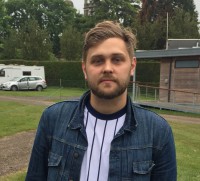 Since launching John has put out four singles - all of them on the five-song 'What My Eyes Fail To See' EP. He spoke about a couple of them. "Run Away" is a bit of a love song, it was written for me and my wife and things like that. It's a very happy, fun song. I sat and had a chat with my managers and it was a case of 'how can we release this? How can we do this properly?' We ended up doing a tour where I ran every leg of the tour to raise money for charity. I ended up running about 120 miles in six days, which hurt the legs a little bit but it was good. My Mum's got Parkinson's disease so we raised money for that."

Another of his singles was "No Man Is An Island". Said John, "It's a song about realising that we're not on our own, that even when we feel like we're on our own, even when we feel messed up and kicked into the ground and you feel that you can't get up and carry on, there's hope in something, someone who is greater than you, who can see the big picture and who can guide you along the path you need to go."

The newest recording on the EP is "Rely". Explained John, "It's about our dependence. I wrote it around the time my son was born. New born babies are utterly dependent on their parents and maybe sometimes that's how we need to be. There's real freedom in dependence and relying on somebody who's greater than you. The EP is called 'What My Eyes Fail To See' which is from the lyrics in the song 'What Love Is'. The line goes, 'Teach me something that I ought to know/Teach me something that will warm my soul/Show me what my eyes fail to see.' So it's about seeing something that you can't quite grasp yet."