JOHN PANTRY is one of the most experienced figures in British Christian music. Clem Jackson and Tony Cummings report. 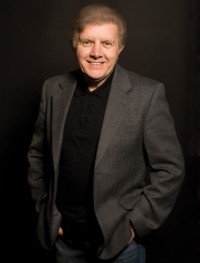 The June release by Kingsway Music of the 'God Of The Empty Space' album by John Pantry once again brings into the spotlight one of the most varied and prolific careers in the whole of British Christian media. John is today a Church Of England minister and popular broadcaster with London's Premier Radio. However, for decades before he entered the Anglican ministry Pantry has been a seminal figure in music. To do full justice to John's vast reservoir of activities and achievements would require a book rather than an article but for those wanting to at least grasp the bare bones of John's history one could chart his pursuits under several different seasons. First there was the:-

Mainstream Music Season 1965-1972: John became an omnipresent on the music flowing from Southend-on-Sea. As a singer he performed and recorded with his band Sounds Around, who became Peter & The Wolves, as a BBC-trained recording engineer he worked on the first three UK albums by the Bee Gees and as a songwriter and/or producer he worked with a myriad of obscure acts like Norman Conquest and The Bunch for Eddie Tre-Vett Productions, the resulting singles being leased to labels like CBS and MGM. Amazingly, interest in John's studio work from connoisseurs of '60s pop has grown down the years and a wealth of Pantry songs/productions and demos were compiled on a 1999 vinyl album 'The Upside Down World Of John Pantry' and expanded into a CD version in 2009.

Christian Artist and Producer Season 1972-1982: In 1972 John Pantry was asked to produce the "Light Up The Fire" single by British folk gospel group Parchment. Released on Pye Records it was a minor chart hit and Pantry was soon being asked by the tiny Key Records (the label which was to become Kingsway Music) to produce a number of their Christian music acts. After working with acts like Graham Kendrick, Adrian Snell and Gwen Murray and being "prayed for like crazy" John committed his life to Christ. Numerous Christian production sessions, usually tiny budget but occasionally big budget (Parchment's 1973 album 'Hollywood Sunset'), followed. In 1974 John spent a year in California working for Maranatha! Music. Back in the UK, many more productions followed and in 1978 Kingsway Music released John's first solo album 'Empty Handed'. It was a success and over the next few years four more Pantry albums followed, including one with the vocal group Fresh Air.

Ears & Eyes Season 1983-1989: John formed a record company Ears & Eyes Records with entrepreneur Kevin Hoy whose management company Music Creations had arranged the tour which sourced John's 'Hot Coals' 1981 album. Starting with a Phil Potter album, Ears & Eyes quickly broke into its stride with a series of albums by such fledgling British acts as Martyn Joseph, Nia, Shirley Novak, Triumph and Zero Option as well as releasing fringe items like albums for the Wildlife Fund and Emmerdale Praise Party (!). Ears & Eyes also released Pantry's own albums 'It's For You' (1983), 'Discovery' (1984), 'Simple Sailing For Beginners' (1986) and 'Breaking New Ground' (1987). But after an exposÃ© in Private Eye magazine detailed Hoy forging Gloria Gaynor's signature to secure a BBC contract and Hoy leaving Australia with thousands of dollars of unpaid bills Ears & Eyes crashed in ignominy. The rights to the Ears & Eyes masters were eventually secured by Word.

Radio Presenter and Curate Season 1989-2009: Picking up his artist ministry after Ears & Eyes, John released the 'Raindance' album through Kingsway Music in 1989. But music was suddenly something of a background activity when John received a call from God to go into the Anglican ministry. He began training at Oakhill College and was ordained in 1993. Two years later John became a regular presenter on London's Premier Christian Radio. Today he is one of the presenters on Inspirational Breakfast, the station's breakfast show where his easy going manner and "everybody's favourite uncle" persona have gained him a large listenership. At weekends John works as a non-stipendiary Curate and has three children (including a son at whose marriage he ministered) and six grandchildren. John's music activity seemed to be behind him so it was a surprise when he announced that he was writing a new musical setting for a communion service. That setting is the 'God Of The Empty Space' album. The album includes 17 new pieces and was produced by Christopher Norton. It features the Adoramus choir from London with lead vocals from Pantry and Ingrid DuMosch. John was quizzed by Clem Jackson at the Premier studios about his unexpected return to music.

Clem: Why such a long gap between albums?

John: When I first joined Premier Radio, God gave me a real passion for Christian broadcasting and for the past few years I guess I've just been so engrossed in that and haven't really thought about writing music. But my minister, Sam Norton, said to me, "You know we could really do with the Benedictus being set to music." So I set about writing something and we are still singing it now every week in church. I thought I should do a couple of other pieces and started writing a version of the Gloria ("Glory To God") and the Sanctus ("Holy, Holy, Holy, Lord") which are also on the album. 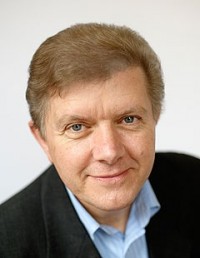 Clem: So is it a strongly liturgically focused album?

John: It is indeed, yes. About half a dozen of the 17 pieces on the album are directly part of the Anglican Communion. As well as the Gloria, Sanctus and the Benedictus ("Blessed Be The Lord") there's the Acclamation ("Christ Is Risen"), the Angus Dei ("Lamb Of God") and the Prayer of Preparation ("Almighty God"), all very much part of the normal Anglican communion service that a lot of people either say or sometimes sing. But there are also a number of solo songs on the album, such as the title track and some choir pieces as well.

Clem: So is everything from the Anglican Communion setting on this album?

John: Well, that's a very good question because I kept going back and thinking, "Oh in this version of it they sing this and this other one they sing that" and so on, so probably not but I've got most of the key parts.

Clem: What is different about the setting you have written?

John: I think, I hope, it bridges the gap between the very traditional versions of the Anglican Communion setting and some of the more modern praise and worship music by people like Stuart Townend, Graham Kendrick and Matt Redman. It's not that contemporary but it's not that traditional either. I hope I've hit a middle course - which is why the Royal School of Church Music were so interested. They said (and it's a God-incidence isn't it) they had been looking for something that bridged that gap between the traditional and the modern, which is why they are publishing the music book for churches.

Clem: How easy do you think these pieces are going to be for congregations to pick up?

John: I don't think they will be too difficult, but I guess the "proof of the pudding will be in the eating". We'll know a few months after the album and the book come out whether people are picking it up and using the music. In the book there will be the four-part choral arrangements and there will also be backing tracks available as well. Hopefully this be an incentive and encourage churches to use the material. We will also be making backing tracks available on my new website www.johnpantry.com which will hopefully help too.

The opinions expressed in this article are not necessarily those held by Cross Rhythms. Any expressed views were accurate at the time of publishing but may or may not reflect the views of the individuals concerned at a later date.
About Clem Jackson

I love seeing where the tiny seed ends up - knowing John when he was a 'nut' and now seeing an 'oak'.

In this case, 'bridging the gap' with the'new Nunc Dimitis etc, seems like it can fan out into a brand new way of worship for the rather staid and sometimes 'cold' format of the Anglican church. I remember the weekly format as a child, and although there was something special about it, I was (for most of the time) left wondering what I was saying/doing, being totally ignorant of God really, at the time.

But now, I am looking forward to the new way of worship for the new millenium of Anglican (and other) worshippers. Will buy the CD next time I'm in the UK, as a gift to spice up the Anglican worship over here.

Great article about someone who I saw live not long after the Lord got hold of me in 1979. His song "Empty handed is how He wanted me" has been in my mind on numerous occasions, because the truth endures, doesn't it? Good pianist, I remember.
Probably would struggle with all the Anglican format of his new creation, but good luck ...and as long as the Lord is honoured, great.

Just listened to the Nunc Dimitis with Adoramis Choir on Premier Radio- Excellent. I look forward to purchasing the book with all the communion service music to send to my childhood Church Choir in Sri Lanka.