Jonathan Butler: From being talk of the townships to international pop soul star

James Attlee caught up with singer/guitarist JONATHAN BUTLER who is risen from shanty town obscurity to pop stardom. 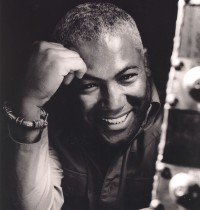 Musicians love to speak of their humble beginnings. So much so that if they don't exist they'll invent them. It's good copy after all, and fuel for the romantic dream-pop-as-escape-route from poverty or nine-to-five banality.

Jonathan Butler is no rebel without a cause. He, if anyone, would have some justification for having a chip on his shoulder big enough to bury the whole unjust apartheid system in. No such chip is evident - merely gratitude for his present good fortune, and a burning desire to see wrongs righted in a country that, though distant, is still very close to his heart.

He was raised in a rambling shanty-town outside Cape Town called Athlone - he was later to immortalise the name of the street he grew up on using it as the title of an early album, 7th Avenue.

So what was it like as a kid living on 7th Avenue?

"Well, I guess those years on 7th Avenue were exciting...there was shanty houses for miles and miles and we had to walk maybe five blocks to buy drinking water from another family, so we used to take turns to buy this water and carry it five blocks home. Then there were gangsters, drug dealers, alcoholics...there was a lot of horses, a lot of stables, you know - God, you name it they were there on 7th Avenue. But some of the best music was from there too. My family - I'm the baby of 17 kids - we were like the largest musical family in Cape Town. It was exciting, but at the same time it was really sad - it was oppressive."

"Ok we were a very talented family, but there was no money in the house. My mother; worked and supported 17 kids - we never had any proper clothes, I mean we used to go to school with no shoes on in the winter, we had shorts with holes in you know...if I wanted to tie my shorts up I had to use wire and string to tie them and kids don't like going to school looking like -that, so I hated school, I hated going out of the house."

Faced by these problems, the five-year-old Butler, like so many before and since, based his hopes for deliverance on his emerging musical talent.

"I knew I could sing by the time I was five. My family were already in the music business, my brothers were touring, and I got involved with the family. I wanted to sing so I could have a better living, so I could support my mother as well. I also began to realise that I had dreams, I began to realise the possibility of one day being an international recording artist and I began to desire to be famous. There was a lot of violence in my house, a lot of drinking and drugs and as a child I just wanted to make a better life for all of us. Its a big dream for a child of five or six to take on when there's 16 older brothers and sisters, but I felt that this was a gift from God, a heavenly dream - I mean, how could anyone have a dream like that at six years old?"

From the age of six Butler went on the road in the 60-strong cast of a musical called The Golden City Dixies. This meant spending a year at a time away from home and experiencing unprotected the full impact of apartheid as a young child.

"The road was long and hard - I know South Africa backwards. We would play six months for the whites, then maybe a few weeks for the blacks in the townships, or we'd set up a tent somewhere in a field where the people would come out to us. I experienced racism; quite open racism, as a six-year-old. When I was able to start reading I started to see 'whites only' signs in restaurants and places. I was wrapped in a blanket and thrown in the back of a car and sneaked into hotel rooms, having to wait for the waiter to leave before I could come out of the bathroom. We had to pull into separate caravan parks - if it was a caravan park for whites I had to stay in the caravan, it was like a nightmare. I used to sell programmes before the gig started, so as people used to drive into the auditorium I used to run to their cars and sell programmes, so I was this little 'kaffir-boy' selling programmes but on stage I was performing and they'd give me a standing ovation - but when I wanted to go to the toilet I couldn't because I wasn't allowed to."

You were quite a star in your early teens, weren't you?

"After I left the play aged 12 I was discovered by a record label called Bullett - Ladysmith Black Mambazo and all those guys were on the same label as me. I had my first record out and it went to number two in the pop charts, then I became the first black to cross over into the pop charts in South Africa and I had three or four years of top five hits, and got the equivalent of a Grammy Award.

That was a unique experience because on the night of the awards this model had just turned Miss World. I walked up on the stage and she was there to present the award, and she shook my hand and leaned over to kiss me. They actually switched off all the TV cameras that moment, so for the people at home the TVs went blank, it was weird! Anyhow I received the award and I had maybe three or four years of success. It was quite amazing, bigger than Bros in a way, I couldn't go anywhere, I had to run for my life all the time - I thought this is not what I want, I want to be a jazz musician."