Andy Butcher spoke to the keyboard player of Journey, JONATHAN CAIN, now branching out as a solo artist 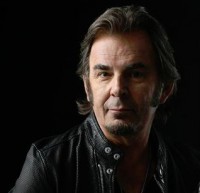 The news that Jonathan Cain, while on a break from touring with rock superstars Journey, had recorded a solo album has raised huge interest among rock buffs while believers have been intrigued with its title, 'What God Wants To Hear'. As it turns out, the album might be considered the long-awaited fulfilment of a prophecy hinted at in "Don't Stop Believin'", the anthemic Journey number he helped pen and which in 2009 became the top selling track in iTunes' history among songs not released in the 21st century.

Cain's solo album, releasing 21st October on US-based Identity Records, is the first in which he celebrates and explores the faith he knew as a young boy and which dogged him at a distance even during his lost years as a rock and roll star. As such, "there is a heavy responsibility that comes with it when you are dealing with the Lord," he says. "I just can't be off the cuff or cute or clever. No, it has to be based on what the Word says, so there is a little bit more of a structure to it, and definitely a bit more discipline lyrically."

'What God Wants To Hear' features 13 songs Cain wrote in the course of about a year, following his April 2015 marriage to well-known television preacher Paula White. They met on a Southwest Airlines flight when Cain was traveling with Journey - an encounter he says was a key element in his rediscovery of God's love.

Raised in a Roman Catholic home in Chicago, Cain was "very spiritual" as a boy: "I had a deep love for Jesus Christ; I wanted to be a priest when I was young." That faith was rocked, though, as a third grader at Our Lady Of The Angels School when 92 fellow students and three nuns died in a terrible fire.

He never shook his spiritual roots entirely, however. Later when Cain wondered whether he should give up on his dream of making it in the music business, his father - "a deeply spiritual man; he taught me how to pray, he gave me my first breakthrough with Jesus Christ, he gave me the word of the Lord" - told him on the phone to hang on. "Don't stop believing," he urged his son.

When Cain subsequently was invited to join Journey, that admonition came back to him as the band wrote for its 1981 album, 'Escape'. Bandmates helped flesh out the melody and chorus Cain brought, and the result would in due course become part of rock and roll history: "Don't Stop Believin'". He also helped craft other Journey classics "Who's Crying Now", "Faithfully" and "Open Arms".

'What God Wants to Hear' began after Cain was asked to lead praise and worship for a women's conference White was leading last year. "I learned eight songs and I came back and I said, 'You know what, some of these songs are pretty light: it doesn't seem like they are really talking to God, they sound like they are talking to some girl, but there's no God in the song, there is no Bible in the song,' and I am like, 'Is this some kind of new thing?'"

Frustrated, he sat down to write his own music, the first song becoming the title track of the new album. "It was my prayer to the Lord, that I might be worthy to minister his word to other people," Cain recalls. "I was asking permission in that song to go forward, and when I finished there came this big outflow."

Cain discovered the Bible in a new way during this time. "Things jump out at me that probably the average guy that has had his face in the Bible all these years is already bored with, but I am not bored with it; it is fascinating," he says. "I won't write something unless it is scripturally correct; I always check in with my Bible expert, my wife. She has been around all this praise stuff for a lot of years and she would give me her okay and I would go forward."

Instead of beginning with a melody, as he usually would, the new songs "all came from the word that God would download," he says. "He would get me on an idea and I would go deep into the Bible and then I would find things that were new to me."

Cain wants to "minister the word to people in a different way. I am not really trying to write praise and worship per se; I want them to take the word and run with it and maybe I can get them into scripture, and back into the Bible, and they can find things I have written that will minister to their lives and will help them. That is really it: I want to bring people back to the word, I want to make the music a companion to get them back to God."

The actual recording of the album took just a week, during a break in Journey's latest tour earlier this year. The work was done at Cain's own Addiction Sound studio in Nashville, so named because it used to be a drug rehab center and Cain believes that "music is the only thing worth getting addicted to, it is rehab for the creative spirit."

With two failed marriages behind him, the father of three knew that he had some spiritual work to do before he married White. "As an eight-year-old boy you don't really know about the enemy," he reflects on the years he drifted in his faith. "Nobody teaches you, and so although I always had that relationship with Christ," when a spiritual mentor told him after he met White that "there has to be some work done. . . I received it." The result has been "just sort of a rekindling of a relationship [with God] I knew was available for me. The relationship I'd had with the Lord I knew could be restored."

Cain recognizes spiritual themes running through much of his past work, both as a solo artist and a member of Journey. One of his own older songs is titled "When The Spirit Comes". And he recalls collaborating on the title track to Journey's 1996 'Trial By Fire' with then-singer Steve Perry, the lyrics inspired by a passage from a Bible the vocalist brought into the studio with him. "There I am with a Bible on my console," Cain remembers. "It was profound and wonderful, and we wrote this beautiful song. It was just an anointed moment for me."

I just want you to know Jonathan Cain that song Deeper than deep, I personally felt the anointing of God when you sang this song. I had the goosebumps go all over me which was the holy spirit this song ministered to me deeply. Thank you for your obedience unto the Lord. I'm so blessed and so moved by this song!