Josh Wilson: The "future of Christian pop" on Christmas and the art of looping

It is rather ironic that singer/songwriter Josh Wilson, who has been hailed by Christian Retailing magazine as "the future of Christian pop" and had his 2008 album 'Trying To Fit The Ocean In A Cup' named one of the Top 10 albums of 2008 by Gospel Music Channel, should be best known for a viral hit on You Tube singing a Beatles song. On 3rd January 2010 during security delays at Newark Liberty International Airport, Wilson decided to pull out his guitar and entertain his fellow passengers. He played "Hey Jude" and the crowd sang along.

Josh is a veritable multi-instrumentalist playing, amongst other things, guitar, piano, dulcimer, ukulele and mandolin. On his latest album, the Christmas project 'Josh Wilson Presents: Noel', he plays an astonishing 18 different instruments. Renowned for utilising looping during his onstage performances, he was asked recently by Christianity Today whether looping was used on 'Noel'. He responded, "I wanted to find some kind of hybrid between the stage and the studio and I knew I would get better sounds if I used just purely studio gear and not my live pedal. And I wanted to be able to come back if I messed up a take to do it again. Whereas live, if there's any kind of little flub on a note or something, that's going to play for the whole song, but that's kind of the nature of a live concert. So we mostly did a track at a time for a lot of these songs. We had a drummer and a bass player, but I played everything else."

Speaking about his selection of Christmas songs for his album, Josh said, "I guess I was a little bit self-indulgent in the traditionals that I chose; I just chose a lot of my favourites. But I wanted to create unique versions and unique arrangements of these songs, so that if someone pops the CD in and they hear 'The First Noel', a song they've heard a thousand times, I hope this arrangement is fresh. Same with 'O Come, O Come Emmanuel'. I think the melodies are haunting, but I tried to arrange it where, again, it's fresh. When people hear a fresh arrangement of a song, I think they listen to the words again. How many times have we sung 'Silent Night', but we kind of forget the meaning of the words because it's just so traditional, so routine? We're really singing about a big event here. We're singing about when God came to earth. And so my hope is that these arrangements of the traditionals will be fresh."

Joshua "Josh" David Wilson, the son of a preacher, was born in El Dorado, Arkansas on 14th November 1983 and grew up in Lubbock, Texas. He recounted, "I don't remember a time when I didn't believe in Jesus, but my faith was never really challenged until I went to college. During my freshman year, I encountered people who were nice and smart, but who didn't believe what I believed, and they started to challenge my faith. I didn't have the foundation I needed to come up against those questions. A lot of things that I thought I knew started to fall apart. The Lord picked me up and said, 'There are good answers to these questions, but you're going to have to do some searching and praying and ask some smart questions yourself to figure out why you believe what you believe.'" 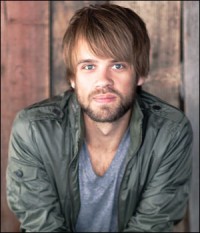 In 2004 Josh recorded his first album, the independent 'Dragonfly', and two years later released an EP, 'Shake The Shadow'. By 2007 he had come to the attention of EMI CMG's Sparrow Records and was signed to the label. His 2008 release 'Trying To Fit The Ocean In A Cup' produced a major Christian radio hit with "Savior Please". Touring the US with Big Daddy Weave and Matthew West Wilson's live performances, which fused deadpan humour, a powerful spiritual message and dazzling musicianship, were soon being raved about by the critics. In fact, more than one journo suggested that Wilson's guitar virtuosity was "Keaggy-esque" though when this comparison was made to the Texas-based songsmith by NewReleaseTuesday website he ruefully shrugged it off. "Please don't hang that on me. Playing guitar is a passion for me, and I do enjoy playing. But you never arrive. You never become the best, and that's not what I'm trying to do anyway. I want to take some lessons and brush up on my playing because honestly, I'm a little rusty."

Songwriting for Josh doesn't come easy. He said, "I have a passion for songwriting, but I don't think I would say that while I am in the middle of writing a song. Songwriting is hard work, and I'll procrastinate and avoid it at all costs. It is absolutely the ground fighting back against man's efforts to till the soil. Melodies come to me a lot easier than words, but lyrics are where the weight of the song is. The melody may stick in someone's head, but eventually they are going to start thinking about the words. That's why I feel so much pressure. Ultimately, it doesn't matter if you write a good song with a great hook if the words are meaningless. It is a daunting task and a big responsibility. I do not take it lightly."

In 2008 Josh released his first Christmas project, 'Sing: A Christmas EP', and the following year another EP, 'Life Is Not A Snapshot', the latter producing another major Christian radio hit with "Before The Morning" which gained the number four spot on Billboard's Year End Christian Songs. Some of the tracks on 'Life Is Not A Snapshot', including "Before The Morning", were included on Sparrow's 2010 release 'Josh Wilson'. Cross Rhythms' reviewer wrote, "If you're familiar with the work of Steve Curtis Chapman and enjoy the sounds of people like Jason Mraz and Jack Johnson, then you'll appreciate this album. Without doubt the production on this album is top notch with Josh Wilson's voice centre stage."

In 2011 Josh's 'See You' album was released. Wrote NewReleaseTuesday, "With a probing spiritual curiosity and imaginative, self-examining lyrics, 'See You' solidifies Josh Wilson's place among the finest song crafters of his day." One of the standout songs on the project was the powerful "I Refuse". Josh told journalist Kevin Davis, "'I Refuse' evolved as I was reading David Platt's perspective-shattering book, Radical: Taking Back Your Faith From The American Dream. Simultaneously, the 1,000-year flood hit Nashville, devastating entire communities on 1st May 2010. I was out of town when the flood happened. I was amazed by the amount of devastation and loss that happened. My first inclination was to ask God to rally the city and surrounding community for the time and resources to recover. I realised that I was praying for the flood victims, but I wasn't doing anything myself. I was almost using my prayer as an excuse to not do anything else. As Christians, we're called to be the hands and feet of Jesus and serve the "least of these." So that phrase came back to me. . . I refuse to do nothing."