Emily Graves spoke to Sylvia Dalziel about her book THE JOYSTRINGS: The Story Of The Salvation Army Pop Group 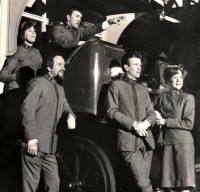 The Joystrings (originally credited The Joy Strings) are a significant part of Christian music history. In 1964 an appearance on Cliff Michelmore's BBC Tonight TV show landed them a recording contract with EMI and the release of the single "It's An Open Secret" made 32 in the UK pop charts. Another chart hit followed later that year with "A Starry Night". Main members of The Joystrings were Joy Webb (who wrote the group's first hit), Peter and Sylvia Dalziel, Bill Davidson and Wycliffe Noble. In September 2013, 50 years after The Joystrings' formation, original member Sylvia Dalziel wrote the handsomely illustrated book The Joystrings: The Story Of The Salvation Army Pop Group. Emily Graves interviewed Sylvia about The Joystrings' amazing story.

Emily: The Joystrings weren't founded as part of a big plan.

Sylvia: No, it wasn't. Actually, I'd just gone into the training college in London to study to become a Salvation Army officer. This was in August 1963; then in November a new general was elected by the Salvation Army. In his press conference he was asked by the media what new thing he would do during his term of office to communicate the Gospel with other people. Being a very wise man, he said, "You tell me: what should we be doing in the Christian church to communicate?" The Beatles had just come on the scene and so it was suggested, "What you need in the Church is a pop group."

Emily: What was the reaction to this?

Sylvia: He said, "Of course, if it means changing our tack and going into clubs or coffee bars with guitars, I guess we could do it." He left it at that, but the next day the press came and said, "We want to take photographs of this group" - which didn't exist, of course. They came to the training college, where they hoped they would find students with guitars; and they found some girls from Scandinavia, and they had guitars, so they took some photographs. They didn't sing, they were just photographed outside 10 Downing Street. But the next day a television company from Canada came and said, "We want to hear this group." So the leader of the girls' choir, the students' choir, was asked to go to the principal's office, and she was asked if she could teach the girls to sing some up-tempo stuff. Then they discovered two guys who'd just come into college had guitars under their beds, which they couldn't play - but she taught them some chords. That's how it started: just put some students together and sing some up-tempo Christian music, which was then available - nothing written specifically. 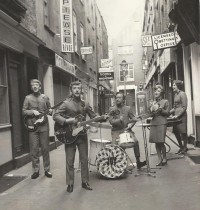 Emily: Where does the name Joystrings come from?

Sylvia: After that, Cliff Michelmore of the Tonight programme - the equivalent now is the One Show - he got them on television and it snowballed. Someone from EMI, who had been recording the brass bands of the Salvation Army, was watching; they saw this group perform on television and they said, "What are we going to do about this little lot? We've got a recording contract with the Salvation Army." So they called Joy in and said, "We need to do something: it's obviously going to go places, this group." They discussed a name, and they came up with Joystrings - this was EMI that came up with the name - because of the joy that's expressed in the New Testament. And strings opposed to bands - musical instruments which are in bands.

Emily: This was very different for the Church. Was there a reaction from Christians to the music?

Sylvia: Eventually there was. That was because, more or less, of the places we were going into, that's where the real reaction and the attack came upon the Joystrings. We went into places like the Playboy Club, into nightclubs in Soho - places where you think Christians shouldn't be. The attack came from the Church, thinking we shouldn't be going into places like that; but not upon the music itself, because I think young people in the '60s were waiting for something new which would communicate with them and with people who needed the Gospel. It meant we had to begin to write lyrics which really communicated the Gospel message from the old Victorian language which was constantly sung in hymns. It was one of the producers in EMI who said, "When the Joystrings walked through the doors of Abbey Road studios, they changed the face of religious music forever," which then gave licence to the Christian Church to begin writing and singing much more up-tempo, communicative songs.

Sylvia: It was such a phenomenon that a Christian group miraculously had managed to get straight into the charts with something. The leader of the group, Joy, who was the girls' choir leader, wrote that during one of our intern sessions when we were having a spiritual day. It came to her in a flash as she heard a Scripture read.

Emily: Was Joy the main one writing the lyrics, or did everyone have their opportunity?

Sylvia: Yes, eventually. None of us, not even Joy, had ever written a song in her life. We feel this was God-intended, Holy Spirit-engendered, because it came from somewhere, and you have to say, "Where did these songs come from?" It was divine inspiration for her. Eventually, when those of us who were finally selected to be in the group were into the swing of what we were supposed to be doing - we were still studying at the same time, but having to do these gigs - each one of us began writing in various styles of the '60s so that we could put a full programme together.

Emily: When you joined the Joystrings, they were already well known.

Following the success of The Joystrings, many corps worldwide spurned similar groups. One such Salvo Corps at Nundah Queensland Australia, already had a good female vocal quartet operating for some years by them and Bandmaster Eric Moore who played accordion teamed up with his sons, Barry on Tea chest bass and Raymond on drums.

One of the singers (Verna King- now Gittins) had a brother Mervyn who played the cornet well and the boys and girls combined to be one group, The Harmony 4 plus 4.

This group quickly rose to enormous popularity along the eastern seaboard of Australia and were in demand for concerts etc Tours to Sydney x2 and Melbourne occurred as well as TV and radio appearances.

The Salvation Army Historic Society in Eastern Australia have the original T chest bass, which had become the icon of the group image.
Visitors to the Societyâs display recalled the group and its popularity in its heyday.
So the Society decided to ârevisitâ the group and put a special night on to learn more and reminisce.

Fortunately the four ladies are still around although theyâre all 80 or more ( one is 95 now).

Eric has sadly passed but some of the others are still around. The special night is occurring on Monday 28/10/2019 at Carindale Salvation Army ( a suburb of Brisbane. The women will sing and Barry will Demo the one-string bass and together with newspaper cuttings, photos and recordings made 50 or so years ago, those in attendance will be able to sing along and reminisce.

After hearing the Joystrings, I and other members of the Salvation Army in Nuneaton, England, formed a similar group called the Gospelaires. We used to play some of the Joystring songs, as well as our own material. Is it possible to but a book of the Joystrings song with music and chords?

I was a child of under 10 living in Jamaica when my big sister came home from England (where she was at boarding school) with a record of the Joy Strings. I had never heard anything like it but loved it and played it over and over on our gramaphone. We did not even have a television. I can still sing "It's and open secret now" and have just had my 60th birthday!