Jules Rendell: The accomplished diva who can really Get Gospel

Tony Cummings met up with the gospel singer who doesn't have to out-it-out and snarl, JULES RENDELL 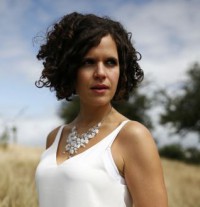 Go to YouTube and you see Jules Rendell soulfully singing with the choir she formed, Get Gospel, when they appeared on the BBC Gospel Choir Of The Year competition in 2015. Look on the lady's website and you'll see a review, originally published in Echoes magazine (which is bi-lined The UK's Essential Black Music Monthly), and read how her 'The Lotus Bloom' EP "puts her somewhere near Minnie Riperton in style: not for her the belt-it-out and snarl approach, more the exquisitely measured, deftly placed emotional squeeze of someone who is interested in delivering you the message in the song." What is particularly intriguing about all this is that Jules once trained to be an opera singer.

I caught up with this most accomplished of vocalists at a festival in Bedfordshire and she told me her story. "I was born in Bromsgrove which is in Worcestershire. I lived there for 18 years and then I went to Manchester to the Royal Northern College of Music. I studied opera up there, which was nice. I had a classical background; I played cello so I was in orchestras and things like that so I wanted to do opera. When I was there, in Manchester, I actually became a Christian."

Jules grew up in the Catholic Church but had no clue about the Gospel message. She explained, "I went to Uni and, the first day, I met two Christians and then about six months later there was an evangelistic kind of week at the college and that's when I heard the Gospel for the first time. So it was relatively easy for me because I suppose I had a little bit of a background but didn't know any of the details. I've always loved soul music. I grew up listening to Luther Vandross and Anita Baker. My Dad had this amazing record collection, which he still does, with all these Motown artists. I loved it. Strangely, although I had a classical background and played cello in orchestras and things like that and was studying opera, I never really listened to classical music. So at the end of my time at college I thought 'd'you know what, I don't really want to do this opera thing. I want to go and do soul music and gospel and jazz'. I did all the jazz courses when I was there and I sang with a big band and all that so I kind of made the most of everything extra-curricular from opera. After that point I kind of made the transition."

One of those extra-curricular activities was the Manchester Sing Out Choir. Said Jules, "It was formed because the Gorillaz did the Manchester International Festival at the Opera House so it was drafted together for that and then continued on from there. I made an EP called 'Jules Rendell' in 2007 and at that time I was moving to London from Manchester. It was made with Manchester musicians and was very soulful and a little bit electronic. Then in 2009 I made one on my own - piano and just vocals and that was called 'Sunrise'. I was doing gigs in bars, open mics, festivals. With the song 'Sunrise' I won a competition on Premier Radio for unsigned artists to play at Big Church Day Out and that was 2010 and it was the biggest thing I'd done up till that point."

Jules spoke about her songwriting. "Most of my songs, even now, will come from a place of my life and in my life I have a relationship with God so some of them are talking about the Lord and to a Christian it would sound explicit because they'd understand it. If you weren't a Christian you'd just think it was a great song. I'm a worship leader as well and I've written a lot of worship songs and I've done worship albums but I want to write music that anyone can listen to and understand." 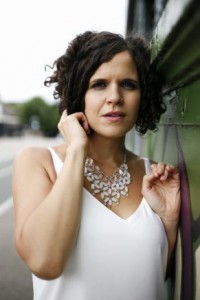 In 2012 Jules' third EP 'Collection' was released. "We did it in 48 hours. I like to work with short deadlines and I had a gig coming up so I thought right! I'm going to release an EP for it. To be fair, two songs had been produced already and then we did two songs in 48 hours. It was great. I added a fifth one to it which was on the earlier 'Sunrise' EP and we did a full band version because it was on a film called The Father's Love, a feature film in the US, a Christian film, and they asked me to do a full band version of the song called 'Thank You'."

Everyone seems to agree that her 2014 EP 'The Lotus Bloom', like its predecessor produced by Goziam Okogwu, is Jules' best so far. Wrote Cross Rhythms, "Rendell's main asset is her voice and, whilst there are plenty of singers out there - Joss Stone comes to mind - who have adopted the same Americanised-delivery and sound just like her, she carries it off with aplomb in the likes of the optimistic 'One Day' and the bass-driven soul of the cautionary 'Destination'. Elsewhere, 'Carry On' continues in the general upbeat feel of an EP that seeks to gently communicate God's love for us whilst the simply stunning title track showcases Rendell's vocal, piano and songwriting skills in one fell swoop."

Jules spoke about the song "One Day". "There's a guy, I call him an environmentalist, I don't know whether that's the right word, a guy called Danny. I met him on a cruise ship. He was going to research some geographical areas, the effects on the environment that population have for instance around Asia. He was writing blogs everyday so he asked me to write a song to go on one of these blogs. I had no clue what to write about the environment so I thought, well, I know how to write a love song and so I thought I could write a love song to the environment because the thing is, we live in this world and it's an unrequited love relationship really in that the world gives us everything that it's got - its beauty, its natural resources - and we ruin it! Sometimes we think we'll have to do something good for the environment, we're gonna recycle or we're gonna offset our carbon footprint but then you kind of fall away from doing that and it's half hearted. And I thought this is just like a relationship where it's unbalanced; one person loves the other more than the other one. And that person says I do love you, honest, but then they don't show it. And that's just the way we are with the world sometimes, I think. So I picked a verse in Romans 8 where it says creation groans for the sons of God to be revealed."

An even more moving song on 'The Lotus Bloom' is the title track. "My friend and flatmate Susanne got chronic fatigue. She had shingles and it developed into this chronic fatigue. From what I've seen this chronic fatigue is very much linked to emotions and past experiences. You have to go through a lot of counselling. It kind of develops in your body. And she went through an amazing transformation as a person because she worked on her relationship with God and she realised who God was and that he really loved her. She'd had bad experiences growing up with family members so she had a skewed view of who God was. . . She would call herself a Christian and go to church, pray for people. But she realised she didn't like God. So God had to reveal himself to her in a special way and he really did. It was a slow process but through it all she was miraculously healed and she's married now, got two children, and she'd doing great. I sang 'The Lotus Bloom' at her wedding."

It's the gospel and soul group/small choir Get Gospel that takes up much of Jules's time. She explained, "I spend most of my week doing that, arranging songs and gigging. We do all sorts of different things. You do the normal kind of weddings and funerals, all that kind of thing, but we also do commercials and sessions and really fun things. It's very varied and I get to work with some absolutely fantastic singers. So I make a living out of music which is amazing. As well as doing my own thing and doing the odd session here and there."

Jules has just got married to a chap called Arley and when she gets back from their honeymoon in Israel she will be embarking on a Kickstarter-funded EP. It would be something of a first for the session-seasoned singer in that she will be playing cello on some of the tracks. It will also feature a couple of songs "which are probably the most explicit ones I've ever written." She enthused, "One's called 'It Ain't Over' and it's all about God turning things around, doing miracles. You know, we've all been in those situations where you don't know how it's going to work out and then God does something suddenly and it works out. Just like when Paul was on the road to Damascus or when Jesus raised Lazarus. That one's online, a video of it. And the other one's called 'Warrior' and it's about those times when you run away from God and he never ever lets you run away. He is relentless in his love. I was thinking about both Moses and Jacob when they took off their shoes and especially Jacob when he was wrestling with God. And sometimes we do that, we're like no, I don't want to go your way. And He says well, I'm gonna give you a new name. It's a very intimate song about Him just never leaving us. They're both on line, on YouTube."