Recent years have seen the reputation of jazz four piece Kairos Ensemble - hailing from London and surrounding areas - grow from strength to strength with their most recent albums receiving glowing reviews from the likes of BBC Radio 3, Jazz FM and a whole host of other jazz-based radio stations, websites and journals. Plying their own brand of inventive yet accessible instrumental jazz, the Ensemble - consisting of sax virtuoso Dan Foster, Peter James on keyboards, tuba player Richard Fox and Tom Hooper on drums - have continually honed their skills over the years to become one of the UK's most gifted and exciting jazz outfits.

Life for Kairos Ensemble started back in the early '90s whilst Foster, James and Hooper were studying at the Royal Academy of Music in London. Having teamed up with Richard Fox, who was studying at the neighbouring City University, the foursome soon started plying their trade in different bands before officially forming Kairos Ensemble in 2001. Since then, the group have found themselves playing in a wide range of settings including corporate events, churches, clubs, prisons and schools as well as conducting workshops and appearing either individually or collectively with major artists such as Grace Jones, Graham Kendrick, Talking Heads frontman David Byrne and the English National Opera.

In addition, Kairos Ensemble have released four acclaimed albums with 2002's 'The River' and the 2006 live offering 'Psalms' paving the way for two more recent releases that have caught the imagination of the jazz world and showcased the inherent talent of Foster, James and company. The 2010 James-composed Easter meditation 'Passion Suite' followed by last year's 'Rejoicing Blues' - a selection of previously unrecorded pieces from the band's live repertoire - have been described as "charmingly crafted and soulful", "beautiful music" and "an inspiration" by jazz journalists the length and breadth of the country.

I catch up with Dan Foster and Peter James in a break from their busy schedules - Dan is also a Baptist pastor whilst Peter teaches and directs music in a North London church as well as fronting his own jazz trio - to find out what makes Kairos Ensemble tick. "Basically, we want to do whatever we do for God's glory," advises Dan. "Over the years, we've done all sorts of projects and events and we don't want to see a sacred/secular divide in our music because it should be all for God's glory no matter where we're playing. We've all been good friends for years now and there is a chemistry between us. The friendship within Kairos is foundational and there's a sense that the end product is bigger than the sum of its parts."

Before finding out more about the group, I ask Peter why the name Kairos was chosen. "It's a Greek word that means 'time'," he clarifies. "There are a couple of Greek words for 'time' with 'chronos' being more linear in nature and 'kairos' being more about specific time. The word has a resonance in the Bible in terms of things happening under God's authority and in his time and, in terms of jazz, it's all about capturing the moment."

With four trained musicians making up the group - all of whom are virtuoso in their chosen instrument and in demand individually as session players - I suggest that it must be hard at times for Kairos Ensemble to come to any unanimous decisions. "It's a funny band because it's very much a democracy between the four of us," Peter advises. "Deciding what pieces go on albums and what
our repertoire should be is slightly torturous but everybody brings something to the table and the end product is richer for it."

One such item brought to the table and previously described by the band as its secret weapon is the tuba playing of Richard Fox. Richard takes the place of the traditional double bass player in a jazz foursome to offer up something just that little bit different. "The tuba fulfils the whole bass function but also has a melodic potential," confirms Peter. "There's also something quite regal about the tuba and there's a lighter-hearted comedic side to it as well. There's a whole load of potential in that instrument which I think adds a particular characteristic to the sound of the band. Blending Richard's tuba with Dan's sax in particular gives Kairos a special colour."

"Also, our drummer Tom Hooper really adds something to our sound," chips in Dan. "He's very versatile and he can put his hand to pretty much anything. He's technically excellent, a real virtuoso and very easy going. He really delights in the odd time signature stuff. Some drummers go slightly green when they're faced with things like that, but not Tom!" 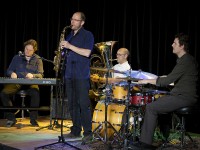 Focussing on Kairos Ensemble's last two albums, I wonder how the idea for the Easter-themed meditation 'Passion Suite' came about. "My approach to writing is going with whatever is on my mind," comments Peter. "I didn't set out to write a suite about Easter - it sort of crept up on me. I do remember wrestling with the Easter story and thinking about how we would engage with it as a jazz group. Doing something like 'Passion Suite' is a different challenge because you are creating a soundscape to certain scenes in a story and you have to approach it with a contextual understanding."

"I thinking playing the 'Passion Suite' live is very powerful," adds Dan. "It's been a privilege to play it and be part of that story - it really was a great way to enter into it. Playing on the likes of 'Resurrection' from the album allowed me to share in some small way in the resurrection power of Christ and you feel really connected."

It seems that the band took a different approach to recording the 2013 followup album 'Rejoicing Blues', as Dan explains. "On the new album, there are some new tunes but there are also pieces that we've been playing for quite a few years but never actually got round to recording. I guess we felt the wind in our sails after 'Passion Suite' and it felt like the right time put these songs down."

"The new album has its own shape and it allowed us to get back as a quartet and present the tunes in their natural habitat," suggests Dan. "Over the years, we've been playing jazz to non-jazz audiences and we've been trying to communicate our music in a way that means you don't have to be a hardcore jazz buff to understand it. There is some jazz that is pretty cerebral and leaves some people cold and we just wanted to do something that people would enjoy listening to."

Peter is keen to point out the reason for the oxymoron contained within the title of the new album. "Some of the songs have been drawn from the last 10 years and we've all gone through some really high celebratory moments in our lives and then there have been some heartbreakingly low times. As a result, the tension between rejoicing and the blues in our music reflects real life. It's very much a document of our lives over the last decade or so."

With 'Rejoicing Blues' succeeding in communicating the band's faith, feelings and passion without the use of words, I ask Dan and Peter to explain how they view the benefits of instrumental music. "I think in terms of our music being instrumental," Dan begins, "it gives our music a broader appeal because you can take from it what you want."

"I think that all music has the potential to be something that engages the heart," continues Peter. "I have a slight bugbear in terms of the Christian music scene. What is Christian music and does it only become 'Christian' when you put a lyric on it? Does that inherently turn it into Godly music? Also, even if music isn't written purely from a Christian angle or motivation, I believe it can still be God-invented music as it can still be something that glorifies God. There is something deep about instrumental and improvised music because there is the potential to feel that there's something of-the-moment going on. The presence of God could be in anything and it's about playing in that moment - something that links back to the word 'kairos'."

Despite a wealth of positive reviews of their recent work and ever-increasing airplay, it's clear that Kairos Ensemble won't be sitting on their laurels, as Dan confirms. "Pete's currently focussed on a dramatised musical he's written based on John Bunyan's book The Pilgrim's Progress which involves music from Kairos, a dramatic presentation from over 60 children and lots of other things. It's a very big and ambitious project which we're honoured to be involved in."

Peter pays tribute to his Kairos colleagues in closing to sum up the respect and camaraderie that helps make the group a success. "The comforting thing for me is that my friends from Kairos Ensemble are involved in this new project and I know that, whatever I throw at Dan, Richard and Tom, the result will always be exceptionally good."