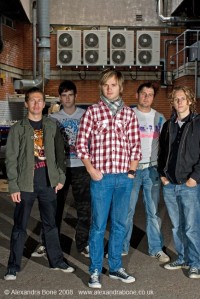 Anyone who's heard the six-song EP 'Piercing The Darkness' by Norwich-based Kairos will know that here is a band to be reckoned with. Enthused the Cross Rhythms reviewer, ".it's solid guitars, clear vocals, unfussy drumming, uncluttered background fills, well constructed songs and then a bit more. If you like the idea of power pop new wave post-punk brought up to date with the occasional Beatles-ish melody line, then you'll like this." Maybe it's best not to pursue the "power pop new wave post-punk" bit but one thing is certain, there is a freshness of sound about this five-piece. Not only that, there's also a serious spiritual intent. Said the band's bass player Tim Hamilton, "In this age of moral confusion, fatalism and lack of direction we want to bring a message of purpose, destiny and hope for a bright future. The guiding light of our lives is from the eternal author of life. Through our music and songs, we want the generations of our age to turn away from their lostness and find their true identity. If we can connect just with one person during our live performances, then we've done our job."

Kairos began in early 2007 when the annual talent search Ultimate Showcase began to tout for demos, offering the winner the glittering prize of a chance to play at Alton Towers at the annual Ultimate Event. Explained lead singer and guitarist Aaron Pimlott, "Kairos was formed when I heard of the competition. I guess we've always wanted to get together and form a band and the Ultimate Showcase was a great platform to get started on, so we thought we'd just enter and see where it would go. It was a mad rush, because we didn't have any of our own songs yet, and we had to have at least three original songs to enter with to have any chance. I already had a couple of songs written what would have been suitable to use. Then within the next six weeks I wrote a further four songs to make six original songs. All the guys who made the first EP 'Something New' was the Alton Towers line up. We had Mark Harvey as our main guitarist, Tim Hamilton on bass and Matt Buck on drums. We quickly got the songs recorded in my studio within that six week period. It was very exciting, we went from nothing to getting TV coverage pretty much overnight. It was surreal."

The Ultimate Showcase had over 125 bands jostling for the Alton Towers prize. Kairos won their heat and then the final, in part through playing freshly created music but also by bringing two coachloads of cheering fans to the final. Remembered Aaron, chuckling, "It was unbelievable. The hall in which the final was held was pretty much empty until the Kairos rabble showed up. The first band were standing up there, just about to get introduced onto live television, and then the hall fills with over 100 Kairos fans with massive KAIROS ROCKS banners, shouting and chanting 'KAIROS! KAIROS!' You can actually hear it in the background just as the first band were getting introduced. I did feel bad for the first band standing up there looking down on all of this. If it was me standing up there, I probably would have wanted the stage to have sucked me under to get away from the oppressive feeling of intimidation."

Kairos walked off with the first prize and were soon playing before 8,000 people at the Alton Towers event in May, 2007. Their 'Something New' EP was released and things seem to be going from strength to strength. Said Tim, "I suppose as time goes on, we look back at the Showcase as one of our high points, but to be honest, our tour in Portugal was fantastic so we're still excited. It's still very early days for us. We are still learning that it takes time and effort to build a successful band. We'll give it our best shot anyways over the next few years and see where it leads us. As long as we are communicating and connecting with people with our songs, then we'll be happy with that."

Earlier this year Kairos began planning their 'Piercing The Darkness' EP, booking time at Nutbourne's g2studios to work with hitmaking producer Paul Burton. Admitted Aaron, "It didn't get off to a good start actually! We thought we'd head down to the south of England the night before so we weren't tired from getting up really early and driving for five hours if we'd had left on the Monday morning. We had been on the road in our eight seater, 250,000 miles on the clock, Ford Transit for only 30 minutes. We had that thing weighed down and packed to the max. We usually hire a trailer but on this occasion we had less gear than what we would have if we were touring. Anyways, our van conked out and died on us, and we free rolled down a hill on the A11 and amazingly rolled enough to exit into a garage. A garage that sells fuel, not a garage that fixes dead cars, unfortunately. To cut a long story short, we rolled up at a Travel Lodge 10 minutes from the studio at 3am after being towed all the way. We found out that the fuel filter was the problem and got it fixed the next day at a garage just down the road from the studio. So our plan of being fresh for the first day in the studio failed, but we managed okay with just a few hours sleep.

"We got to know Paul throughout the week we were staying there, in a bedroom he had set up for us. Paul offered some great input into the production of the songs and we had to drop one because he just said it's just too good and he didn't want his name on something of that caliber. We agreed. (Just joking, it was absolutely rubbish and looking back we're glad it didn't make the cut!) So we came out with a six-track EP that we were really happy with. It was great fun working with Paul, and he definitely helped us raise it to the next level. Special thanks to his assistant Mark as well, he made great tea."

Aaron's favourite songs on the project are "Solution" and "Piercing The Darkness". Explained Aaron, "When writing for the project, I wanted to write about something real. I was aware of the other artists writing about their experiences in Africa and wishing I had something like that to write about. I've never been to Africa, I've never been to a third world country, yet. I've been infected with the Western world of living my whole life. I then realised I didn't have to travel to a third world country to find people who are hurting, they are right on my doorstep. 'Solution' is a painful but a real life story of a real person that I have come into contact with over the past few years. Despite the pain and torment that they have been through, there is rescue, there is a solution. And that's how 'Solution' was born. The melodic hook in 'Piercing The Darkness' is so catchy, it's just what the song needed. The lyrical inspiration came after watching Will Smith's movie I Am Legend. There is such a profound message in that movie, it's jumpy though so watch it with the light on! All of the Kairos songs aren't just written to have a nice catchy tune, every song has a purpose and message within the lyrics. The light does pierce darkness; we just need more people lighting it up around the world."

For more on Kairos visit the Kairos artist profile