The ranks of Christian dance pop are quickly filling. New America based Indian artist KARTHI proves to be a serious competitor to the likes of Lisa Beyill and Cindy Morgan. Jan Willem Vink reports. 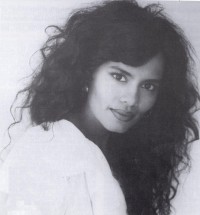 Karthi first got her feet wet singing backup for the Newsboys, Rick Cua, Cindy Morgan and Morgan Cryar. Soon after she was featured in music videos with DC Talk, Michael W Smith and Geoff Moore And The Distance. She grew up on a strong diet of Motown music, so when she started recording her debut album it was those tapes she played to her producers.

"Working with Joe Hogue and the Gotee Brothers (Toby McKeehan, Joey 'E-Train' and Todd '2 the T Collins) was a blast," Karthi remembered. "I always say it oughta be illegal for all these guys with blue eyes' to be that funky! We all grew up in different parts of America but when we started meeting to talk about records, it felt like we'd all grown up in the same small town and linked all the same kinds of memories to the same songs of Earth Wind And Fire, Sugarhill Gang, Commodores...

"We'd put in a favourite tape and start reminiscing about high school dances, first crushes, heartbreaking losses... Those were fond memories we had associated with those songs. We felt the same feelings all over again, the ones that had been tucked away deep in our hearts. I want to touch those places in the listener's heart with my own songs. Remembering how those songs impacted me and how much fun it was to feel those feelings again with my friends and producers. That's the kind of experience that motivates me to write more and strive for excellence in my songs."

Commented Karthi on the song "Are You There": "When I hear it, I often think of the girls in my discipleship group. They're asking God the same questions I've asked him so many times; Do you see me struggling down here? Do you really love me so much you'd rather die than live without me? Are you really in my corner?

"They're honest, heartfelt questions that people everywhere seem to ask," continued Karthi. "It's always been the most controversial song I've written. So I tried to change the lyrics a week before recording it to appease certain people that we thought would be bothered. But we went back to the original lyric and even kept the first vocal we recorded because it felt so real. I felt the integrity of the song was worth the risk of raising a few eyebrows. I'm really thankful my record company agreed with me. They let me keep the lyric honest and uncompromising. It's a ballad but it grooves hard."

Immigrating from India when she was five years old, Karthi was raised Hindu, even in her new American home. "Jesus chooses us no matter where we are," reflected Karthi. "My pursuit of him is really nothing more than a response to his pursuit of me. I finally started responding when I was in high school. There was a girl who was very popular named Christy. She was a senior and sang in all the assemblies. I was a sophomore and looked up to her, but she had only one drawback - she was a Jesus freak! I'd never met one so I was intrigued. I wondered, 'What gives this girl such an eternal peace?' She taught me how to have true joy and eternal peace regardless of my circumstances. She taught me that Christianity was not about religion. It is about a person! This one-on-one relationship drew me to Christ. I became a Jesus freak too!

"My mom had become a Christian 20-plus years before I knew about Jesus," remembered Karthi. "She'd kept it secret all those years. None of us knew. I came to believe about four years after I found out she was a believer. The summer after my rebirth, we were planning another visit to India. I understood why she had kept her secret but when I read Paul's statement in Romans 1:16, I'm not ashamed of the gospel of Jesus Christ', I shared it with my mom. We both felt we needed to tell our relatives of our new faith and relationship with Jesus on this visit. It took so much courage for my mom to say it. I felt so much respect and admiration for her and my faith was strengthened by her witness."

Some members of their family didn't approve of their 'new' found faith. "I've been accused by some of my Hindu relatives of becoming a Christian because it was 'the Western' religion," said Karthi. "I believe Jesus came to offer salvation to the world, not just one hemisphere. Besides, he lived and breathed and walked and talked in the Middle East."

Karthi thinks of herself as an Indian who is somewhat Americanised. "We've visited India several times since our move to the West. The things I love most about India are the warmth of the people and the delicious food. Also the most beautiful scenery in the world, in my opinion, is found there in Kanyakumari at the southern most tip of the country. It extends out in to the ocean on a peninsula so you see water for miles in almost every direction. There are white and black sand beaches, palm trees, tall mountains and acres of rice that sway with the wind. Whenever I go there to visit my family, I always think I'm getting a glimpse of heaven."

For more on Karthi visit the Karthi artist profile