One of the pioneers of radical new approaches to worship KARL ALLISON of Croydon's famed Last Daze, believes it's time the Church asked itself what the Alternative Worship movement is trying to achieve. 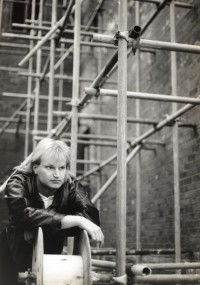 It seems quite obvious that Cross Rhythms should foster an interest in the development of alternative worship. After all, there would appear to be a simple idea and a clear aim at the heart of this undefined movement: to discover new ways of worshipping God that are more accessible to the unchurched of the '90s than the traditional services of any denomination yet created. And seeing as so much of our corporate church expression is to be found within the musical form, it follows that a key element in the "alternative" will be the use of more contemporary musical styles. Hence our belief that Cross Rhythms has a distinctive contribution to make to the whole debate.

Yet even a cursory glance around the alternative worship scene will show that it's not only the music that's up for grabs. It seems that nothing is to be considered sacred, that anything you can think of that's connected with a corporate experience of God can be re-evaluated in the apparent light of connecting with modern culture. The variety of experimentation has matched the variety of churches or other groupings that it has sprung from. Some have gone for the sensory overload approach, all technology and volume. Some have transferred high-church atmospherics and symbolism to a nightclub setting. Some pump out the sounds of the moment whilst others use no music whatsoever. Some proclaim and some discuss. Some have grown to be massive and some have appeared to stay deliberately intimate.

Indeed, the current climate of experimentation is such that one is wary of sounding a note of caution lest one's alternative credentials be called into question. And yet caution is exactly what I think the alternative worship movement now needs, for however stuffed up and irrelevant we may feel much of the church is, we are nevertheless dealing with a sacred institution, the very Body of Christ. This body is charged with a great mission: to express the truth as relevantly as we can without changing one iota of that truth itself. This is not a time for playing games or merely attempting to feed some weakness of our flesh to appear trendy. This is a time for great responsibility.

The danger as I see it is that the simple idea is at risk of being used for an agenda way beyond anything I've already described. Too many of the alternative developments seem to contain elements intent on exploring the boundaries of theology as well as our expressions of worship. It is undoubtedly true that we can always learn something more about an infinite God and that our mortal means of expressing his worth will always fall some way short, but nevertheless God is the same today as he has always been. The local fellowship, be it traditional or alternative, is a very dangerous place for theological experimentation to take place. Theology, at least in its most questioning modes, has always taken place at a distance from the congregation, and rightly so. It has been a necessary safeguard which has allowed Christian leaders to thoroughly examine its orthodoxy before it is passed on to the believers at large. When this defence is taken away, as some of the alternative thinkers are convinced it should be, it is likely that some vulnerable believers will be led astray.

The other danger of experimenting with the message as well as the medium is that Christians will be tempted to dismiss the entire alternative ideal in the belief that it has become utterly tainted with a liberal view of faith. Some of this certainly occurred in the backlash against the NOS service at Greenbelt in 1992. Whilst the secular media reacted against it through sheer incomprehension, many Christians reacted against it because they comprehended very well indeed! When NOS shot themselves in the foot they hurt the rest of us as well.

Now, I can't pretend that I'm not involved. Two years ago I began organising a series of alternative worship events that became known as the Last Daze. The policy was remarkably simple. I listened to a wide range of sanctified dance music and selected the tracks which I felt might encourage people to worship God. Using these tracks, I then planned a service which encouraged the youthful congregation to dance rather than sing hymns or choruses. The video screen effectively became the worship leader, giving instructions, scriptures and helpful images.

Despite all of this being a world away from your average church service (whatever that is!), I am left wondering whether many of today's alternative worship pioneers would even consider what I've just described as being truly alternative. Or to give another example, what would they make of the heavy rock celebrations that Australia has led the way in? Both the Last Daze and the Aussie celebrations still call people to worship God in ways that most Holy Spirit inspired churches would recognise, just with a bit more physical involvement and to a harder beat. Is it enough to experiment only with the forms in this way, or would some of the alternative organisers consider these changes superficial? It is not simply semantics to ask how alternative we have to be before we are alternative. To qualify for the title do we really have to go off in search of the missing link between organised religion, moral philosophy, quasi-New Age theology and a post-modernist worldview? When did worship get so complicated?

One explanation of this aspect of alternative worship may well be answered when we consider the question of who alternative worship is actually for. If my simple idea at the beginning is correct then it is for those who find the traditional church forms impossible to engage in because they are culturally out of reach. But there is the possibility that some of the alternative services have come about more to address the needs of those who set them up rather than the needs of the unchurched. I have certainly experienced one service where I felt like I was attending a private club.

Are these apparent pioneers setting up new worship experiences because of a desire to bring new people into the Kingdom or because they are disenchanted with their old church? If it's the latter, then I beg these people to examine what they are doing. Starting up yet more divisions within the Church is of no help at all. If you are disenchanted with your own church, it seems to me that the best thing you can do is to stay in it to make it better. Only when God calls you to do a new work for him (and not for yourself) should you consider going anywhere else. And if it's new worshippers that we seek, then they will need a clear message. They are more likely to be converted by what we do know about God expressed in ways they can understand than by a group of self-interested people trying to discover something new for themselves.

For all the diversity of alternative forms that we noted earlier, it may be possible to make two observations about the origins of many of the groups responsible. Firstly, there are a significant number of groups with Anglican connections and, secondly, there are very few indeed from what we might call the "new" churches or the charismatic wing of the church in general. Why is this? We should do well to pass quickly over the notion that it is simply because there are more disenchanted Anglicans than charismatics out there and seek a higher motive! (Many Anglicans are charismatics of course!) It may be that those from the older denominations are more used to the sense of mystery, of a continual search for a deeper faith, than those of the newer churches, whose outlook tends to focus on the full reality of God already being realised in their lives and therefore in their worship.

This sense of the ongoing journey of faith amongst Anglicans may well account, in part, for their willingness to examine new expressions. The charismatic experience does embrace the danger of falling into set patterns and traditions of its own more quickly than many of its adherents may realise. The temptation is to see God at work amongst them within the forms of worship that they already employ and so not see the need for any alternative forms that may widen the attraction of their fellowship to yet more people.

It would also be true to say that many of the new churches already employ styles of worship which are closer to being truly contemporary than your average high Anglican! The worship chorus phenomenon does tend to leave most of its churches somewhere in the 70s.

This introduces still a further point. What exactly are alternative services alternative to? When we speak of churches being culturally relevant in their worship, what target group are we speaking of?

Surely a congregation of truly worshipping pensioners is as wonderful to behold as a church full of grooving teenagers. The problem is that we tend to think that a church can only cater for one congregation at a time. I believe that history will prove us wrong to have restricted churches in this way. And yet I also believe that different services for different tastes is the way forward. The answer is surely to hold different congregations within the one fellowship. We must take care to preserve the unity of the Body, and this can be done through fellowship events within the church and possibly in joint acts of evangelism and service.

In conclusion, I want it to be clear that I think it's a great and even vital work to be exploring what worship can look and sound like in the 90s, but we must be very clear about where the boundaries of that exploration are. Everyone involved in the cultural revolution of worship is making it up as they go along and the worst thing that could happen is that someone tries to regulate it. It has to be creative and specifically tailored to the local target group. There can never be, I hope, the "Alternative Worship Songbook"! But it is this very spontaneity that demands careful self-regulation. We need to be discovering doctrinally sound, evangelically based alternative worship.

So if you are involved in the scene or if you come across an alternative service, ask yourselves these questions: what can and what can't be changed? How does it connect to the universal church? How central to its activities is the Word of God? How accessible is it to the unchurched?