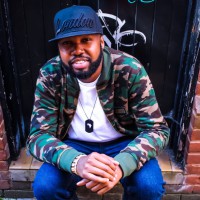 Across the globe, there is a sense that hip-hop is an ever-expanding genre with new acts popping up every day to offer up their own slant on a style of music that constantly shape-shifts and reinvents itself. Whilst hip-hop in its various forms now dominates mainstream chart music, its true treasure lies hidden just beneath the surface with countless acts in various local scenes forging and perfecting their chosen art form in exciting, inventive and resourceful ways.

One such act is London-based rapper Karl Nova who, since 2009, has released no less than seven albums plus a string of mixtapes and singles that have connected with an increasingly wider audience whilst he himself possesses a restless creativity that means that his output is never the same twice. With albums like his sample-heavy debut 'Just As I Am - The Prequel' right through to the acclaimed 'For Such A Time As This' last year, Nova has carved out a niche for himself as a purveyor of innovative and meaningful hip-hop that transcends musical tastes and has its roots planted in his own Christian faith and everyday experiences.

Not limited to music, recent years have seen Nova's creativity spill over to areas such as blogging, podcasting, writing and radio presenting whilst his first book - a collection of verses with backstory called Rhythm & Poetry published by Caboodle Books in 2017 - has just been short-listed for a Centre For Literacy In Primary Education (CLiPPA) poetry award. In addition, Nova has become an in-demand creative writing workshop facilitator in a variety of schools around the world ensuring that he is not only expressing his own creativity but also helping to raise up a new generation of poets, writers and rappers.

As if all of that wasn't enough to prove that Nova is constantly inventing new ways of expressing himself, a half hour delay in starting our phone interview further highlights the prolific nature of the man. After a number of unanswered calls are placed on his mobile after the agreed start time, it turns out that the muse had grabbed him and he was midway through creating a new track that, he assures me, is "a special one". The man's obvious enthusiasm for his art and life in general instantly smooths over any non-existent inconvenience whilst his engaging and affable nature - often talking at a million miles an hour in order to get each new thought out there - highlights the passion he has for what he does.

I start by asking him if he is happy with the reaction to his latest album 'For Such A Time As This' and he is immediately honest about the challenges of making music in the current age. "Making an album and being an independent artist is very, very difficult," he confesses. "After you create something, you then have to find ways to push it out and get it into the hands and the ears of people. However, the response to 'For Such A Time As This' has been great and it's been coming from the most unexpected places. I've been getting messages from people in places like Costa Rica, Australia and Singapore which is amazing. I feel that this is probably the best body of work that I've made since my very first release. The new album really captures what I'm trying to say in every way and I'm pleased with it."

Karl goes on to explain something of the ethos of the album. "I set out to make a record that was real and I wanted the words to come as honestly as possible to reflect what we're living through in these current times. We're living in crazy times - there's a lot of political upheaval and social stress and that's what I wanted 'For Such A Time As This' to reflect. I made this music whilst I was responding to what was going on politically and socially in the area of London where I live. I was just making it as I was living it."

One particular track on the new album reflects on the increased threat of terror and danger in Karl's home city and I ask him to explain a bit about how it came about. "I made the track 'Calm' at the end of 2016 and there was a lot of tension in London at that time. Nothing had actually happened at that point but, every time I went out into the city, I always felt a tension in the air. There was so much talk about the next terror attack and there was a lot of knife crime in my area and, as I was going out, I started telling myself just to 'stay calm'. Only a couple of months down the line, all sorts of things started happening in London. There was the guy on Westminster Bridge who drove into the Houses of Parliament then there was a group of Muslims who got run over in Finsbury Park plus the attack on London Bridge - these were all places I could easily have been at when those things happened. The song 'Calm' suddenly became more tangible to me due to the fact that I was actually living through these events."

I explain to Karl that I first listened to the song 'Calm' a few months after my own daughter escaped - thankfully unscathed - from the terror attack at Manchester Arena in May 2017 and that its message seems to transcend musical genre in order to resonate with the listener. "You know what - that means that my track was accessible and I set out to make the album for anybody who appreciates music, poetry and words whether they're into hip-hop or not. I'm so pleased to hear that you, as a person who may not necessarily be into this kind of music, got into it anyway. At the end of the day, it's all just music. I might not listen to a lot of heavy rock but, when I hear something good, it gets to me and it grabs me and that's what I try to achieve with my music. Hearing you say what you've just said makes me very happy."

Putting his current output to one side for the moment, I ask Karl to go back to his very first release and to take us on a whistle-stop tour of subsequent albums. "My first album was called 'Just As I Am - The Prequel'", he obliges. "I released it in April 2009 and it did well in the iTunes chart. After a few months of it being out, somebody gave me a bit of advice in relation to samples and copyright clearance and, at that time, I didn't really know much about that side of things so I had to pull the album off all of the online platforms at the end of that year. After that, I released some of the tracks from it on a mixtape called 'Deleted Scenes' and then I uploaded the album - with new tracks replacing the un-cleared samples - back onto iTunes in June 2010 as 'Just As I Am - The Prequel (Reloaded)'.

"In the middle of all of that, I went to see a friend sing in the band Basement Jaxx and I got to go backstage to meet the group," he continues. "I was so inspired by the gig that I wanted to make the kind of music they were making straight away. I ended up running to the studio to record five songs in a session and that became 'Skanksgivin'. It was something I did for fun and it was the start of a really good year for me. I was travelling a lot, doing Greenbelt and lots of festivals and carnivals in the summer.

"In 2012, I released 'Delayed But Not Denied' and it came about because GK Real, a gospel vocal group I was in at the time, went on an extended hiatus. One of the producers of GK Real was Emmanuel Edwards and he suggested I do an album with him so we started work on it in 2010. By the time 2012 came around, we were still making the album and I got very discouraged and frustrated at how long it was taking to make. I was originally going to call the album 'Seven Days' because the whole concept was supposed to be about what you would do if you only had one week left on earth but, because the process was stretched out for so long, I changed the title to 'Delayed But Not Denied' and it finally came out in September 2012."

It seems that the length of time that particular album took to make had an initially detrimental effect on Karl. "Because of the whole experience with 'Delayed But Not Denied', I got really discouraged and nearly quit music," he admits before hinting at his trademark resilience. "However, just shortly after it was released, that experience prompted me to learn how to make beats for myself. I wanted to be truly independent and to not have to rely on anyone else to make my music. The way I had been doing meant it would cost Â£300 just to get the beat and then another hundred pounds to pay for the music session and then more money to master the track. I knew that, if I wanted to keep making music, I had to find a way to be self-sufficient.

"I found out that I could make beats on my phone using an app called iMaschine and you could basically have a whole studio in the palm of your hand. Very soon, I became very good at it and I began to share what I'd done with my friends. In 2013, I decided to throw some singles out that I had made on my phone and the first thing I put out was a track called 'Mahalia' which included a sample of an old hymn by gospel singer Mahalia Jackson called 'Just As I Am'. The response was so good I shot a video for it and then I released two more singles called 'Invincible Joy' and 'Stadium Music' followed by an instrumental album called 'Made 'Em On My Phone'. I was trying to show that it was possible to make something out of very little and it really worked."

Keen to share what he had already learnt as a fledgling independent artist, Karl then set his sights on nurturing the wealth of upcoming hip-hop acts that were bubbling under the surface. "In 2014, I had an idea to build a live event or website platform where I could host and expose the talent that I was discovering. At that time, I had been a radio presenter on Premier Gospel for a couple of years - I had a show called The Writer's Block and one called the Hip-Hop Sessions which went out every week on prime time - and I was discovering loads of talented people every single day. I had this idea of doing something called PLTFRM SE7EN to help struggling artists get their work out there. It ended up becoming a compilation album that was only eight songs long but people responded really well to it."