Kate Miner: Worship From The Strip 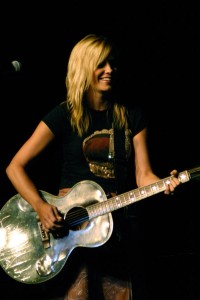 On a wet day in May, Kate and David Miner are guests on Rimmerama, playing some songs live in Cross Rhythms' session studio. I am elsewhere in the studio, next door broadcasting live and occasionally earwigging what they're up to. Mary Mary's "Shackles" is playing and suddenly I catch David playing some outrageously funky bass along with the song. OK, I'm naughty but I can't resist pushing up a fader and sharing his impromptu performance with my audience! They laugh when they hear what I've been up to! These guys have musical talent and Kate is one of the most passionate worship leaders I have ever witnessed. The couple are worship leaders at the Vineyard church in Malibu - nice gig if you can get it eh?

Recording the worship album seems like a straightforward enough idea. Kate explains, "We took over the Roxy on Sunset Strip two nights. Sold it out both nights and worshipped. It's just a live worship concert. It was awesome and it rocked. Worship is so powerful and the Holy Spirit was moving, it was awesome." But it wasn't that simple as Kate shares, "I felt pretty confident until the first night was over and then I felt like I needed never to do it again. It was really frightening."

The problem was that after the first night, Kate had only managed to record about five per cent of what she needed to do and the pair had spent nearly all their budget! Uh oh! She explains, "That first night was amazing worship but there are things that happen during worship that technically sound fine in passing but you don't want the wrong cord or the cracked voice to stay there for life on a CD. Thankfully, Tuesday night was completely blessed. There was an anointing there. Technically it was flawless. What's on the record is primarily one night. We didn't really compile two nights like we thought we would be doing. I'm really glad it's over but I love what we were able to get out of it." David chips in, "Kate and Carl Tuttle were both very insistent that we do it live and having been through the process enough, I was cautioning them that it was a highly risky proposition. At the end of Monday night we drove home and I was wondering what I was going to tell Carl!"

Disaster averted, the release of the live album is the culmination of a difficult journey for both of them. Kate had tried to get a mainstream deal. She says, "I had some minor successes around Los Angeles as a songwriter and a singer and that was all well and good but I had no purpose. I was courted by nearly every major label in Los Angeles and turned down." Dave adds, "That was the really odd thing because they would all get up to the last step before signing a cheque and then they would change their minds. In retrospect it's clear that God was shutting doors." Kate continues, "I love hindsight. You know in that desert experience we suffered financially, it was really hard on our marriage and it nearly tore us apart and I look now from this vantage point and look back and think this is so amazing to be doing what we are called to do. It's a wonderful place. I couldn't be sitting here doing this now if I had not chosen to walk through all that stuff."

Through the painful journey, God had to deal with a lot of Kate's attitudes as she chose her direction. She laughs about it now, "I'll tell you how I made my big decision. I was told, 'Kate, you've been given these talents and you've been blessed with this thing. You can go into the world as a Christian and sing or you can go into the Church and sing and minister to the world through that. There will be blessing for you because both of those things are obedient. Which will you choose?' And I decided to go out into the world as a Christian and sing in clubs and that whole thing because then I'd be able to drive the car that I wanna drive because that will pay. If I'm gonna be blessed in either category, let me just go out and do this. That was me at my most beautiful, vain, gross moment. Driving home I thought, 'I bet God doesn't like that and that he's gonna have something to say.' The next time, when I was leading worship at church, I turned around after this amazing moment of worship that was God's gift to me and I put down my guitar and I said, 'That's it, that's what I'm meant to do.' I have not stopped and I have just refined my vision and talent to do the worship thing. That's all I wanna do. I don't care about being a singer/songwriter with any sparkly tiara and title, I'm called to worship, that's all I'm interested in doing."

It's evening time and Zion Christian Centre in Halesowen is laying host to an evening of worship with Kate Miner. She may be diminutive in stature but don't be fooled! She packs a vocal punch and as she unleashes song after song in praise, people go with her, deeper into God. She tips back her head to praise and you can sense an anointing that allows the evening to shift gear from the quietest whisper of worship to the most passionate praise and then back again. It's an inspiring evening and Kate has the freedom to pursue God in her own unique fashion. David confesses how important this is. "Carl Tuttle was the first person to give us the resource to do something without wanting to dress it up to sound and be like something else. It was a pet peeve of mine with people that would hover around Kate and try to entice her into particular deals that essentially took what was so unique and special about her and package it into another thing."

Kate's husband has been in a unique place himself, encouraging Kate on her journey. He remembers, "She actually started leading worship at our church when an old friend of mine who was the worship leader there started being unavailable to do that. She was a background singer and stepped up to fill in. I think those few years of her 'relying on her chops' was a learning experience where she got into a place of understanding what she was called to do. She took this amazing performance ability and basically, completely sacrificed it to God. When she's going for it in worship, she has a gift to enable people to come with her because she just makes it easy for them. She didn't sacrifice any of her edginess or her passion or any of that to be polite."

Coming from her performance background, there could be a danger that Kate's worship leading would be more of a performance than an interactive inspiration to allow people to draw closer to God themselves. "It is a danger," she responds honestly, "and certainly when I was younger physically, emotionally and spiritually it was really easy when I sensed a hesitation to rely on my chops. I can sing, but big deal. When things weren't going right it was easy to manipulate. I was as good at that as anyone else is now and that was the mode that I would slip into. Now, I feel although I'm a worship leader at my church and I take that out on the road, it is my job to lead in worship which means that I have to be mindful of the band and of what's going on in the congregation. When all else fails, instead of relying on my chops and manipulation, I just remember what I'm called to and that's to worship. That's all I stand up there and do. I have to be mindful of what's going on around me but it's all about worship. I no longer need to drag the rest of the stuff up there with me. I know what God's called me to and it's to worship and if I'm obedient and faithful in that, the rest of it's gonna follow. People are gonna feel comfortable and it's gonna flow."

The autumn will see Kate back in Britain for worship conferences and other events to coincide with the release of her album through Word. After catching her live, I am not going to miss the chance to spend another evening praising God as she leads worship. Clearly Kate Miner is experiencing great joy as God takes her on a journey. She comments, "I used to think that God didn't want me in music or want me to sing and that's because I enjoyed it so much!" She sighs, "How blessed I am."