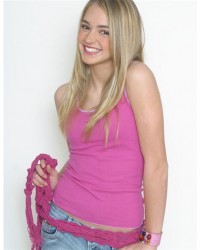 With the emergence of a more sophisticated Tween culture in the late '90s with its own radio and TV platforms, the Christian music scene has seen a number of young artists coming through aimed at that market. Whether through pop talent shows or record company A&R discovery, the mainstream pop career starts here for teenage artists who are content to create squeaky clean pop for their peers. Katelyn Tarver's engaging, infectious album 'Wonderful Crazy' on TC Music may not have received a UK release but the track "Something In Me" has made it to the giddy heights of the Cross Rhythms radio playlist. Now I am sitting interviewing her in her publicist's suite.

Katelyn Tarver looks every inch the teenage pop star. Blonde, beautiful and with perfect teeth, she is charm herself. Kevin Max, who is served by the same publicist, is tapping away searching the net on a laptop in the corner and Katelyn's father is looking after his daughter. After introductions are made he hands me a flyer for a tour that Katelyn is doing with Radio Disney which everybody seems really excited about but I'm not sure how relevant it is to the conversation except that Tarver is excited about the opportunity.

So what do you need to know about Katelyn? She was born and raised in Glenville, Georgia. "It's a really small town, like two stoplights small! So growing up in a small town has its good things and its bad. Good things being that you can go outside and play. You don't really have to worry. You can leave your doors unlocked and that's kind of cool. But there's not much to do! But it's good. It's kind of like having a big extended family."

At 16 years old, she's a sophomore at high school but because of the music career is being home-schooled for the first time. "It's my first year home-schooled so it's been pretty easy," she shares. "But I don't really like home-schooling all that much because it's kind of boring. I have no friends to talk to! But it's convenient. I can just get myself done but it's still a lot of work."

Katelyn was brought up in a Christian home but decided on doing pop music. She says, "My parents are Christian and I've grown up in church. And I'm a Christian. My music is pop. My CD is pop music but I'm a Christian and I feel there's a real need for a positive person in the mainstream. I feel like God has opened up a lot of doors for me there and I'm excited to see where he leads me. It's just been really great so far." 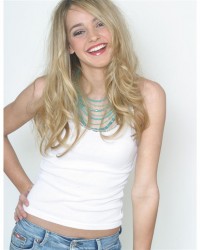 She's aware though that if she becomes more successful then the pressure will be turned up. She says, "I just have to keep my relationship with God first. I think I'm going to be okay. My family is always supportive of me, and my friends. They keep me pretty grounded and centred. So maybe I won't go too crazy!" she laughs. "I have a great family. I've liked being brought up as a Christian. It's been good. I just want to be a good example. I want to try to not give in to the pressures but be someone they can look up to. Just be a positive person. I haven't gotten into too much pressure with Hollywood and stuff. But I'm sure it'll come. I'm 16, I'm bound to make a mistake but hopefully I can stay on the right track."

Originally Katelyn had been interested in gymnastics. She remembers, "I was a gymnast for six years almost. I always thought I'd be a gymnast but I just fell in love with singing and performing. I performed in church and festivals - small town festivals and talent shows. I love to perform and sing. So when American Juniors came round and I got to sing in Hollywood all summer on a national television show I knew that's what I wanted to do."

It's quite some leap to be the southern girl from small town Georgia to appear on national TV in Hollywood. How did the leap happen? She recalls, "I was watching American Idol and I always thought it would be so awesome if they had one for younger kids. And then one episode the host said that they were. I got so excited. My younger sister and I and my parents, we drove to Chattanooga, Tennessee and I was one of the first to audition. I was so nervous. I was thinking there was going to be all these amazing young talented people but when I got there I was thinking, 'Well I might have a shot!' I made it to the Top 60 first. We went out there and we learned a song and dance. They kept cutting people and then eventually we had the Top 30. And then while we were still out in California it was one of the last auditions and you found out if you made the Top 20. Which was the big cut because the Top 20 got to be on TV at least once. So we were all nervous and we got into the room and they were like, 'We're going to send you home and we'll call you in a week and tell you if you made it or not because the background checks aren't done.'"

So the tensions mounted and while the show were checking Katelyn's closet for skeletons, she was back home and back in the gym class. She was at a gymnastics practice when she found out she was in the Top 20 and would be appearing on national TV. "I was so excited," she admits. "They flew me back out and I sang 'Ain't No Mountain High Enough' for the first show. And I ended up making the Top 10, which was crazy, you know?! A girl from this little small town in Georgia and now I'm on this national television show out in Hollywood. But it was an awesome experience and I had a really great time."

Sadly, unlike the grown up American Idol, they didn't do a knock out to find a final winner so Katelyn was joint 10th, or is it joint first with 10 other people? Whatever, it was the best placing you could get. I guess in true American fashion, they wouldn't want the delicate self esteem of the performing teenagers to be wrecked by not winning! "They made it a group because it was young kids. They didn't want them to get traumatised if they got cut. So each week you would get voted into the group. I was never voted into the group but I was in the Top 10 and got to sing each week. It was still good." 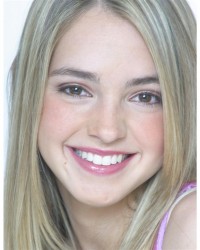 In such a small town, there was obviously much excitement about Tarver's progress. "People were so supportive of me," Katelyn remembers. "It was like this big thing: 'She's on national television!' They were great. They were really supportive. All my friends were excited. It was cool."

It would have been an obvious step for Tarver to go into Christian music after such a high profile exposure on TV. Other finalists in American Idol have recorded Christian music. Why did she decide to do the pop thing? "A lot of people ask that," she exclaims. "I think after the show we just had a lot of contacts in the pop world. I really believe that God has opened so many doors for me in the mainstream. You know, sometimes I do think, maybe I should be a Christian artist? But maybe I will get to reach people that Christian artists can't because maybe they'll come to my concerts. Sometimes only Christians will go to a Christian concert and maybe someone who's not a Christian will come to my concert and I can just live my life and be who I am. Just be a witness for them by the way I live my life."

Talking to Tarver about her songs does not illicit much of an in depth response. In some ways, it's clear that there are some songs on the album that she's not so keen on. Enquiries about songs get the same response from her throughout the interview. "'Everything' is a cool song. It has a reggae-type island feel. I like it!" or "'Rain' is just a fun song. I like it. It's fun to listen to." or "'Brand New Day' is a really cool song. It talks about how everyone has bad days and about starting over and having a brand new one."

It's clear that Tarver's 'Wonderful Crazy' is pretty much disposable pop and that Tarver herself is not really engaged by the songs. Does she find it difficult singing other people's songs and words? She responds, "It's not too bad. I mean, I didn't really get a chance to write on this first album. I've tried writing myself and for some reason it never comes out very good! But I love performing on stage so that's what I love to do. I think it would be so awesome to be on a big tour and sing on a big stage in front of thousands of people. And sing in big arenas. That's one of my dreams. And hopefully stay true to who I am and be successful."

I've interviewed a number of artists who were thrown into the spotlight in their early teens and quite often there are issues when they hit their mid 20s. Does Katelyn have any misgivings about what she's doing? "Well sometimes I think, 'Maybe I should just be a normal kid?' But I still see my friends a lot. A lot of people don't get to do this at such a young age. I've gotten to do a lot of neat things and if it all stops now it'll be okay because I've gotten to do so many cool things. I don't know. Maybe one day I'll think back that I shouldn't have done it but I don't really think so."

Katelyn is so cool!!!

katelyn went to my high school!!!

Katelyn came to my school twice and i got her autograph and she had two shows and i had front row !!!!!

i love you katelyn tarver! i'm your number 1 fan

hi katelyn! you're so beautiful! i love you so much! you rock!

youR SO BEAUTIFUL I HOPE ILL SEE YOU THERE IN HOLLYWOOD NEXT GENERATION!!!!!!!!!!!LOVE YOU