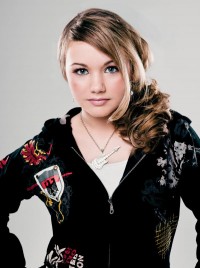 American Christian music has been launching teenage singers onto the scene for years now. Amy Grant was 16 when she released her first album, Rachael Lampa was 15 and Jaci Velasquez was 12. So it shouldn't come as too much of a shock that Red Hammer Records have recently released the 'One Girl' album by 16 year old Katelynne Cox. The Portland, Oregon-born, Camas, Washington-based singer describes her music as "positive pop with some throwback '80s guitars" and her album, produced by Aaron Rice, has plenty of memorable hooky songs like "Prove 'em Wrong" - an exhortation to anyone who's been told that their faith is only a phase they're going through; "Ordinary Day" where Katelynne reminds us that God can turn the ordinary into the extraordinary; and the album's current single "Me". Says the young singer, "The song 'Me' on my new album is about realising that you have to give your whole life to God, not just parts, and follow his plan because ultimately he chooses your destiny. It's important to understand that you can't stop the inevitable and that he is going to take care of you, you just have to have faith."

Brought up in a home with deeply committed Christian parents music and acting have long been a part of Katelynne's life. "I've been singing before I could talk.but my first performance was when I was five years old, and I was cast as Dorothy in the Wizard of Oz at Children's World of Music."

She says her family have been her greatest supporters. "I'm so blessed to have a Mom and a Dad that love and support me to the core and that each of them found equally as supportive partners! They mean everything to me and they encourage me to keep reaching for my dreams! Also, one person that has continued to support me and teach me things far greater than what I could imagine is my executive producer, Darren Bowls. Something I always live by, is what he told me: 'You haven't failed until you've quit'. That means so much to me and I hope it inspires all of you too. I know that I will keep pushing and pushing and do the best that I can."

Despite her happy family environment growing up wasn't easy for Katelynne as she was the victim of bullying in school. As a result, she had to change schools nine times. "It was a struggle. It was hard to just brush it off. In eighth grade, I was attending a private school and I switched schools because my parents wanted to transfer me into the public school. I got called words that I didn't even know, that I didn't even understand. I had to look them up or ask my parents what they meant. I had threats to kill me. I had people stalking my house and people got arrested for some of the stuff that they were doing to me." 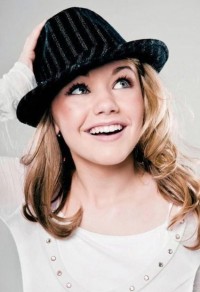 There's a common misperception that only socially awkward or "nerdy kids" become the target of bullying when in reality, beautiful, over-achieving students are also frequent victims. For petite, pretty Katelynne it was a living nightmare. As a sophomore, she was tackled in the hallway and sprayed with foul-smelling men's cologne. On another occasion, her cheerleading uniform was stolen to keep her from cheering in a big game.

She was scared and miserable. For a while she tried to escape the abuse by trying harder to fit in. She dyed her hair black and tried to blend in by changing her appearance and developing a tougher attitude. She admits she put her faith on the back burner, but God drew her closer again and taught her important lessons. She learned her true identity was in Christ and his plan wasn't for her to conform to the world, but to use her gifts for his glory. "I started going to church again," Katelynne says. "I sang at a church and realised that the Lord's plan for me wasn't to act like everyone else. It was to pursue my dreams. I know he has a plan for me and I plan to keep following that and trying to see where he wants me to go."

At the age of 14 Katelynne recorded her first album 'Unbelievable'. Now it's 'One Girl' which is pulling in radio play Stateside. She says, "I chose songs that I feel I can relate to and things I've experienced and that other people have gone through too. Every song is a little piece of Katelynne. I want my audience to get a feel for who I am through my music and be able to relate to me and my life. I want people who have faced the same hardships I have to know that they aren't the only ones and that I know what they're going through. I want my listeners to be inspired to do what they love and be who they are. I think the song 'One Girl' has a great message about standing out in the crowd, having your thoughts heard, and being beyond the status quo."