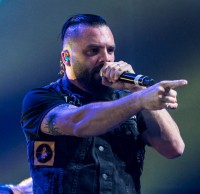 Never a year goes by without France's Hellfest, held near Nantes on the Atlantic coast, drawing a bunch of Christians, despite the name of the festival. Some are onstage performers, some are fans in the crowd, and a few are having a drink in the press/VIP area. There are Christians outside the gates as well, meeting the festival goers to provide free hugs, muffins, white roses, Bibles and prayers. And sometimes, a small handful of Christians are there to protest against the festival.

Notable among the Christians onstage at the 2016 Hellfest was Killswitch Engage's vocalist and lyrics writer Jesse Leach, also a member of side-project Times Of Grace. I met up with him and we talked about faith in God and musical creativity as well as about the drawbacks of the "metalcore" label. Here's what we said.

Jonathan: You've been on the road a while, haven't you?

Jesse: We've just been in Hungary, Slovenia, somewhere else. . . Budapest is incredibly beautiful, I was blown away. I didn't want to leave, it's incredible. That's my favourite part of touring, just getting out and being able to see cities, appreciate the fact that I'm traveling the world.

Jesse: From what I've seen it's good reviews. I really try not to pay too much attention. Because I really put my heart and soul into that record, so I hope people will like it. And if they don't, I don't wanna hear about it.

Jonathan: We've heard rumours of more from the side project Times Of Grace.

Jesse: Yeah, one night Adam showed me six songs he's been working on. He keeps talking about it so it's a matter of when he decides to start working on it with me. The direction is a bit different. We really wanna get away from the whole metalcore tag, which I think we're trying to do with Killswitch too, like broaden and expand out and just play music. So with the Times Of Grace stuff there's gonna be some acousticy bluesy stuff and it's gonna be an atmospheric sort of metal without all the screaming and typical stuff. We wanna really separate Times Of Grace from Killswitch and make it its own thing. More artistic, you know, and less thrashy. More epic. So if we do, when we do, it will be that style.

Jonathan: Back to Killswitch Engage, it's too early to talk about another album. But presumably there'll be a lot of touring?

Jesse: Yeah, we're definitely gonna tour a lot, but we've talked about not allowing three years to pass without another record. We've already talked about ideas and for me, what excites me on the new record is a song like "It Falls On Me" that leans a bit more towards the slower and more emotional, with a more rock thing coming in. I love the idea of expanding our sound. I love the idea of becoming hopefully in people's eyes a "metal" band. And that whole metalcore thing just hopefully going away. We wanna grow as a band and not be defined by a genre. I think we're all excited to keep pushing that boundary a little bit more. Not go too far, or we'll lose people, but give people a little more variety than what we've been putting out.

Jonathan: What about other projects? You're a very productive person. I was looking back over some of the internet stuff about you. You've done things, you've been places. . .

Jesse: I got a lot of stuff in the works in my head and in my studio at home, but nothing with confidence that I would be showing anybody. I started doing ghost-writing, I ghost-wrote for a death metal record that will be coming out soon. I wrote all the lyrics. Very excited about that one. I can't talk about that quite yet. Then I started ghost-writing in New York City with a couple of hardcore guys writing music for soundtracks. Stuff that I'm gonna have behind the scenes and hopefully start making a living of money so I'm not poor. But other than that, ideally for me, someday I would love to put out a punk-ska record. Like in the vein of The Clash and Operation Ivy. Like that's my favourite kind of music and I've got ideas rolling for that, we'll see.

Jonathan: Anything outside of the music realm?

Jesse: I've been cooking a lot and rubbing elbows with a lot of chefs, and when I travel, going to a lot of restaurants. So food is definitely a big interest of mine. Not sure where that will take me but I am certain my future is going to have something to do with food, cooking, restaurants, something along those lines. It's bound to happen.

Iâm a 17 year old Christian and Iâm a massive metal head, I absolutely love Killswitch engage but I noticed the change in lyrical messages from the first two albums compared to the last two and how Jesse moved from Christian messages to more humanist messages and it made me a bit sad as a Christian but it seems heâs still got the faith and I understand his stuggles. Overall, a fantastic interview and a really great topic that 100% interested me!