Kim Dexter: The Californian pop singer with her debut album

Pop singer KIM DEXTER is toting her first solo album 'So This Is It'. She met up with Mike Rimmer. 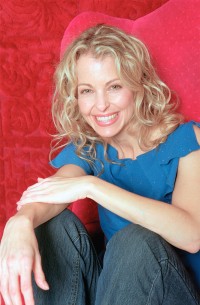 Every now and again an American artist visits these shores with a minimum of publicity fanfare. This is what happened to Californian pop singer Kim Dexter, whose independent album 'So This Is It' is a delightful mix of high energy pop fun and heartfelt ballads. Kim is, in fact, no stranger to the UK. She once visited England as a member of The Continentals, those glinty-toothed purveyors of MOR harmony which once regularly toured the world in decades past, while more recently Kim was lead singer of Mayfair Laundry, a pop ska rock band who scored a major turntable hit on Cross Rhythms with the song "New And Improved".

Like many Christian music artists from America, Kim was raised in a strong Christian family. She was six when she became a Christian and remembers, "My parents were strong Christians and they just modelled it for me. And as well as having the example, I felt this inner drawing that took me right to the Lord. I heard the truth and I recognised it. I just wanted Jesus. So he really won my heart and I took off from there, walking with him."

Mayfair Laundry recorded a couple of albums for the now defunct Pamplin record label. She remembers, "I was kind of thrown into the band to promote the first record although I was not the original singer. I lived in a different place and I joined up with the band in Southern California. I went out and did tours and then Paul Dexter (Mayfair Laundry main man) and I went out on our own and made the next record, which was a joint venture. Not so many other voices involved in that."

At the time Kim's ambition was to become a Christian rock'n'roll star. She reflects honestly, "I've grown out of it now but that was my pursuit from the time I could breathe and sing. I just wanted to be a rock star for Jesus! I want to spread the Gospel but I wanted to do it on a big stage with bright lights!" She laughs and continues, "I was sad when the band broke up but things are much better now. That was the time too where I just kind of said, 'Okay God, just do what you want with my music, with everything.' This is the path that I've gone down since. So it's much more peaceful."

The band got dropped by their original label, Pamplin, who subsequently went out of business, only to sign for a smaller label which also went bust. Around the same time Kim's marriage was also in trouble and a lot of the songs on 'So This Is It' were penned when she was going through her divorce. She reflects, "I'd never experienced anything like it in my life before. Just a pain beyond anything, where I felt ill in every way. Just physically, I couldn't really separate what it was. Who I was and everything was just falling apart. I really could not find much peace or much joy.at all. When I would go to the piano and just play and sing, I really felt the peace of God. I felt like that was one of the nearest places I could be to God, other than just reading the Bible or being in some kind of really close-knit Bible study. I would just play and sing to him and it's like he was there, you know?"

Before I can answer that yes, I do know, she continues, "Music was a place where I could get my emotions out. I couldn't talk to my husband who was gone. I couldn't do anything. I felt completely helpless. But it felt like in my songs, I could express all that I was feeling, all my anxiety and work through it in my songs. So I guess I hope that maybe some other people will be able to do the same thing when they listen."

In the aftermath, like many people who go through divorce, Kim discovered that the hurt and confusion can be overwhelming. She remembers, "I had a really hard time sleeping and sometimes just felt really hopeless. Literally knowing all that I knew, that God had been there for me my whole life and blessed me in so many ways, it's like I should know that there's hope. That God can do anything, anything. But I just felt like - I can't do it. I'm too weak. I can't allow him enough to do it. But when I would play and sing it was a place to meet him and it was a place to feel encouraged and experience a bit of hope. I could just hold onto that."

Kim discovered that there were Christians around her who supported and helped her through the pain of her marriage break up. "I so needed help," she confesses. "I literally just needed people to carry me. But God brought them to me. I didn't even have to ask for help. Anonymously, someone who was just an acquaintance, would come by and I would end up pouring my heart out to them. One lady who is now my dearest friend, I barely knew her then, we would talk and pray together every day. And that actually was the most I'd ever experienced of God's graciousness.ever. It was through that, because I couldn't believe the people that came around me when I felt my worst. They just loved me and they would sacrifice everything. They would sit with me all night, just sit there and just be there for me. I just never knew the love of Christ extended so far."

The experience of a failed marriage and her recovery and experience of God's grace has filled her songs with a power that touches other people at a deeper level than ever. She observes, "I had this whole rock star thing! That was part of the whole thing, hoping that people would be ministered to through my fun time on stage! Now definitely, of course I love to sing my songs, but the greatest fulfilment and the greatest purpose behind it all is to help those who are hurting. To point them to Jesus and to give them hope to hold on to. And even as I do these concerts and I sing these songs, I have people talking to me all the time, particularly women, because women just connect on this deeper emotional level and I do a lot of women's events. They either can relate, have been there or just find encouragement that they can continue to hold on through the hard times when it's dark and they can't see the light."

These days Kim is happily married to Paul Dexter but back then things weren't so happy. "We were band members. Anybody who's ever been in a band kind of knows what that means! It's a definite love-hate scenario! Like business partners. So we were just friends, we were just making it through the band. I didn't even see him for another year or so after the band split up. Then eventually I moved out to California to further some musical things that I was working on. He was one of the few people that I knew there. And love began!"

They recorded her album in California with Paul taking on production duties. They now live in Costa Mesa which I point out is half a continent away from where they should be if they want to get signed in Nashville. But when it comes to the sunshine all year round, it's hard to persuade them that they have to move. However while they're over here they're enjoying the typical British weather! "My husband loves the rain," Kim says, "and I'm enjoying the rain to a degree. But we just tried to go out and get a bite to eat this morning from our hotel and I was just soaked! My jeans were just completely soaked and I was chilled just going down the street!"

Somehow no matter how popular she becomes in the UK, I have a feeling that for climate reasons, she'll never move here. "I know, we're spoiled," she confesses. But Nashville might be another matter. "Actually I have some of my best friends living there and I love to pop in and out of there when there's music things going on. But honestly, I don't like to pursue things like that. I've done a lot of it and I've had some things come from it. But usually it's just a lot of run-around. Like waiting and waiting and waiting. And I just didn't want to wait. I believed in this project. God had given me these songs. I just wanted to get out singing. Well bottom line is, God definitely brought me to where I am today, bit by bit. If he opened the door to Nashville I'd definitely go there but I don't think it's necessary. Yeah, unless God takes you there. If he has his plan then he'll do it the way he wants us to do it."