Kirk Franklin: The gospel star with a choir music album

Kirk Franklin and the family are the hottest thing in gospel choir music for years. Tony Cummings reports. 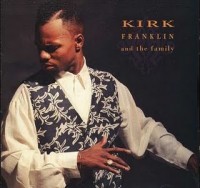 At age 23 and with just one album under his own name in the marketplace, Kirk Franklin is already a gospel star. His 'Kirk Franklin And The Family' on the hottest new gospel label for years - GospoCentric - has hit number one in America's gospel chart and Kirk has been nominated for Dove and Grammy Awards. Yet despite his relative youth Kirk is far from a gospel novice. He has written, performed or recorded with some of the biggest names in gospel including John P Kee, Daryl Coley, Rev Milton Biggham, the late Thomas Whitfield, the Williams Brothers and Yolanda Adams.

Born and raised in Fort Worth, Texas, Kirk began playing at the age of four. Kirk's childhood was far from easy. He was adopted by a distant aunt, Gertrude Franklin, when Kirk's teenage mother all but abandoned her son. His aunt raised Kirk in the church. She quickly recognised that Kirk was showing exceptional musical talent. By the age of seven he was being offered a contract with a white gospel record company - his aunt thought Kirk too young to enter the record business and turned them down flat! Times were hard and money was tight in the Franklin home. On Saturday mornings his aunt would be out scouring the Fort Worth streets looking for discarded drinks cans. With the money she earned for them she paid for Kirk's music lessons.

At the still ludicrously young age of 11 Kirk was appointed Minister Of Music at the Mount Rose Baptist church. It was there that the gospel protÃ©gÃ© began to write and arrange Christian music. "My first triumph," Kirk recalls, "was turning Elton John's 'Benny And The Jets' into a gospel tune!" At 19 Kirk made a home recording. "I gave the tape to Milton Biggham when he came to Fort Worth for a concert," recalled Kirk. The gospel star was so impressed that he asked the young composer whether he would write for the Dallas And Fort Worth Mass Choir's debut album. The Choir subsequently recorded a Franklin song "Every Day With Jesus". Later that year the tune was adopted for the Gospel Music Worship Of America Mass Choir and subsequently featured on GMWA's 'Live In Washington DC album. Franklin went on to write the title cut and direct the DFW Mass Choir on their second album 'Another Chance'. Opportunities began to pour in for Franklin. He directed the Trinity Temple Full Gospel Choir on their second album 'Holy One' (named after another of his tunes). Then came "Joy", a hit single with the Georgia Mass Choir. In 1992 Kirk appeared with the GMWA Men's Mass Choir whose album on Pepper Co included an electrifying duet with Hezekiah Walker. More recently Franklin penned the title cut on Myrna Summer's album 'Deliverance'.

After writing for everyone else Kirk decided to develop his own career. To that end he resigned his duties with the DFW Mass Choir. Considering his extensive work and success with mass choirs many were surprised that the new aggregation formed by Franklin, The Family, as a vehicle for his songs and arrangements should be a smaller, tightly knit group. It should be said that The Family are only small by mass choir standards however -they're still a 17-member aggregation of vocalists and musicians! The Fort Worth/Dallas based group were organised in April of 1992 and soon Franklin set about recording their debut, privately financed album. To everyone's amazement the 'Kirk Franklin And The Family' album was picked up by new national gospel company GospoCentric and within a month of its release in January 1993 the album was storming the Billboard gospel charts. The album was so hot in fact that many record stores had difficulty in keeping the album in stock. So just what is it that makes the Kirk Franklin style so special? Kirk calls it "Christian love music". He says, "It's music that convicts. A lot of the music that makes you 'bump' doesn't necessarily convict you. Sometimes music needs to let you know that you are not your own. I'm a young man and I have the desire to show the world that it's not about the bumping and rocking. But when you finish bumping and rocking you realise that there is forgiveness and salvation at the feet of Jesus."