KITE may not yet be a high flyer, but the wind seems set to change with his debut CD 'Mighty Flood'. Heather Bellamy reports. 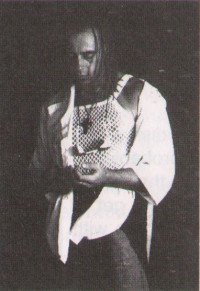 One of the best new R&B gospel singers to emerge for many a day is Surrey-based Kite who becomes the first artist on Scotland's successful independent Little Misty Music not to be called Ian White. Scotland's premier praise and worship leader has clearly demonstrated commendable A&R savvy in signing Mike Allen, otherwise known as Kite. For back in CR28, Greybeard Cummings was drooling about Mike's demo enthusing, "Mike's voice is a seriously soulful instrument," going on to declare he would recommend the tape to "A&R men wanting to hear a top vocal talent awaiting a record deal." As it turns out Mr Allen/Kite is no green-behind-the-ears newcomer.

In 1991 he was the lead vocalist on "Trippin' On Your Love" by A Way Of Life which went 54 in the Gallup Charts and was one of the top two dance tracks for the year. That led to a publishing deal with Warner Chappell and a follow up single "Witness Of Your Love".

This taste of the music fast lane was a big turn around for Kite. For during his youth he was a young man stacking up problems for himself. "My teenage years were spent, making music and searching for spiritual experiences. This meant an involvement in many new age activities, tarot, spiritual healers, pyramid power, meditation, Buddhism, Hinduism, yoga, etc. Also the drug culture, cannabis and LSD. None of these things ever satisfied - they just created more questions.

"I went through a very bad period of health suffering with eczema which led me to lose faith in the self-empowerment techniques of other religions. At that point God saw that my heart was ready to receive the seed of eternal life and led two Christians across my path, the second of whom brought me to a small fellowship where I met Jesus and was cut free from my past and filled with the Holy Spirit. This was in December 1989. I went straight into spiritual warfare having had friends involved in the occult. There was a battle going on. It was an amazing time."

In October of 1995, Kite joined forces with Ian White who had a "burden to help people." After signing, Kite got to it redoing the original 'Mighty Flood' 6-song demo and adding some more Jesus centred songs in a better studio. The result is a stunningly soulful worship experience.

When asked to comment on his new finished album Kite's response is somewhat unpredictable. "I haven't got a CD player, let me know what it's like!" For me, I truly believe that through this album God's Spirit will rain down living water into the deepest parts of people's souls. For powerfully anointed it definitely is.

For more on Kite visit the Kite artist profile