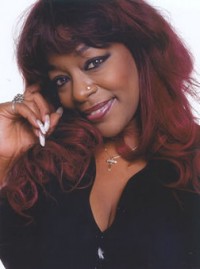 When one particular singer steps onto the stage at the Oraclez Gospel Festival & Awards Ceremony at Wembley Arena on the 31st May it will be an announcement to the whole gospel music scene that a new Kym Mazelle has arrived. For two decades this hugely talented diva from Gary, Indiana has lit up the British dance and R&B world with a string of club music hits; earned a gold disc for her version of "Young Hearts Run Free" in the 1996 Baz Luhrmann film William Shakespeare's Romeo + Juliet; and sung with a vast array of mainstream hitmakers including Mick Jagger, Chaka Khan and Soul II Soul. But since 2003 Kym has been a Christian and this is reflected in her new mini-album 'Destiny'. This searching excursion into R&B gospel contains "Here Comes The Light" which is already picking up Cross Rhythms airplay.

So how did the change in Kym come about? "Well, I finally heard a still, small voice," the singer explained to Cross Rhythms' Jon Bellamy. "I heard God just say, 'Come out from amongst them and be separate'. It was so small I thought 'Did I just hear that?' It was in the middle of noise. I was working hard touring, doing the headlining shows and still recording. I was in the club world and going to the raves, the late night parties, the sex, drugs and the rock n roll. I was just exhausted, I wasn't happy, you know it was just dark really."

Kym was born Kimberley Grigsby in 1960 in the steel mining city of Gary, Indiana. She lived a stone's throw from the Jacksons and knew the family well. The future Motown stars would often visit Kym's house to sing songs that she had written. Kym later moved to nearby Chicago where she became a regular fixture on the city's house music scene. She worked with pioneering record producer Marshall Jefferson and in 1987 released her debut single "Taste My Love" on Police Records. The following year Mazelle had a hit on the US club charts with "Useless (I Don't Need To Know You)" but the success was not repeated this side of the Atlantic where the song only reached number 53 on the UK singles chart.

Success in the UK came in 1989 courtesy of a duet with Dr Robert of British new-wave group the Blow Monkeys. Their single "Wait" stormed to number seven in the charts. Her next major hit was another duet, this time with dance/R&B group Soul II Soul. "Missing You" reached number 22 in the UK in 1990. Kym is possibly best known though for her cover of Candi Staton's 1976 hit "Young Hearts Run Free" which appeared on the soundtrack to Baz Luhrmann's 1996 film Romeo + Juliet and made the top 20 on the UK charts. 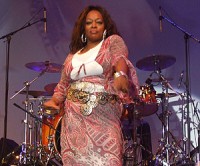 Kym soon relocated to the UK and married an English citizen. "Unfortunately he wasn't faithful and that came to light," said Kym. "It just really hurt me. I was worn out but the light began to start shining in my spiritual life." After her conversion in 2003 Kym left her house in London and moved into the suburbs. She continued, "Because I don't know how to drive I was put in this situation where I had either to walk or catch the train. God was really with me during these walks and it was almost like a mandate that he had on me; 'don't call up these chauffeurs that you used to use to drive you around. I want you to just depend on me and I'll teach you.'

"During a lot of these walks I would run into people and they would speak to me about Christ or something that had happened to them. After a while I began to share the Gospel with people that I met on the road or along the highways and byways. God began to teach me his word through the Holy Spirit and that aloneness with him. I was a babe in the church and the Holy Spirit helped me through. I'd encourage anybody who may be recently born again and be a babe in the word and who is maybe having a difficult time, don't give up, the Holy Spirit will minister to you."

What have been Kym's biggest challenges since becoming a Christian? "Loneliness or aloneness I guess. I've got to a point now where I say, 'Lord, is it okay that I can have my luxuries back?' because before I had really over-the-top, too much. But he's like, 'I'm not taking that away from you but I want you, not to have that BE YOU. It's not you, you are Kym, you are my child, you are the same whether you are here or there.' There are people who are up and out and there are people who are down and out and we must be able to minister to them all so you can't just go and sit in the high tower and not talk to people. I love the way that the Lord has delivered me from all that. It has just been awesome, God has been working with me and blessing me. I'm in love with Christ, I love his word. I love the people of God. I'm just very, very happy right now. Very Joyful!"

Have people in the music industry noticed the change in Kym and how do they handle it? "Most people seem pleased and I see other people trying to make a change in their lives too although some people want me to go somewhere I can't go. The days that we're in right now you really need to stand for something or you'll fall for anything. I believe that the truth of the word of God and of Jesus Christ is the truth that was put here for everyone to know and that he did die on the Cross and rise on the third day for our sins so that we would be able to walk in the light. My biggest prayer is that everyone gets touched by God and that they come to the knowledge of him. His love is just so beautiful and so sweet that everyone needs to taste it. Taste and see that the Lord is good!"

Being best known for R&B, dance and pop, what has Ms Mazelle got in store for the church-going community attending the Oraclez Gospel Festival? "I'm getting into gospel stuff like Walter Hawkins kind of music right now and there's an old traditional gospel song called 'Even Me' that I'll be singing. I'm actually doing some of the dance music that I have recorded in the past with other people like 'No More Tears' that I worked on with Robert Owens. I'll be introducing the set with one of the songs I did with Soul II Soul just so they remember who I am!"

What can we expect from Kym's new mini-album 'Destiny'? "I'm really excited about the way God has put that together," enthused the diva. "It has new songs on there and also some from before I was born again or saved, whatever you want to call it. I believe I was always saved but just didn't know it! Some songs have been in my back catalogue and the Lord has just kind of blessed me to put them on the album - there's some Scripture that goes with just about each song. It's not your conventional gospel album, it's inspirational and is a testimony. It's more than just gospel. I just hope that people love it. The single 'Here Comes The Light' is a wonderful record produced by Alan Glass who has worked with Whitney Houston and Aretha Franklin. It's an honour just how faithful God is and just how faithful he is in my life. I'm learning how to do things his way instead of my way which has got me in a load of trouble!"