Rap collective L.A. SYMPHONY have undergone a whole heap of record company traumas but have survived to tell the tale. They told it to Mike Rimmer. 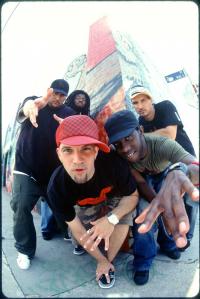 It's April 2000 and I am meeting L.A. Symphony for the very first time. I'd already been playing their debut album 'Composition #1' on my Independents' Day programme on Cross Rhythms and now the band were signed to the Squint record label. Nothing I had heard prepared me for the chaos of actually meeting the crew as they filed into my hotel room. 10 rappers and DJs, three record company personnel and a two-man film crew wandered into my average sized room and sprawled across two beds and around the walls, filling it completely. I chatted to L.A. Symphony for the first time as they wise cracked and joked their way through the interview. It was chaotic, there was only about three minutes I could use on the radio and they had this thing where they break out into a cry of "OOOOWEEEEEH!" at the drop of a hat. I'd never forget meeting them.

Two years later in the foyer of the same Nashville hotel, I run into Joey The Jerk and Sharlok Poems from the group as they are standing around. In the two years that have passed since I interviewed them, their record label had hit financial problems and the album they recorded for the label got filed away on a shelf never to be released. The pair were obviously hurting since they were contractually tied to a label that no longer existed but more of that later. In the end I did my best to encourage them as we bowed our heads and in the middle of a busy foyer, I prayed for them.

Now it's 2004 and what a difference a couple of years make. A slightly slimmer, slightly saner and definitely more worldly wise L.A. Symphony gather in my hotel room for a chat. This time around I'm talking to Joey The Jerk, Flynn, Sharlok Poems, Uno Mas and Cookbook. Other members of the group, frustrated with the impasse with Squint, have left and gone solo though stay friends with the other group members.

The Squint debacle occurred when the Steve Taylor founded label hit financial difficulties and financial owners Gaylord decided they didn't want to bankroll the label anymore. In the end Taylor couldn't find the financial backing he needed, the label crumbled and all its assets passed to Word, then owned by Gaylord as well. Joey The Jerk comments, "So the album 'Call It What You Want' ended up not coming out and in that process, we decided that Word wasn't the best place for L.A. Symphony. So we went through three and a half years of trying to get out of the contract. And here we are!"

While 'Call It What You Want' collects dust on a shelf somewhere in Word's vaults, the group have moved on and signed to Gotee and released a new project, 'The End Is Now' and if it's a success no doubt their unreleased album will be swiftly dusted down and released. Although the company have been ever so generous to the boys. Flynn says, "Yeah. We can actually purchase it for $343,000! But I'm kinda short of a few bucks!"

Ultimately though they have their sights set on the future now. A new album and wounds that have been licked and have begun to heal. Cookbook shares, "I don't even listen to the 'Call It What You Want' record myself because it's like putting on old clothes or wearing really old shoes that just don't fit you anymore. That's not who we are anymore."

After the label shut down, it wasn't long before the group didn't have a manager, a booking agent or anything. They came to a dead halt. It was time to rebuild and look forwards. Flynn remembers, "We found out the hard way no one cares about your career and your music as much as you personally do. Not management, not booking agents, nobody. Sometimes you have to learn that the hard way. We had to do everything ourselves again. Emotionally of course, and financially, it was very, very hard. We just did an EP called 'Baloney'. The great thing about the whole thing that we went through was, we had this buzz and we basically toured for two years off the buzz alone. We had no record, no nothing but we were still able to go out and do all these different shows. Even though it was hard, we were still able to function as a group. We would play mainstage at festivals with no record!"

Emotionally though the group were hurting. Joey asserts, "I think emotionally, of course it was hard. We had many days frustrated or angry or 'Why is this happening?' or whatever, but I think that's kind of the whole reason why the album is called 'The End Is Now' because we took a stand and said, 'Enough is enough! We need to take our own attitudes and our situation into our own hands.' And as soon as we got that revelation, we got out of that deal and things started happening."

Cookbook jumps in and explains how the group got released from their legal obligations to Squint. "When we decided to do 'The End Is Now' we actually got in our van and drove to the Music Word group offices and said, 'We're not leaving until we get this here taken off.' Uno Mas laughs as he remembers, "I thought to myself that it would only cost $200 to fly to Nashville and I'd find whoever I need to find and I thought I'd just stand outside of the Word offices and shake 'em real hard! I figured that I'm a big black guy and hopefully I could scare us out of the deal! I think it worked though. We all showed up! Basically we had our lawyer call them and they started to get the paperwork together. It took two days and we stayed there two days, signed the stuff and then we left."

So they managed to sort out the legal stuff but a more important question remains. Has God sorted their hearts out? Sharlok Poems responds honestly, "I think we're still a little cynical every once in a while! But I think putting out this album 'The End Is Now' is kind of like a finality to that whole thing. Just letting out those emotions and letting them be there. I think we've definitely moved on and our content now is more optimistic and definitely just trying to get back to where we used to be, and enjoy the music and be all about the music; just enjoy our lives as Christians and musicians and artists."

Flynn adds his perspective, "I also think though that God prunes us. I definitely think that although we didn't want those things to happen to us, we definitely have grown so much as people, we've grown closer as a unit. God has pruned us. A lot of things that maybe were way different and maybe even out of order back then, are so much more in order now. I think that our focus and our vision is much clearer now . So I think it's all a process. I can honestly say that I can look back and say that if there's any redeeming, it's that we've definitely grown and there's definitely purpose in it. We don't like to admit that, we don't like to say 'Purpose in God!' because we're like, 'That sucked!' We didn't like going through that BUT I think definitely there was a lot of pruning, a lot of good things that God has done out of that."

One criticism that is often levelled at outfits like L.A. Symphony, Mars Ill and GRITS is that lyrically they aren't direct enough, preferring to explore wider issues than just spiritual ones. Cookbook explains, "I think as a group, we take the approach of just having a freedom in Christ, being free in your relationship with Christ. And as well, we try to just do what we feel. It's everyday music, you know what I mean? Most of the songs that you hear on our records is something that has happened really, or something from our own individual experiences. Instead of talking AT people, we try to talk TO them and build up a relationship through the music as well as through the shows. Our vision is very outward focussed, we want to penetrate the mainstream and get into that realm where we can influence people and be a good example to those people. Because there is nothing there! And we've never apologised for that, it's just always been our heart. We've always approached music that way."

A rare promotional set of "Call it what you want", containing a cd and dvd, produced in 2001 by Squint, has recently surfaced and is now for sale on Amazon.
http://www.amazon.com/gp/product/B007GHGKSQ