Lauren Daigle: Rising to the challenge of making a follow-up to a smash hit 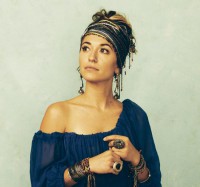 In the long history of contemporary Christian music, there have been few more extraordinary rises to fame than that of Lauren Daigle, from Lafayette, Louisiana. Her full-length debut album 'How Can It Be' produced a record number of Christian radio hits and was recently certified Platinum (a million units sales).

Along the way, she gathered three Billboard Music Awards, notched up an American Music Awards nomination, earned Gold certifications for three singles, and three K-LOVE Fan Awards. Additionally, she sold out headline tours, contributed an original composition to the critically acclaimed Blade Runner: 2049 soundtrack and seemed to be continually on the road. At the end of all this frantic activity she admitted she felt "burnt out."

Lauren said, "I left too many of the places I came from in order to keep the machine going. I had to return to the beginning. I took most of 2017 off and went back to Louisiana. I was reminded why I love what I do. I got outside of the expectations and the pressure. I found the inner depth to say, 'This is who I am. These are the truths I can hold onto and anchor myself to,' and songs poured out of that place. I decided to go back to the basics."

The sights and sounds of her birthplace stoked this energy. Cherishing memories of attending Lafayette's Festival International every year throughout her childhood, she opened up to the gritty, organic and handmade sounds associated with Louisiana's legendary blues, R&B and Cajun scene. Entering the studio with frequent collaborators and Nashville CCM hitmakers Jason Ingram and Paul Mabury behind the recording desk, she commenced work on what would become her second full-length album, 'Look Up Child' which is now released and already soaring up the American charts.

Read a press release, "Stressing organic instrumentation, she incorporated live musicians and a string section to preserve the integrity of the sound. At the same time, she pushed her limits as a singer, inciting pure catharsis in bluesy vocal runs, shuddering soul and raw lyricism. Everything would be real - nothing synthetic or manufactured. The sonics came to life in their purest form as did the lyrics."

Lauren spoke about the challenging recording process in making 'Look Up Child'. She said, "I long for that energy I get when I'm home. Jason, Paul and I stayed true to that. It meant I had to put blood, sweat and tears into everything. You pay the price spiritually, emotionally and physically - so everyone else can gain something. I wanted to be as exposed and honest as possible. When someone else is walking through one of their most vulnerable spaces, I can give them something to hold onto."

The first single "You Say" from the album underwent serious road testing and has already emerged as a fan favourite. Wrote one reviewer, "Its sweeping orchestration resounds in tandem with her expansive delivery. Meanwhile, that voice reaches jaw-dropping heights backed by a choir."

Lauren spoke about the genesis of "You Say": "I went into the studio with all of these insecurities and realised for the first time in my career that things are changing - whether I like it or not. The old is out. The new is in. It was a shock, because I didn't think everything would happen so soon. I wrote 'You Say' first and out of that state. We started playing it every night and the crowd would sing along even though it hadn't been released. Because of that, it just had to be the first single."

The song "Look Up Child" encourages youthful whimsy and draws on the innocence and purity of childhood. In some ways it was inspired by Lauren carrying a Mr Potato Head doll at the urging of a friend in order to "lighten the mood anywhere." "When friends get stuck in a rut where there's no more passion and life is just work and pain, I show them my Mr Potato Head," she smiles. "It's a reminder to look up, have that childhood faith, youthful feel and not lose the passion. That's the essence of the whole record. When you're a child, you believe anything is possible. I want that."

Lauren had gone into the studio to record 'Look Up Child' with a bold ambition. She said, "Going into the record I told the guys, 'I want to sweat at the end of a show when I play the songs'. That means, I want to dance and move with the audience. I want fans to leave with a sense of hope, joy and freedom they haven't known. By re-identifying that joy in my own life, the sound is deeper than I ever imagined it could be. It's about remembering what it's like to be a child again and to look up and see the clouds, the sunset and the stars. It's about having hope once more. You can always come back to yourself. You can come back to the things you thought were lost. You can always come back to redemption."