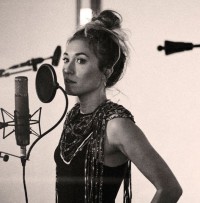 Louisiana-born singer Lauren Daigle, who is now acknowledged as "the fastest-selling new artist in the last decade in the Christian music genre," has announced a tie-up with Bumble, the social and dating application. The women-first social networking app promises women that "#AskingForAFriend doesn't have to be scary and that making a new friend can be an exciting adventure." In a special competition one Bumble user and their BFF contact will go on "an unforgettable adventure in New York" where they will meet with Lauren Daigle, whose most recent single, the Cross Rhythms radio hit "Rescue", inspired the contest.

Said Daigle, "At its core, music is about connecting with others - whether sharing a favourite song or hanging at a concert (with a couple thousand friends). Bumble BFF is similar in a way, in that people can find comfort and connect to others through conversation."

Lauren Daigle is a two-time Grammy-winning artist, five-time Billboard Music Award winner and a two-time American Music Award winner. Daigle's Grammy Award winning double-Platinum single, "You Say," has topped the Billboard Adult Contemporary charts and appeared in the Top 40 of Billboard's Hot 100 chart. Her Grammy Award-winning album 'Look Up Child' debuted at number three on the Billboard 200 Albums chart and has been certified Gold. Her debut album, 'How Can It Be', has been certified Platinum by the RIAA and has produced three certified Gold singles.

Said Chelsea Maclin, VP of Marketing at Bumble, "At Bumble, we truly believe that one connection can change the course of your life. Bumble BFF is a platform that has helped many people find incredibly strong communities and support systems. We want to normalize the need to make new friendships throughout every phase in life. We're excited to partner with Lauren and to collaborate on gifting this unique experience to one of our lucky users."

I was in a abusive marriage for 17 years and don't date. Sad I can win to meet Lauren.