Lavine Hudson: A straight ahead gospel singer trying to make sense of the pop/R&B world 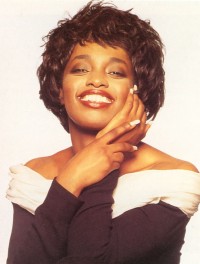 If you were to count on your ringers the number of British black gospel artists that had been given a long-term contract and reasonable promotion by a major record company, you could safely afford to leave one hand in your pocket Singers like Mica Paris and Paul Johnson have crossed over, it's true, but singers who have remained with gospel and who have the backing of a mainstream label are few and far between. In fact, for counting purposes, one finger would suffice.

No wonder, then, that Lavine Hudson was feeling a little nervous when I met her at her publicist's office a week before the release of her all-important second album on Virgin Records. Her first album, 'Intervention', earned the proverbial critical plaudits, but the appreciation of the record-buying public was slightly less forthcoming. The tide track just missed the Top 40 as a single but album sales were disappointing on both sides of the Atlantic. Not only that, but by taking a strongly contemporary direction Lavine found that she had alienated a number of the more traditional among the gospel fraternity. There were rumours of acrimonious disputes over management contracts and some felt that the lady now believed herself to be too high-and-mighty to appear on the same bill as gospel artists from the community that had nurtured her. Gospel can be unforgiving to those who transgress its unwritten codes of conduct

Her roots couldn't be more traditional for a British gospel artist. The daughter of a minister in The Church Of God in Christ she was raised in South London and singing in public at an early age.

"We didn't sing in a choir at first because there weren't that many kids in our church, but because there were six of us in the family my Dad formed a little Hudsons group, ever since we could talk. He'd teach us songs on a Saturday night and we'd stand in church and sing them on Sunday."

Choir experience came when she was a little older - all the young people in C.O.G.I.C. churches join the choir when they reach a certain age, whether they can sing or not, and Lavine was no exception. Her first taste of performing outside church came with a gospel group called The Harmonisers, when she was 14. The Harmonisers had pioneered gospel in Britain since the 1960's and by the late 1970's they were taking their soulful gospel sound onto the college circuit and wanted to make use of the young Hudson's fire. Other important lessons came during a stint in The London Community Gospel Choir, although surprisingly Lavine doesn't remember the learning to have been of a musical kind.

"LCGC being more of a community choir we mixed with other people -there were Seventh Day Adventists and people from all kinds of backgrounds, not just C.O.G.I.C, so it was a learning experience. I didn't really learn anything as a singer, but it taught me a lot about people."
The turning point came when she won a scholarship to the prestigious Berkeley School of Music in Boston, Massachusetts.

Td reached a stage where I had to choose a career at school and I wasn't happy. I'd taken all these sciences because my parents wanted me to be a pharmacist, but l wanted to be a singer. Everyone was putting me off, saying 'it's too tough, you'll never make it,' but deep down in the bottom of my heart I knew that was what I wanted to do - and I wanted to give it shot while I was really young so that if it didn't work I could still step back out and get into a career. I thought if I'm going to be a singer I want to do it properly, I need some training. My cousins lived in Boston and they told me about the college, so when I went on holiday I decided to check it out I went down to the school and talked to some people and they asked me to come in for an audition. During the holiday they sent me an acceptance form.

"It helped me that I was British and they had to fill a certain quota of European students, but also I think they didn't believe my voice, because when I sang they thought I was American -- they were intrigued by that They gave me a 50 percent scholarship and the church that I located to in America also helped me considerably. I also did singing on the street -- street busking - with my little acoustic guitar, to help me pay my fees. I made a lot of money at it too!"

Whatever disorientation the young Londoner may have felt, suddenly finding herself resident on America's East coast, she was determined to make the most of all that her new host country had to offer.

"It was a serious culture shock, but what I liked was that there were loads of opportunities for me to go out and get experience.

There were church concerts every week, on every street comer there's a church, so it built my voice and it built my name in Boston. The training was brilliant - I took arranging and composition because I really wanted to extend my songwriting, but I majored in vocals. I'd had vocal training in England, I'd had classical training -that's why I wanted to go to Berkeley; I wanted to change, I was getting too controlled and I was losing the heart. I went to America and they just made me sing and wherever I went wrong they corrected me, they didn't try to give me a direction, they felt that I could get that myself."

Meanwhile, news of the precocious young English singer was travelling rapidly among the gospel fraternity - before long Lavine found that she had met many of the artists who had been her childhood inspiration.

"In America they have these big gospel convocations where you get up to a million people and a lot of the major artists go down there. What's good is that they mix the major artists with the new, so I got to sing on big programmes with my idols! I met the Winans, the Clarke Sisters, most of the major gospel artists at these events. We socialised and built up from there - it was a bit of a gimmick at first because I was British and they couldn't believe that someone from Britain could come over and play them at their own game."

Not everything about America appealed to the young singer, however. Above all, she wanted to avoid being pigeonholed by a record company - either into being groomed as "the new Whitney" or being straightjacketed into a traditional gospel mould. In the U.S., with its rigidly segregated charts, the chance of being a crossover artist seemed remote. Back in England, it was Virgin Records who were prepared to take the long-term view, and offer her the artistic freedom she craved.

In the 80's I worked for Marshall Arts and did a small tour with Lavine, round Europe supporting Joe Cocker, ending up at the Hammersmith Odeon(as it was then) opening for Davd Peaston, a great little tour.

Where can I get contact info to convey my sympathy to her family..so saddened by her loss.

Its a shame that Lavine didnt achieve the popularity and recognition here that she had in GB. in the late 80s- early 90s I was looking for more & diversifying my tastes into Christian music when I saw Between Two Worlds on a Christian Video channel and was immediately taken in not only by her vocals but her charm and beauty. At that time I never did find her CD or video and kinda gave up. Have since recently found her on YouTube but SO SAD learning of her death. WOW what beauty & talent, what an Entrepeneur she was seeing her niche, what a loss for us and a gain for Heaven! It will NEVER be the same up There! RIP Levine!

lavine i loved her, her music was lovely. she has gone home to be with the lord, bless her lord and keep her safe, amen

We miss you so much angel Lavine, I know you are in the arms of your father, sleep im peace

I'm sorry say Levine Hudson died on Wednesday 4th April 2017. I was searching for more information and came across this website so I'd thought I would let you know.

We have lost a beautiful talented gospel singer. Lavine RIP

Where ever you are Ms Lauvine, May God's perfect will fill ur Life.It may seem selfish of those who love ur gift to want to see and hear from you again. You touched my Life through ur music.Thank God for Amazon, because, I recently purchased Intervention and Between two Worlds.I wore my cassette,S out.That's all we had in the states.

When I noticed Lavine Hudson's 1988 "Intervention" album cover which came in with the new music for listening and possible programming I was blown away with her unique sound and the song's message. I couldn't wait to play it first on my show.

We got a great response to Lavine Hudson's "Intervention"

May God smile and keep her dearly.