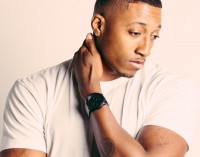 Released by Columbia/Reach Records on 22nd September 'All Things Work Together' by rapper Lecrae has leapt into the iTunes chart at number four and is already receiving rave reviews from critics and fans alike. Wrote Chris Lacy for the Albumism website, "By turns gritty, intense and transcendent, 'All Things Work Together' captures the social, political and religious undertones of today's America. It encompasses all the peaks and valleys the Reach Records mogul experienced in 2016 and forces the listener to confront unsettling realities we're exposed to every day. Complementary to what came before while pressing forward artistically, 'All Things Work Together' is unquestionably Lecrae's sharpest and most sophisticated effort to date."

Lecrae himself spoke to Lacy about his album. "You're hearing my life in 2016, play-by-play, and I went into some dark places. I went into some very revealing things. Things that people will probably be shocked to hear me say that I experienced, but I became a better person through it, so I had to talk about it. That's the whole idea of the album, 'All Things Work Together', is that the dark times work together for me to become the person that I am today. You need all those elements to create something good. People's jaws will drop when they hear it."

Guests on the 14-track album include Ty Dolla Sign, Tori Kelly, Verse Simmonds and Kierra Sheard with production from Metro Boomin, Boi-1da and Mike WiLL Made-It's EarDrummers. Lecrae told Nerisha Penrose of trade magazine Billboard about his new approach to his art, "Before, I kind of sugarcoated stuff, but I don't care anymore. I'm going to be me fully, and if [my fans] really love me, they gotta ride with me - this is who I really am."

The title 'All Things Work Together' is a clear reference to Romans 8:28. Said the rapper, "It was personal, but then I was like, 'How do I make it general, too?' Because everybody may not know that Scripture or understand the deeper meaning. I think everyone can relate to all things working together because it's like going to military training and you come out on the other side better, stronger. For me, it's the idea that God has a purpose and a bigger plan for everything that I'm going through so I just gotta get to the end of this and hopefully it'll reveal itself."

Work on the album actually began in 2015. He said, "I went to Los Angeles and started working and then I linked up with my good friend Natalie Lauren, and Natalie really owned the creative process and helped me find the best music possible, and it took two years to really make it happen."

For Lecrae matters of faith are complex issues. He said, "I think complexity is beautiful. I think we want everything to be black and white, but we miss out on the whole rainbow and the beauty of that when you try to limit it. . . There's some stuff I may not condone, but I don't condemn and I just try to see the beauty in it and what God intended in things, instead of condemning everything. I feel like that's what a lot of Christians do, they criticize. They condemn instead of creating, and I just wanted to change that narrative and show people that. . . plus, there's a lot of Christians who say, 'Oh, that's me too, I was scared to say it,' but at the end of the day, just be you and I'm gonna be me. . . I've quit caring and quit worrying [about what some people will think]. I'm like an old man who got dentures - my teeth gone, I don't care, I'm taking them out and putting them on the table next to me, 'What's up?' I'm just very comfortable in my own skin and I know that there are people just like me."

The rapper spoke about Kierra Sheard's stunning vocal on the song "Worth It". "I wanted someone who had an amazing voice but who can also capture the sentiment of the struggle of, you know, 'God, do you still love me? I've fallen so short,' and could tackle it authentically. I knew she could, because that's a friend of mine who is a young Christian, who asks the same questions as I ask, and wrestles with the same stuff that I wrestle with. She could relate, and captured the feeling perfectly and knocked it all the way out the park."

One of the heavier songs on the album is "Cry For You". Admitted Lecrae, "'Cry For You' was not supposed to be a song for the album, it was supposed to be a journal entry. I wrote it and Taylor Hill, who sings on the song, sent over just the vocals. I was reading this kind of journal entry rhyme form over it, and Natalie was like, 'Keep that, that's the song.' That was the first take, we didn't re-do it. All the pain - I was nearly crying. Some songs were meant to be written but not shared, but that one I wanted to share with the world."

For more on Lecrae visit the Lecrae artist profile