Tony Cummings met up with the Preston-born songsmith LIAM BLAKE

Liam Blake is a singer/songwriter happy to play anywhere and everywhere. In the last year he's played Glastonbury and Greenbelt. He's also conducted a living room tour playing in people's homes. That, coupled with a fine debut album - 'You And Other Stories', named by Cross Rhythms as one of the 20 Best Albums Of The Year - means that Liam's reputation is growing and growing. Phil Jupitus spoke about Liam's "achingly lovely voice" while his bitter-sweet songs described as "the landscape of the troubadour - heartbreaking, idealistic, lush - a journey through life for everyman" means that his pop folk songs are truly memorable. Preston-born Liam came to the Cross Rhythms studio to sing some of his music and talk about his life and music. Unlike the stereotypes of the singer/songwriter with a tortured past Liam had a happy childhood. He said, "I was very blessed, I have very joyful, loving parents and the whole network of family and friends around me was very similar in that respect. Spirituality has always been central to my family and to my friends. There's never really been a specific spiritual agenda but definitely an awareness of how blessed we all are to be living this wonderful thing called life. That was always a state of mind that was present throughout my childhood."

Liam always loved singing. He remembered, "We used to spend weekends at my Nana's house over in Southport and she had a lovely old upright piano. I'd spend most of the weekend in the piano room learning stuff by ear and driving everyone crazy. Not that they'd show it; they were always very encouraging. Music was always around and if it was something that I expressed an interest in then it was definitely encouraged in me."

At college, where he was studying RE, English Literature and German, Liam began to play guitar. "That was about the time the Beatles 'Anthology' was released and I mean obviously I knew the Beatles' music but that was my first insight into who they were. I suddenly became more aware of the scale of what they were and just completely fell in love with the whole thing. I rushed out, got a really cheap guitar and didn't put the thing down till I could knock out a few Beatles' tunes."

At university Liam studied law for a year before switching to a music and performing arts degree. He said, "All the way through school I had this notion that I was going to be a barrister. The whole nature of the law, the ethical aspects of law really appealed to me. So I remember I selected my options at school to afford me a path to certain A levels. It was all very calculated and I got there and after a year thought my word, this is not the world for me at all. This is not what I thought it was going to be. Maybe I'm not who I thought I was going to be. That was the first year at the University of Central Lancashire. I still found it very interesting but I think even at that time I'd invested more time and energy into my music. I was writing a lot of material and playing little gigs here and there by that time. And I just realised, you know, actually, this could be a job - instead of being a barrister." 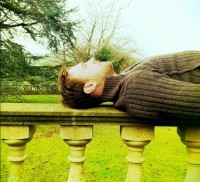 It was Open Mic nights at folk clubs that built up Liam's performing confidence and saddled him with the "folk" label that still sticks to his music. He said rather ruefully, "Obviously, if you put an acoustic guitar in someone's hands and they sing a plaintiff kind of material with this imagery of finger-picking, someone's going to label it folk. It's going to happen, I think. But it's more about the spirit of the way in which these new musical communities became, how the music kind of grew out of these communities. I think it hails back to the '50s and '60s folk club tradition perhaps. I would love one day to record an album of traditional folk songs, once I think I'm a mature enough artist to give a reading to this material that's fresh and interesting. At the moment I'm too busy blathering on about what I've experienced myself. Songwriters tend to. One day I'd like to tackle some other great songs."

In 2001 Liam and a couple of friends formed a band called French Eric. Said Liam, "We went together for four years and had a great time, made lots of records at home and did lots of gigs. We used to get compared to people like XTC, and sometimes Squeeze. Broadly speaking it was indie pop with a kind of Young Ones mentality thrown in. But I think professionally we had this serious attitude but it wasn't until we all went our separate ways and I suddenly realised, you know, I don't have to be John Lennon, I don't have to be other heroes of mine - Van Morrison. It's actually better if I try and be who I am and learn who that person is and write accordingly. So I think with regards to material I started taking things more seriously."

Liam admitted it was strange how the break up of French Eric came about. He recalled, "I was writing a book of material and the guys kind of wanted - the more I wrote, the more introspective my songs became and the more like a solo singer/songwriter my material seemed to be. I think the boys just wanted to go off and carry on this band kind of ethic which was great. It took me a while to adjust but once I got my head round it I just made a little EP, 'Northern Lights', and just started again really, playing anywhere. I played a lot of little cafes and wine-bars and living room gigs."

After moving to Bath Liam did a Master's degree in songwriting. Around this time the singer/songwriter came to the attention of Helium Records, an independent label based in the South West headed by famed producer Chris Hughes, who has worked with such luminaries as Paul McCartney, Tears For Fears and Peter Gabriel. Said Liam, "It was a great time for me. I was in the middle of this MA, really enjoying it, and met Chris via another house party. I was playing in someone's living room to about eight people, which was great. Chris and I met and we got together a few weeks later in the studio and he inspected some of my stuff and decided that it might be nice to put out a record which became 'You And Other Stories'. We had a lot of songs to wade through and it took a while to assemble a collection of songs that presented the length and breadth of where I was at the time at least. It was decided that perhaps having written so many songs it would be good if I did an album of material that spanned the last 10 years. So that was a bit of a process. But once we'd decided on the material we were going to record it was fairly straightforward and really enjoyable."

Liam's favourite track on the album is "Heart And Soul", with its memorable lines "Why the lowly one considers life to be a holy one/How he makes his goal to look beyond the daily rigmarole/And he tries to live with his heart and soul." Observed Liam, "Of all the stuff on 'You And Other Stories' 'Heart And Soul' seems the most anonymous song, less about me and more about something that might be relevant to more people. I think as a songwriter that's what I'm trying to achieve. To touch as many people as possible. So that's the one that's speaking to me at the moment."

Another gem of a song which made the Cross Rhythms playlist was "Rush". Said the songsmith, "It was written pretty quickly as a reaction to one of my many failings as a human being. I think once you listen to the lyric it's pretty obvious. It's about losing that sense of your higher self in a situation where somebody else that you care about seems not to be getting where you're coming from and you think you're the most important person in the world at that point. And you think your point is the only point. And then going back from that situation and looking back and realising that you were a bit of an idiot perhaps."

But possibly the greatest of a wonderful batch of songs is the voice-and-guitar closer "Sinners And Saints". With its haunting melody Liam confesses that he's "no holy man" admitting that "I can't quote the good book/I don't know the verses I just know the hook."

Liam is already writing songs for his next album. Whenever that is released one can be sure that it contains songs that vividly reflect the human condition and the multi-textured nuances of relationships and life. And his songs will continue to reflect glimpses of the transcendent. "I believe that by stepping back and internalising my faith, I'm becoming more a Christian than I ever was. This is the thing. But my agenda isn't to go out and promulgate a mindset. Before I perform, before I write a song I ask God always humbly allow me to glorify you in whatever way that may be. So a lot of the stuff that I write is not evangelical in a fundamental sense, it's reactionary and it's a digestion of an experience a lot of the time and it's my articulation of processing what happened and what I learnt from it. That's what I'm trying to do as a songwriter, definitely. Not write vacuous, empty stuff but always something of and about life and God's gift in the broadest sense. If that's seeing joy in a banana split then I'll write a song about that."