Lighten Up: Bringing communities together with bhangra worship!

Tony Cummings reports on the Midlands-based LIGHTEN UP project

It's taken quite a while, but slowly but surely some of the colourful musical sounds of India are beginning to be heard in Christian music. Back in 1993 there was a bit of a false dawn when Martin Smith (in pre-Delirious? days) produced the groundbreaking album 'Asia Worships: Mukti Dil-Aye' which wedded Asian and Western rhythms often with sublime effect. More recently Birmingham-based pop rock band Mowglee, consisting of four Asian Christians, included the song "Ru Ahh" on their 'Revolutionized' album. But it's taken until last year for the British Church to get its first taste of full on bhangra worship. The groundbreaking track "Heliluia Sada Gaenge" appears on the album 'He Reigns' by a collective known as Lighten Up. As it turns out the driving force behind the Lighten Up project is none other than Mowglee's singer/composer Marcus Masih.

During a Rimmerama programme on Cross Rhythms, Mike Rimmer interviewed Marcus and another member of the Lighten Up collective, Sonia Masih (Marcus' niece). Mike began by asking about Mowglee. Said Marcus, "We're still going. We're working on a new album. We did tours of the States and France in 2007 and we've been gigging but not recording much. But we have finished recording our new album." 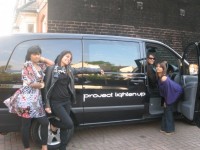 While Mowglee has taken a bit of a back seat in recent times, Marcus has put time and energy into Lighten Up. Their website gave a thumbnail description of what that initiative is all about. "The Lighten Up project is made up of volunteers representing diverse backgrounds, age groups and experiences. Many are British Asians, and there are also Afro Caribbeans, Greek, English and Americans! We aim to reach out to those seeking a deeper relationship with Jesus Christ, possibly knowing him for the first time, or to experience him afresh in their lives. We do this through music, drama, dance, teaching and evangelism, supporting the local church by providing monthly events and weekly activities for people to engage in."

Lighten Up really grew out of a project Marcus began at his previous church. He explained, "We got a group of musicians together and I had an idea. Look, we're writing some stuff, let's put it down on CD somewhere. My niece and nephews call me, in Punjabi, Mammoo, which means uncle, and because I'm older than Patrick from Mowglee they call me Big Mammoo to differentiate between the two of us." In 2003 the Big Mammoo collective released an independent album, 'Lighten Up'. When in 2007 Marcus began to again meet with musicians from the differing communities in his area the initiative was (rather confusingly) also given the name Lighten Up. Regular meetings sowed the seed of recording an album. Said Marcus, "When we got together we had to get some praise and worship together and we said, hold on we've got something good happening here. Let's just see what we can do with this so we did some sponsors to raise money to produce the album so I got my head shaved in one event - it's starting to grow back now - to raise money to get this produced. The CD is like a kind of calling card, saying this is what we do and just equip them. I'm hoping the next step will be to take this out to other churches and sort of share what we're doing and say come and participate." 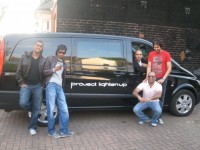 One of the key participants in the 'He Reigns' album was singer and keyboard player Sonia Masih. She has been a Christian since a young age. Said Sonia, "I really felt the impact of going to church and really feeling God and understanding for myself that he was real and just growing up being really interested in music I think that was the main kind of focal point with me that drew me into church and kept me there."

The recording for 'He Reigns' took place at Stourbridge's Raindance Studios (where Mowglee had recorded their 'Revolutionized' album). Remembered Sonia, "It was fun at the time because it was the first time I had recorded. Hearing the music back and hearing your voice back was fun but weird. There was quite a lot of pressure as well because Marcus (the producer) was saying, 'Come on, get your vocals down.' But it was good pressure and we got it done which was the main thing."

Despite some excellent vocals from Sonia and some fine playing from all the singers and musicians involved, the tracks which really stood out on the album were the two songs not sung in English. "Sangat Kharri Hai Tere Duaar" was a haunting worship song sung in Hindi. Even more arresting was "Heliluia Sada Gaenge" where the tablas, tumbis and dhols lock into an irresistible bhangra beat in one of the most joyful celebrations of praise one is likely to hear. The vocal, sung in Punjabi, was provided by yet another Masih, Jason. Explained Marcus, "He's a hairdresser barber and he's the one that shaved off my hair when we were looking for sponsorship to record the album. He's only 22 years old but when we played 'Heliluia' to people they said, 'Where did you get this guy from, he sounds like some 40, 45 year old singer!' Jason goes to a fellowship in West Bromwich. There are quite a few Asian fellowships dotted around Birmingham and the surrounding areas."

Marcus, who when not involved in church activities works for Her Majesty's Prison Service with a unit called the Interventions Group helping prisoners to kick drug habits, is keen that the Lighten Up project develops. "We set up this group aimed at young people - 20s to early 30s - so we get a whole range of people coming in. When we started we went, 'What shall we call this project?' and began looking at names and stuff. The only thing that popped into our heads was Lighten Up - let's just lighten up for God. So that's what stuck."