LIMIT X have come a long way since we last spoke to them in CR13. George Luke catches up on the news from the African gospel ambassadors. 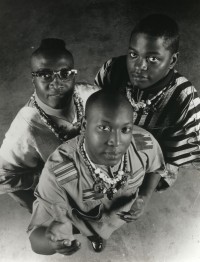 It seems like only yesterday that four young men from Uganda brought a breath of freshness into Britain's black gospel scene. With their lush vocals and unique fusion of African and western musics (not forgetting some of the most outrageous haircuts known to man), Limit X won the hearts of Christian and non-Christian music fans alike. They earned a reputation as one of the hardest working groups on the gospel circuit, leading up to their winning a DMi award in 1992. Then, almost as suddenly as they'd appeared, they vanished.

Or did they? Not really. Getting established in Britain was one stage in their bid to become one of the world's biggest bands and having achieved their objectives here, it was time to move on to the next stage in the master plan -taking on America. Now with a new album, 'Malibongwe', and a single, 'Fallen In Love', both zipping up America's Contemporary Christian chart, "that African group from London" (as the Yanks call them) look set to repeat the success they achieved in the UK, but on a much larger scale. They recently flew into Britain en route to the Continent for some promotional work, and I had a happy reunion with the guys and a chance to discuss their adventures in the US of A.

The group made the decision to leave Britain in early 1993. "God was saying 'Go', so we just had to obey and go," says Isaac. By this time they were a three-piece, as Paul C'Roy had left to further his education. Now, prior to all this, way back in '92, the group had been in touch with former UCB jock Steve Nixon, to whom they gave some of their material. Nixon (who later relocated to the US to work with Scott Blackwell) had passed on their recordings to Scott, but he lost all their details and was unable to get in touch with them. Dennis takes up the story: "We went to America and bumped into this guy who was one of the best DJs in San Francisco who had become a Christian, and he knew Scott because they both did the same thing. He said to Scott, There's this group from Africa that used to live in England, they're now here and I'd like you to meet them,' and Scott said, 'Limit X', and he was like, 'How did you know?' We met and talked and then we went back home (to Uganda). When we went back to America in March '94 Scott said, 'Hey guys, I really want to work with you.' We signed up with him and now America's our base."

Response to their debut recordings on the N-Soul label has been phenomenal. "Americans always want something that's new, that's unique," says Paul, "and Limit X is just riding on that wave. And all the African Americans are into getting back to the roots, so they're like, 'Wow! This is roots, man!', and they're digging it big time. The white folks are saying, This isn't black gospel the way we're used to hearing it, this is different.' It's being eaten up by all of them." Limit X have been featured on several TV shows, including the ones hosted by Bobby Jones and Leon Patillo, and on radio stations across America, plus TransWorld and the BBC World Service. The critics have also been impressed; one writer described them as "What you would have if you crossed Ladysmith Black Mambazo with Boyz 2 Men."

But all that pales into insignificance compared to the reception they have back home in Africa. They are now one of the biggest bands (if not THE biggest) not only in their native Uganda, but in the whole region of East Africa (ie, Uganda and neighbouring Kenya and Tanzania). "We've always made sure we go back for at least a month every year," says Isaac, "and things have just been building up. Now we can't play small venues any more; the crowds are so large that we have to play in stadia to around 20,000 people at a time." "When we go," says Paul, "we normally do workshops after the concerts, and we tell them (local musicians) not to try to be stars overnight. Just be the best at what you do and the 'star' thing will come." "Also," adds Dennis, "the hippest groups over there are beginning to sing gospel because of our influence. Our videos go on the air next to Michael Jackson's and Hammer's. This has given us a platform to preach and tell people that Jesus loves them and it's cool to be a Christian. The kids out there dress like us and talk like us, but, above all, they're intrigued by our lifestyle." They have a valuable ally in the form of Mrs Museveni, Uganda's First Lady, who also happens to be a Christian, and sets up large youth conferences for them, as well as organise gigs where they perform to Uganda's elite - royalty, government officials and diplomats. They still support an orphanage in the country, which they hope to manage one day, and also plan to open another in Rwanda.

While they lived in Britain, Limit X had been brave enough to venture onto the V show The 291 Club. Not only that, but they had been one of a tiny number of acts that was actually liked by the audience (which, if you never saw the show, had to be the most bloodthirsty audience since that lot who used to root for the lions against the Christians years ago). However, they have not made an appearance on Showtime At The Apollo, the American show that 291 was modelled on. This, they insist, is "not because we're chicken" but because they feel they have outgrown talent contests. "We did try to get on one," they say, "but the organisers wouldn't let us go on because our standard was too high, too professional. Besides, we haven't been to New York yet. When we do appear at the Apollo, it will be as guest artists, not as contestants on Amateur night."

The appeal that Limit X holds for African Americans means that they often find themselves challenging that other belief system fighting for the souls of black America - the nation of Islam. "We don't see the nation as a challenge, but as an opportunity to tell the brothers the real truth," says Dennis. "The nation is telling these people that it's a 'black thing' or an 'African thing' to be in Islam, which is not true. If they (African Americans) want to go back to their roots, they should go back to serving their traditional gods. In Africa, Islam started with the Arabs, and it was they who started selling slaves in the first place. We get the chance to educate people that Islam isn't a 'black' thing and Christianity isn't a 'white' thing, either. And some people are listening."

As far as work goes, the rest of '95 should be a very busy time for the guys. In addition to visiting Uganda with Linda and Steve Tavani, they will be writing songs for, and producing, Scott Blackwell's next praise project, 'Afro Praise'. In between, there's plenty of fan mail to catch up on (Dennis usually has the job of replying). They will also be touring Europe and look forward to being back in Britain. "Although America's now our base and Africa is home, the UK is still very important to us," they say. "We lived here for quite a long time and made a lot of friends. A large chunk of us is here."

I Luv these folks besides âIsaac was my college mate @ High School & lad mateâ Back in day!!
Life is Good and Thank God for their audacity under fire. To see them come together Once again?? It happens hardly after such a long spell!. We do sincerely hope God can use them thru Music. Ps

my grandson and i listened to them at church in Eunice Louisiana we have one of their tapes signed; but would to get more tapes ,where ever they are may God Bless the

i loved this band and still love their music. One song specifically they used to perform on stage but have failed to find it anywhere and it was something like ''you are bayetti nkozi...... please help me reunite with this tune

The song was by First Love from Uganda.

They visited Manila way back in 96 when I was a young kid and I remember playing their tape over n over again on full volume. Miss those days. I wonder where they are now.

Would like to know how the men who formed Limit X are! And what they feel Yahweh is speaking to them 😀

In 1995 my children and I saw a limit X in Tokyo Japan. We loved them and have listened to their music ever since. We came back to the states in 1998 and we saw Dennis-if I remember right- at our church in Tinley Park Illinois. We talked with him and his wife and they were so nice and he remembered us from Japan. Since then, I haven't heard anything else about them. What is Limit X doing in 2015? I tried looking them up on the Internet and most information is old. I sure would like to know what they are doing now and if all is well.

Limit X was in Louisiana several years ago, my son bought a CD and I loved it.His car was broken into and they stole his case with all his music and I have been trying to find that CD ever since. I am 60 and LOVE that music. If that music dosen't get you up and on your feet nothing will. Awesome music.