How a Celtic-influenced author and a classically trained woodwind player are changing what is meant by the word "meditation". Mike Rimmer reports on LIZ BABBS & SIMEON WOOD. 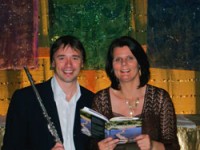 For their second collaboration, inspirational writer Liz Babbs and musician Simeon Wood have created 'The Pilgrim Heart'. It's hard to know how to categorise it. It's a book, it's a CD, it's aesthetically pleasing with its artwork. The publishers call it a CD Gift Book. Wood laughs, "I prefer 'CD and gift book' because the CD is first." Spoken like a true musician!

Best selling author Liz actually chooses to describe it properly. "It's basically a colour gift book with lots of thoughts and some quotes from other people and poetry from myself, that lead people on a journey closer to God. Simeon's composed some lovely music to go along with my words and it's all original; the music. It's great for the lead up to Lent or any other time for reflection or time out. So you can either look at the pictures, the photos, or read some of my soundbites of Scripture or poetry, or listen to Simeon's music, or do all three!"

I observe that they're reluctant for the whole thing to be too precisely pinned down because, well let's face it.they're artists! They laugh. So perhaps I won't have to watch my step too carefully. With artists you never know when they are going to flounce out the door in a strop.

Babbs came up with the concept because she wanted to have an interactive way of reflecting and praying. Wood describes how the collaboration worked. "She would send me a first draft of the book and I would read it and be inspired by that and send a first draft of music to Liz. And it would go back and forth like that."

This is their second collaboration. Their first, 'The Celtic Heart', opened up many doors. Babbs shares, "It's been a best-seller for us. We've performed it in concert all over the place and we're going to be taking it up to the Edinburgh Fringe in the summer as an outreach presentation concert again. So we're going to look for funding for that obviously but it's good to have a vehicle like that, so people will come to it but it doesn't Bible-bash them. It gently outreaches."

The idea of mixing inspiring writing with instrumental music came from Babbs' observations. She says, "I think because I find it difficult to pray and I'm busy and so are lots of other people. They haven't got time to pick up thick books. I think we need a multi-media approach. I really do, these days. It's such a visual age that we live in and people are just taking in things in different ways. So I wanted to have ways of people being able to listen, through the music. Being able to look at photographs and visual imagery - the DVD when we're doing it in a performance. And also soundbites of poetry. Some of them is shape poetry so you only have to look at the shape and it says something to you. And then Scripture. And then sort of a gentle introduction to where you are in your life's journey and where it might be going. That's where people are at. That's where non-Christians are at too so it wonderfully bridges both markets."

Babbs continues, "It's also for people who are totally churched out and want something simple to access. This is one of the reasons why Celtic spirituality has become popular, because it's simpler. People like the Celtic worship, the simple uncomplicated words that they're using. And often, if you're in a more orthodox church, the liturgy can be very repetitive or heavy. So I think we need new ways of drawing closer to God. I think that is what my job is, to help Christians root deeper into God but also to outreach at the same time to non-Christians." 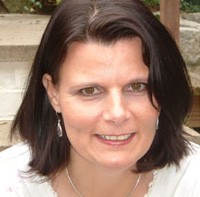 As it turns out Simeon does agree! "Yeah on the music front, certainly on 'The Celtic Heart' we had to very much aim at Celtic style of music. Although having said that the instruments that are used on there aren't Celtic. But it's very basic. It's very simple. Whereas 'The Pilgrim Heart' has certainly moved on a pace. There's a lot more rhythm involved in 'The Pilgrim Heart' whereas with 'The Celtic Heart' we stayed away from that. And that was partly because of where the publishers were coming from. Lion particularly didn't want the rhythmical side of it. They wanted it very gentle so I stayed away from percussion and from rhythm. With 'The Pilgrim Heart' we've just moved on again from that. We used quite a lot more world percussion and so it isn't in that pigeonhole of Celtic anymore. It's moved much wider into world-style music."

This is their second project together, with a third 'The Restful Heart' on its way. How easy is it for them to collaborate? Babbs responds, "Very easy actually. Simeon and I get on very well. I love his sense of humour, fortunately! I hear he likes mine! Some of his jokes are terrible though! It's very easy because we're very in tune in the Spirit. I think Simeon has a lovely, gentle spirit. He's very creative and I love to work in different ways myself. I love working with musicians and other artists. It's a great privilege and it expands what I can do. Two is stronger than one, you know? I think there's a real power and anointing on what we do so I thank God for the opportunity."

Simeon Wood is obviously used to collaborating from his days as half of the meditative music duo Simeon And John. For these projects, does he feel as though there is any artistic compromise? He's quick to respond, "No I didn't feel as though we did compromise at all. I am by nature not a team player and that includes one other person. I am very good at working on my own, and working with someone else I find very difficult. But the way Liz and I worked was she knew my strengths and I knew hers and we left each other to our own resources. We didn't cross over at all."

Babbs jumps in, "It works well. I've got a huge respect for him as a musician. I was using his music on my meditation CD, 'A Quiet Place', before we were ever 'allowed', if you like, to work together live and to produce material together. Which was always my vision. Even back when I was producing my own meditation CDs with his music, I wanted it to be a live thing and it wasn't allowed to be at that stage because we hadn't got the freedom to work together in that way, because of contractual responsibilities. So it's lovely now having this open canvas to be able to work in that way."

The gentle spirituality of their work means that it is also accessible for spiritual seekers, especially in a live setting. I wondered what kind of feedback the pair had received from people who aren't Christians. "They usually love it," Babbs reports. "And they don't normally have a problem with the whole Christian concept because once you've told them what it is and how it's rooted 2000 years ago in the Bible, they're really quite attracted by it. Obviously I lead them gently into it. I don't sort of hit some of the big issues immediately. I do just some gentle breathing exercises and I'll use words like 'peace' and 'be still' and I don't connect Biblical connotations to it until a little bit later on, and then I'll introduce something to do with Jesus. So it's just a very gentle journey which is, I think, also the way you need to work with Christians. You can't try and hit them with things, as we have in the past I think."

Wood adds "And to be fair, the music and the visuals are far from a religious nature." Babbs elaborates, "They're very Creation-orientated, which some people would think was New Age but I mean, our God is the Creator of Creation! And many people have found God in Creation by going for a walk. And there's the whole business of 'prayer walking' isn't there? So it's lovely to have natural visual images as part of a concert. Because to me that brings it all together; God and his magnificent Creation, which is created for our enjoyment and for us to be good stewards of. Which we often forget I think. And tie it in with God's Word and anointed music and song. It's a bit like a mini retreat without having to go on one."