Liz Clarke: The Belfast-based singer soon to embark on the Celtic Dream

For those in the know Liz Clarke possesses one of the best voices in the entire crop of singer/songwriters. The Belfast-based singer, whose 'Path Of Dreams' album was recently released by Plankton Records, is versatile too. Her music touches on folk, pop and, on the opening song of her latest, Bangra/Indian flavourings. But the word most often used to describe Liz's haunting sound is "Celtic". Was Liz happy with such a description? "My music has been described as Celtic, and to me that's fine, I am a Celt after all! It's in my blood, and I do love Celtic music. I would say most of my music has a 'Celtic flavour' however I love to experiment with different sounds and I love all different styles of music, including jazz, blues, ambient, world. I think these influences can also be heard in my music."

Liz was born in Belfast. She had three brothers. She explained, "My parents were good people but they weren't Christians, so I never really heard the Gospel until I was around nine years old when a neighbour began to take me to a weekly children's meeting. My claim to fame is that I lived in the same street where George Best had lived. I suppose it was an average working class family, my dad was very strict and I knew to avoid getting on the wrong side of him. My mum told me I used to sing from when I was very young. My grandmother had a beautiful voice and also played piano. She taught me my very first songs, my favourite was 'Bless This House'. I always dreamed of being a 'singer' and that's all I ever wanted to do. I got involved in singing in the school choir. There was a teacher who encouraged me greatly and through her I entered and won four Silver medals in the local music festival at the age of 12."

At the age of 13 Liz had an encounter with God when a couple of friends took her to a Christian meeting. She recalled, "I went forward and was zapped and fell to the ground. I had not a clue what had happened, I knew nothing about spiritual things then. Unfortunately I didn't continue at that point in my Christian walk. It was many years later, having married at an early age, finding myself with two small children, feeling desperately unhappy and suffering from a deep depression, that I finally cried out in my desperation to God. That happened, not in a church, but in my own living room. God just found me right where I was and filled me with his real and lasting peace."

Joining a small Pentecostal fellowship Liz - who hadn't done any singing for a number of years - was encouraged to join the worship band. "I really enjoyed that. We used to put on concerts on a Saturday evening about once a month, and I loved to sing and testify about the love of Jesus. I then started to get invitations from other local churches to sing at their services, and it just grew from there."

In 2001 things began to fall into place for the singer. Liz was attending the local Elim church and had begun to write her own material. One of Liz's friends was Roberta Clements, a well known Irish singer with numerous albums. Remembered Liz, "Roberta arranged for me to meet Leslie and William, the owners and producers at EMS Audio studios, with a plan to record some demos. However, after hearing my songs they decided they would like to take on, and finance, the project. They recorded and produced the album 'Worshipping Warriors: Seeking The Presence Of Jesus' and even put together a live band for the recording, and for the launch night. The album, I believe, had a prophetic dimension to it." 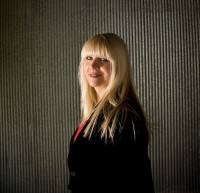 Liz's ministry was established and the next few years more concerts and recordings followed. "I continued to sing locally wherever I was invited to go. I recorded an independent album, 'Into His Presence', and an EP, 'Breath Of Heaven', during this time, but they weren't widely distributed or advertised. I also released a single entitled 'A Mother's Love', which I wrote in memory of my mum who died from cancer. It was played quite a bit on our local radio station. I sold over 500 copies, and was able to donate the money to Marie Curie cancer care. In 2009 I released the album 'The Dream'. Being able to record the album at a friend's studio in Tennessee and having Chester Thompson of Genesis fame play on a couple of tracks were memorable."

Also in 2009 Liz met up with Vivienne Neville, the English singer with whom Liz was to subsequently record and tour. Liz explained how the link up occurred. "My booking agent in England had booked a week long tour in November 2009, and one of the churches was Viv's church. It was an Anglican church, where her husband was also the minister. After doing the concert, we started to chat and we just hit it off right away. Our friendship flourished and we began to do some gigs together. We have become good friends and have been working together in various projects (including a much praised Christmas EP) since."

In 2010 Liz released her 'Pure' album. She said, "The 'Pure' album is special in the way the songs were written. All the songs were co-written by a brilliant local musician/producer, Paul McIlwaine, and myself. We met through an online music site. We liked each other's stuff and decided to try writing something together. We seemed to work well together and just kept writing, never having met, everything was done online. The first time we met was two weeks before the album's launch night. We met for a couple of practises. It was kind of different, but it worked."

Vivienne Neville introduced Liz to Britain's longest running independent label Plankton Records and it was Plankton who issued an amended version of 'Pure', now under the title 'Path Of Dreams'. Explained Liz, "It had re-recorded vocals and a complete remix, so it sounded the way I always wanted it to sound."

Today Liz works part time for a housing association in Belfast. But it is music that continues to take up a great deal of her time. She recounted, "I have recently been offered, and accepted, a singing role in a new music and dance show called Celtic Dream. It is a professional show and will mean the opportunity to travel and enjoy singing in a professional capacity. I believe God has opened this door for me to 'go into all the world' and shine the light of his glory through my life. I am also planning to release a joint Christmas album this year with Vivienne Neville, it will be released through Plankton in late October. I am also continuing to write with Paul McIlwaine and hope to release an album of our songs in 2012."

So what is the underlying purpose behind Liz's music? "It's to bring glory to God, whether I'm singing a worship song with Christian lyrics as I lead the worship in my church, or whether I'm singing a secular song with non-Christian lyrics in a theatre somewhere. I pray that the light that's in me will shine forth from my life in a real and relevant way to those around me, and they will see Christ in me."

Liz, am so enjoying the "Emmanuel" CD. I play it every day and think of you and Viv. I was so blessed to meet you both on the Witness Ireland Tour. Shall always pray for your work in the Kingdom of God and for beautiful Ireland! Be blessed and keep on singing.

I WISH LIZ ALL THE BEST SHE DESERVES IT LOVE AND GOD BLESS FRANCES RAMSAY.