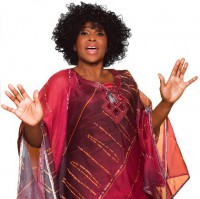 The book Uncloudy Days: The Gospel Music Encyclopedia begins its entry on Liz McComb with the statement, "What Mahalia is to gospel music in America, Liz McComb is to France." The Ohio-born singer and pianist who for many years has lived in Paris, France has become a star in her adopted homeland and her albums, breathtaking live performances and regular appearances on French television have kept Liz in the spotlight. Liz's latest album 'Merry Christmas' is a wily mix of seasonal standards like "Do You Hear What I Hear", "Feliz Navidad" and "The Christmas Song" and numbers which one reviewer described as "giving a Sunday morning Baptist Church reading to 'Silent Night', 'Walk In The Light' and 'Oh, What A Pretty Little Baby'."

Said McComb, "I've been wanting to do a Christmas album for ever. I like doing stuff nobody else does; when so-called producers leave me alone, I can create unique things. I listen to the Spirit and let him guide me. When I try to compromise things go wrong. Nothing went wrong on the sessions and there was no compromise. This is Liz McComb at her very best. . . Merry Christmas!"

Liz was born on 1st December 1952 in Cleveland, Ohio, the sixth of brood of seven children born to a factory worker and a housekeeper. Her father died when she was very young. The McComb home was very church-based and she began singing by age three, she and her sisters performing in a group called The Daughters Of Zion. As a teenager McComb listened to mainstream jazz stylists like Sarah Vaughan and Nat King Cole and after studying for a while at the Karamu House Theater she moved to New York with the hope of becoming a Broadway star. Liz's cousin Annie lived and worked in Europe and knew a big concert promoter there and got Liz to send an audition tape to the promoter. He liked what he heard and in the early '80s put McComb with the Jean Austin Singers and then as a member of The Roots Of Rock 'n' Roll revue where she opened for legendary gospel diva Bessie Griffin.

Over the next decade McComb performed on bills with Ray Charles, James Brown and many others but after one of her collaborators, Gregory Hunter, a graduate of the Dream Girls Broadway success, died, she became disillusioned with the European concert scene. The she met Gerard Vacher, owner of the legendary Cotton Club nightclub in Neuilly, France, who was to eventually become McComb's manager and promoter. But though Liz began to get plenty of bookings spiritually things were not right for the singer. In an interview she recounted what had become a crisis in her life with impressive candour. "I fell in love with a European man. I loved that man and that man made me sing the blues and that's not what God wanted for me. I loved him and my mind was on him. The Lord fixed it so that I had to get out of that. My mother said, 'God isn't pleased with what you're doing.' I had to hear her telling me about that. She was praying and speaking in tongues and said, 'You better wake up.' And I did. [Since then] I can truly say my steps have been ordered by the Lord." 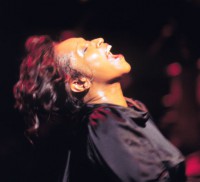 In 2001 her ambitious manager Vacher negotiated a deal with Detroit-based Yellow Rose Records to launch McComb into the US gospel scene. An eponymous compilation was issued in the US, cherry-picking tracks from her various French releases. Wrote Bil Carpenter in Uncloudy Days: The Gospel Music Encyclopedia, "The most outstanding [tracks] were the original 'What Happened To The Love?' and 'Time Is Now' which both boast a seductive after-hours feel as the lyrics probe into deeper elements of man's existence. The album reached number 21 on the gospel chart but did not build an American audience for this gifted singer with a voice that slides from smoothness to raspiness in a blink. Vacher was frustrated that his six-figure marketing investment in McComb failed to make her an American star and gave up on the US market, instead concentrating on maintaining her stature in Europe. Liz released an EMI France gospel CD entitled 'The Spirit Of New Orleans' which received rave reviews from the French press and sold respectably throughout the continent."

Subsequent albums like 2007's 'Soul, Peace & Love' and 2009's 'The Sacred Concert' followed. Speaking about her ongoing position as Europe's best loved African-American gospel singer Liz said, "I made it this far by the grace of God. I'm a flawed woman. I haven't lived everything that God said but I am now. I believe he took me through those things to bring me to where I am now."

I quoted you in my books on gospel music specifically in regard to Roberta Martin. This is a new name for me. Thanks for sharing this story.
www.joyfulnoisepress.com