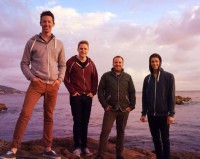 The Wisconsin-based pop team Loftland have been enjoying good sales and enthusiastic reviews for their debut album 'I Don't Want To Dance', rather ironically titled considering the dance-friendly rhythms the project has on offer. The young band (they are still in their early 20s) consist of brothers Dominic and Tanner Gibbs, Ben Pepin and Joey McGuire. The band spoke about their origins. "We've been a band since 2007. Tanner and I started it when they were still in high school. We used to cover Relient K and Switchfoot songs and play shows at local youth groups until word started getting out about us all over Wisconsin. From there we started writing and recording original music and playing further and further away from home. You can imagine how the rest goes."

Dominic explained to the Christian Music Junkie website where their name came from. "When we first started the band we used to practice in this tiny loft above our parents' garage and we referred to that space as the 'loft land'. Eventually we started playing shows and we named the band Loftland after the practice space. It was only meant to be a silly inside joke but it stuck. For us, it's a nice reminder of how everything got started and where we come from."

The band recorded three independent EPs, 'Shhh. . . Just Listen' (2009), 'A New Direction' (2010) and 'Let's Make It Loud' (2013). Shortly after the third, the foursome were signed to Los Angeles-based Dream Records. By the time they were signed the band's sound had changed. Continued Dominic, "We shifted from doing straight up rock and roll in the beginning into more of a dance infused, synth-driven style. It was a gradual and organic change form one CD to the next. Our taste in music changed and along the way we started experimenting with a lot of synths for the fun of it. Mostly it fits our personalities a lot more than our older material. The songs are honest and fun."

The songs on 'I Don't Want To Dance' are a varied bunch. Said Dominic, "We really hope that people will hear the lyrics and connect with what we're singing about. Some of the songs are just about having a good time, some are about reaching for Jesus in hard times, and there's even a couple songs about girls. Go figure! Guys writing songs about girls."

One of the outstanding songs on 'I Don't Want To Dance' is "Runaway". Dominic said, "Runaway is about the story of Adam and Eve, and honestly, the rest of mankind since. It's about our gut reaction to our own sin. Our first thought is, 'I need to hide this. I need to get away where no one can see what I've done.' The bridge lyric is 'Give up, my love is a lion, fierce and free, relentless and violent, you know there's no place left to run.' And that's just talking about how faithful God is to relentlessly pursue us and hunt us down to consume us with his love, despite what we've done. It's the Gospel."

Certainly Loftland seem a band prepared for the long haul. "We spend a lot of time with one another. We're constantly working, eating, sleeping, writing, driving, playing music, and relaxing.together. And usually in very close quarters because 15 passenger vans and hotel rooms aren't very big, you know? When it gets hard to be around one another and all we really want is a little bit of space and privacy, this verse is an incredible reminder of the character of Jesus and how he's called us to live and lover one another. Sacrificially. .Philippians 2: 3,4 says "Do nothing out of selfish ambition or vain conceit. Rather, in humility, value others above yourselves, not looking to your own interests but each of you to the interests of others."