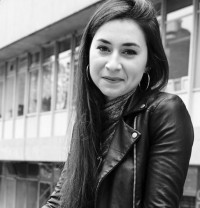 Of the countless new worship songs being posted every day onto YouTube, one of the absolute best is "Great Redeemer" by Lucy Grimble. This London-based worshipper will be no stranger to the thousands who have been touched by her ministry at the Big Church Day Out. Cross Rhythms took the opportunity to talk to the lady about her life and ministry.

Tony: Tell me about the song "Great Redeemer".

Lucy: I got the melody and the chorus about two years ago and it basically just struck me, this idea of redemption and what redemption really means. I've kind of grown up as a Christian, I've grown up around faith. My parents are Christians. Growing up in a Christian home I think you can get a little bit familiar with some of these terms that we hear in church all of the time and that certainly was the case for me with this idea of redemption. As I went through the writing process it felt like God took me on this journey of unveiling redemption to me on such a personal level. It became more than just a concept and a kind of big reassuring idea; it actually became something so personal.

Tony: We are now in the era of worship song collabs. Did you write the entire song yourself?

Lucy: I wrote about 90 per cent of it. I work with a producer called Richard di Castiglione. Richard's a long-time friend and he's an incredible guitarist and producer and writer in his own right. He produced it and we just sort of finished it off together.

Tony: These days you need a video to really push a single.

Lucy: I think with this song it was so important for me to have a powerful visual concept. A video can really help to enhance the message of a song and make it more memorable and it's sort of another way to engage with the message of the song. What I kept hitting on was this sort of visual of the blood of Jesus. That is redemption. You know, outside of the blood of Jesus, there is no redemption. I just kept seeing this image of the blood of Jesus or just of blood, but we wanted to make it obviously not gruesome or scary. Also, I felt the song speaks to this eternal concept. Redemption is this eternal thing, God has always been working to redeem us, but I wanted it to also look beautiful and modern. The video sort of reflects that and we managed to recreate this look of blood by injecting ink into water. The video basically features lots of different colours of ink being injected into water, but always coming back to the central thing of really deep red ink to represent the blood in the chorus, to really connect with that theme of redemption.

Tony: Did your parents work in the church or something like that?

Lucy: No, they're both scientists actually. They're both strong believers so I was raised going to church. Growing up we always said prayers and read the Bible.

Tony: That seems a little bit unusual to me because from my perception most scientists aren't in fact believers.

Lucy: My mum's a Doctor and I think she has really been impacted by how incredible the human body is and how beautifully designed it is. She's always talking to me about, you know, she can't make sense of there not being a God because she looks at the human body and she thinks how can it be so clever and thoughtfully put together and so beautifully designed, there can't not be a God. I think the same with my Dad, he's more of a researcher and works in labs. Again, he just sees faith and science as being totally compatible. So much in science is unknown and there's actually not absolute truth, there's so much uncertainty in science. He doesn't see faith and science as being incompatible at all.

Tony: Tell me a bit about your musical background. Presumably you grew up singing in church in Sunday school and things like that?

Tony: In 2014 you recorded the 'Come And Breathe' EP, but presumably you were writing worship songs before then?