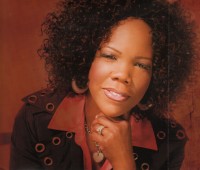 When veteran singers and songwriters Bill and Gloria Gaither began the groundbreaking Homecoming Friends series of videos and album in 1991 they quickly became the catalyst for taking a regional form of gospel - the harmony group sound of Southern gospel - and expanding its audience to first a national and then international sales phenomenon. But the Homecoming Friends videos/albums did more than that. Under Bill Gaither's eclectic stewardship the series presented live performances from an ever expanding range of singers and groups outside of the Southern gospel genre. Middle of the road balladeers, Christian pop veterans, bluegrass performers and country music icons have, over the years, all been showcased on the Homecoming Friends concerts and recordings. But possibly the one musical area which has benefited the most from the series exposure has been traditional African American gospel.

It is true to say that Homecoming Friends has brought a new lease of sales life to gospel man Jessy Dixon. The veteran's career, having started off in the '50s with the legendary James Cleveland and having enjoyed the crossover big time with Paul Simon in the '60s, was more or less moribund until the Gaithers introduced Dixon's fearsome vocal chops to a new, white moms and dads audience. And a similar elevation to major CD and DVD popularity has occurred for Lynda Randle, though unlike Dixon the Washington, DC-born singer had a limited recording career until Homecoming Friends catapulted her into the big time. Randle is, of course, the older sister of Michael Tait, former member of CCM superstars dc Talk and now the lead singer for the Newsboys. With nine solo albums under her belt alongside her numerous appearances in the Homecoming Friends celebrations she runs Lynda Randle Ministries in Kansas City where she and her husband Mike are planting a new church in KC.

Lynda's latest album is 'Woman After God's Own Heart' which is also the name of the women's conferences she stages two or three times each year in various parts of the USA. The singer and Bible teacher spoke to Christianity Today who began by asking her about the phrase "after God's own heart". Said Lynda, "It's from David's story in the Bible. After all of his sins, all of the mistakes David made, God said, 'He is still a man after my own heart'. God's desires for the heart of his children is to be toward him. In my own life, I've blown it many times, but I want to be a woman after God's own heart. And there's security in knowing that God loves us unconditionally."

Lynda exudes this unconditional love and has set about taking care of troubled young women. She admitted, "I have 'little sisters' all around the world. We've got a young girl who wants to come live with us from Norway in 2012. There's a young girl from Kentucky that just lived with us for about a year and I've mentored her, like a big sister. Gloria Gaither recently said to me, 'If you could mother the world, you would.' I said, 'I would. I would bring everybody home and do that.'

"After a recent concert in Pittsburgh, I noticed a girl, about 18, who looked despondent. Her mother introduced me and I went to give her a hug, but she sort of shrunk back. I was like that; I was a rebellious teenager with issues. But I told her that every night when I get up and sing on stage, I'm terrified. I said, 'This is nothing I ever dreamed of doing, especially after failing the ninth grade.' I wanted her to see that I was human, but she still just looked removed and a little bit angry. So that was that. The next day I opened up my emails and this young lady had written me. We started corresponding and she recently said, 'Just wanted to know if we could talk sometime. My family is all out of sorts.' I asked her for her number and asked if I could maybe be a big sister. When I typed that, it was almost an oath on my part, because you do not play with these young kids. You do not get in and out of their lives like you do your bed, or going in and out of a door. You must mean it. But that's what I do. I know I can't bring everybody home, but maybe this summer or whenever she gets a break, maybe she can visit. I don't think I'm the great hope, but I know kids need this kind of attention. If I didn't tour, I'd love to have a youth centre full of girls."

Lynda spoke about some of the songs she's written for her 'Woman After God's Own Heart' album. "I've tried to offer something real. I know all the clichÃ©s that believers say, so I try to write creatively, to say things in a different way. The song 'I Love You Like This' stemmed from the fact that in relationships, people give you maybe two or three strikes and then you're out. But God's like, 'No, I'm in it for the long haul. And this is the way I love you.' That's the message I'm trying to share. 'Hold On' has been getting oodles of response when I do it live. It's about a man leaving a woman, in a divorce or a breakup. The second verse says you can pray and things may not be okay when you wake up the next day-that's what I mean by keeping it real. All I can say is, hold on because God's holding onto you. I can't even tell you to be strong, because I have not walked a mile in your shoes. But I know someone who's carried me over rough and rocky roads, whose arms are strong when ours are weak."

Lynda was born and raised in Washington, DC. She spoke about her teenage years to reflectionsinhindsight.com. "I was going into fashion design and cosmetology. I failed the ninth grade, got put into a Christian school, was not able to take the classes I wanted, so they put me in this choir. I started singing. It was an all white choir. I was the only black person in the choir and they loved doing negro spirituals. God began to use that music in my life and that whole choir situation. They entered me in competitions and I was blessed to win a lot of those. I went on to college, got very, very cocky - high-minded. A dear friend pulled me aside, set me on the straight and narrow. And then I believe at that point, somewhere around 1981, 1982, I surrendered to sing for the Lord in whatever that meant. But I surrendered my life to missions back in '79, I guess it was '80, after hearing a missionary speak and I didn't think singing was on the agenda."

In was 1989 that was the pivotal year in thrusting Lynda into the spotlight. "I sang at a conference in Arizona where Gloria Gaither was one of the speakers. After I sang, Gloria said from the stage, 'I love her. I want to take her home.' Well, she wasn't lying. She went home and told Bill she met this girl and went on and on. I met Bill later that year, but it was several years later before anything came to fruition, when I recorded my first album with them, 'A Way Through' (1995). I was never shopping a record deal - and now we're at seven or eight albums later with the Gaithers."

Lynda's first solo album was 'Soul Shower' released by True Tunes in 2000 but despite a showcase performance of some of its songs at Nashville's GMA gathering, with brother Michael Tait making an on-stage appearance, it didn't sell. It was only when Lynda signed to Bill Gaither's Spring House Records (now called Gaither Music Group) that the Christian public began to take notice. Lynda was at pains to emphasise that her music is not Southern gospel. "If you go to their concerts, it's not just Southern gospel and twanging guitars; maybe only 25-30 per cent are straight Southern gospel or hymns. There's some traditional, some black gospel, some hymns, some praise and worship. I'll sing 'His Eye Is On The Sparrow' and there ain't nothing Southern gospel about that. I'll do Mahalia Jackson's 'Walk With Me, Lord'. Nothing Southern gospel about that either."

Lynda's albums like 'A Tribute To Mahalia Jackson' (2004), 'God On The Mountain' (2005), 'Christmas' (2005), 'Hymns' (2007), 'Lynda Randle Live' (2007), 'I'm Free' (2009) and now 'Woman After God's Own Heart' demonstrate that whether she's singing an old spiritual, a Mahalia Jackson classic or one of her newly minted compositions her expressive contralto is able to handle a wide range of material. She's even prepared to have a go at country-gospel. She admitted, "There's a song that I sing on the Gaither tour: 'The God On The Mountains Is The God Of The Valley'. It's way country. More country than I ever thought I'd sing, but it's true. God is not just good when we have mountain top experiences and when everything's great, but he is the same good God when we're in the valley, when we're in the dark, when we're going through the night - times of heartache and grief. God is there too."

Did Lynda Randle ever record the hymn How great thou art

Love your music your God given talent. I am pastor of a church plant. So wish you could visit us.

Good music.How can I join the choir ?

I do not know why Bill Gaither does not have Linda Randle singing on his Homecoming TV shows anymore . I know he has wonderful singers but God blessed Linda with a beautiful voice I used to look forward to hearing
Linda so much

It was by chance that I came upon the interview. In this clip, the interview struck me as much as the song. We all have stories that fit in the continuem of life-similar at times with Lynda's. I loved the song so much that I had asked a friend to sing it in church. Sadly, Lynda did'nt come out when my friend sang. Tomorrow is mother's day. I am flat broke and cannot give my wife anything--but my heart. I know that Cecelia understands, but I also know that when she receives gift's- her eyes light up.

Lynda Randle and The Gaither Vocal ( Home Coming) makes Me feel close to the Thrown of God. Am Blessed by their Music. God Bless them as TEAM! Amen

Linda Randle, seem to be a beautiful person on the whole and from the points which I have read in the above, she was an un-cut diamond which was not exhibited to the world at large , but I do believe that Gloria may have been that person which God has used to put that diamond under the machine to get its polishing and exibiting needed for the world to be blessed by her singing.

I am a minister and many nights 2 or 4 am when the weight of the ministry keep me awake,I get up and play one of her songs on my wireless, especially I'M Free or The GOD on the mountain,they help me to relax and remember that all is still in GOD's hand.

God bless you all.