MARi: The half Cuban, half Puerto Rican, all American singer

Ever since Jaci Velasquez broke through to CCM stardom back in the '90s, more and more Latin pop gospel artists are finding acceptance and music sales not just with Spanish speaking audiences in USA and Latin America but with English speakers too. Salsa-tinged musical flavours have proven irresistible particularly when fused with pop, dance and R&B rhythms. Now New York-based MARi has broken through to the Cross Rhythms listenership. Her 'Treasure' album produced two Cross Rhythms radio hits, the English language pop dance delight "Shine Brighter" and the Spanish language "Que Todo Mundo Sepa" and now her six-song EP 'Have Yourself A MARi Little Christmas' is set to get the festive radio treatment. I spoke to this exuberant singer about her life and music.

Tony: You live in New York. Were you born there?

MARi: I was born in Boston, Massachusetts. I am half Cuban, half Puerto Rican so I have that cultural background but I was actually born in Boston. I moved to New York in 2002.

Tony: How did you come to faith?

MARi: I grew up in the Lord. I was adopted when I was a very small child. My mother and father took me in at six months old and that totally saved my life. They were a man and woman of God and I grew up in a godly Christian home so they protected me. I did go back and forth, however, to visit my biological family so I was in the suburbs but I was also in the ghetto. One time when I was at the project, when I was nine years old, I'll never forget this day, two men came up to me and said that God was going to use me all over the world, to sing for him and use my gifts and that I needed to have him in my heart. So I said the prayer of faith right there. And they told me that along my path, along my journey in life, I would find the people that would come up to me just like them that would tell me the next step that I need to take, that would be a word from God. Exactly how they told me, it happened over the years. Everywhere I've gone, every time I needed to make a decision, even though I was adopted and sometimes felt alone, I always had him to guide me and tell people to tell me what my next step was to take and it has always been amazing. It's not easy but it's the way that he chose for me and he's protected me from a lot of things.

Tony: I understand that at first you sang in clubs and bars and were spotted by a mainstream record company. 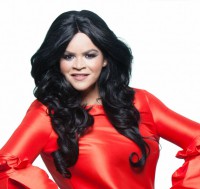 MARi: What happened was I did really well in school so I graduated at about 15 and a half, I was really young. I decided to go into music. The record label heard me sing at a festival. They did play one of my songs on the radio but I started to find myself slip and to backslide, singing in the clubs and bars and starting to drink too much. I was too young and I wasn't ready. So I went to a church, I walked through the door and felt like I was home and that's where I needed to be. The church helped me get out of my deal and helped me then become a worship leader for the next 12 years. During those 12 years, that's when I moved to New York and met my husband Ivan. So I was a worship leader and worship pastor before I even got to the artist side of things.

Tony: Your debut album 'Treasure' has a wide variety of musical styles. Tell me about the song "Shine Brighter".

MARi: Even though it's a different sound in the music, I wanted people to realise that they can be themselves; they can be creative, they can be who they are and they were meant to shine. It was so simple, the lyrics, but it's don't be afraid, don't be ashamed of who you are and be a light in this world.

Tony: Tell me about your Christmas project.

MARi: I recorded it in July! I don't mind, I love Christmas. I'm like an elf, I could celebrate it all year. Last year I was in the Philadelphia Christmas Parade, Chicago, Nashville and I fell so in love with all the music I was like man, I need to not just do a couple of songs, I need to do more; I love Christmas. I'm doing really fun bilingual Latin versions and some of them will be just in Spanish.

Tony: I understand that in 2018 there are going to be two versions of a new MARi praise album released.

MARi: I just spent a whole year recording a full new Spanish album and a full English album that is just going to be completely incredible. 'Treasure' is very dear to my heart but I started getting right back into the studio and I believe this year is going to be really incredible with all the things that are going on behind the scenes that will soon be revealed to everyone. There are some dance tracks, anthems and ballads. I honestly believe that it's the best project I've ever done. I got to work with some major amazing producers in the industry that really put their best foot forward on this project and I'm excited to share it with everyone.

Good conversation between Tony and Mari. I waiting for this new album. Best of luck!

For more on MARi visit the MARi artist profile