Without doubt, the UK release of this record, along with Larry's MGO-organised tours during the spring of 1972, lifted the standards of Christian contemporary music to a new level. MGO also worked through the media for exposure, including setting Larry up with a warmly received meeting with legendary DJ John Peel. Larry's 1972 UK tour packed in 38 concerts in 35 days. MGO also negotiated for MGM Records to release Larry's single "Righteous Rocker". It wasn't a hit but did produce the comment from BBC Radio 1 deejay Alan Freeman, "That's one helluva record!"

Almost unique among publishing and event organisations, MGO was set up as a charitable 'not for profit' entity rather than a private company. Geoff explained, "We were doing it for the mission not for our own benefit. At the same time we were continually living hand-to-mouth, though never made any appeals for funds. However what we did lack was commercial business experience and so David Payne resigned his chairman role in favour of Gordon Scutt, a Lloyds Insurance underwriter." 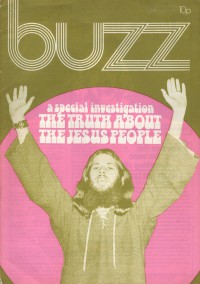 By 1972 Buzz was well on its way to becoming Britain's most read Christian magazine. It's eye-catching covers, like its April issue cover story on Home To Home Evangelism and its May issue Arthur Blessitt On Sunset Strip were much talked about in church circles while its June issue finally turned its attention to the momentous happenings in the USA with a cover story on The Jesus Movement. Buzz told its readers how the Movement was seeing tens of thousands of young people, many of them hippies and street people, converted to Christ. In fact that month America's Jesus Movement was to reach its epicentre when a vast gathering, organised by Campus Crusade For Christ and called Explo '72, took place in Dallas, Texas. There a vast crowd of possibly 200,000 young people gathered to hear Billy Graham preach and to enjoy the music of Love Song, Larry Norman, Randy Matthews, The Archers, Children Of The Day, Johnny Cash and Kris Kristofferson. Buzz's article on The Jesus Movement featured quotes from Larry Norman and one from Time magazine, "The Jesus People believe totally in the awesome, supernatural Jesus Christ, not just a marvellous man who lived 2000 years ago, but a living God who is both Saviour and Judge, the ruler of their destinies."

The same issue of Buzz ran an article on British duo Malcolm & Alwyn which began, "So far the media have been unable to discover anything happening in Britain which they can conveniently label 'The Jesus Revolution'. But that doesn't mean that nothing is happening. Take Malcolm Wild and Alwyn Wall for instance. They chased down most of the blind alleys that were also pursued by their American counterparts. And now they both say with open sincerity, 'Jesus makes us happy.'"

In August 1972 the Festival For Jesus, organised by the Festival Of Light, was held in Central London. The Festival Of Light was a much publicised initiative which had begun in 1971 to combat what many evangelicals felt were the decline in public morals. Buzz published a special colour edition for Festival For Jesus. That issue of Buzz also contained A Very Special Childhood interview with one of the FFJ participants, Larry Norman. Others at FFJ were Cliff Richard, Graham Kendrick, Gordon Giltrap, Dana and a band who up to that time had been called Trinity Folk. Now with a new name, Parchment, Sue McClellan, John Pac and Keith Ryecroft sang the song "Light Up The Fire". Explained Geoff Shearn, "We had been looking for a theme song for the Festival For Jesus. Trinity Folk had done a concert at Coventry Cathedral. John Webb had returned with a makeshift recording of a song which he gathered us all round to listen to with great enthusiasm. The sound quality was appalling but the song - 'Light Up The Fire' - shone through. We knew we'd found exactly what we were looking for."

Geoff continued, "We also knew we had to raise the standard of the production of the records we were involved with. Up to then we'd been doing it ourselves - learning as we went. Asking around for a real record producer, we were introduced to John Pantry, a young man who was to become a major force in contemporary Christian music as a writer, performer and producer." (Pantry is today a popular broadcaster on Premier Radio.)

The "Light Up The Fire" recording session went well. Then MGO took a further step towards widening their boundaries, with David and Geoff negotiating the single's release through the mainstream Pye Records. Today a school assembly classic, "Light Up The Fire" came within a whisker of breaking into the Top 30.

As a result of the song's success MGO was approached by ATV Music for the publishing rights. Geoff remembers, "Dave did the negotiating while I just sat and listened. This guy said, 'We're prepared to offer an advance'. David said, 'What kind of an advance?' The guy said, 'We'll give you Â£20,000'. It was an enormous sum in those days and it rocked us back on our seats! In that split second I remember Dave looking absolutely shocked - our innocence meant we had no idea of the going rate - but he instantly recovered. He rocked forward, slapped his hands on the table and said 'That is ridiculous! Geoff, come on, let's go.' It was the turn of the ATV guy to fall back in his chair with shock."

Getting airplay for Parchment's "Light Up The Fire" was next to impossible. One Radio 1 deejay even said he wouldn't play it even if it got to number one. But the then off-shore commercial Radio Luxembourg gave it lots of time, thanks to the sweetener of them receiving a share of the publishing of the B side. These experiences opened the eyes of the MGO trio to the importance of music publishing as a means of income. Geoff Shearn commented, "Initially we had no real idea about publishing. It just seemed wrong that some third party publisher was simply collecting revenue where we were committed to actively promote the artists and promote their songs."

With that in mind, MGO were determined to keep the song in its newly-formed publishing subsidiary, Thankyou Music. The name from Pete Meadows. As it turned out Thankyou Music was to become, in the years ahead, one of the largest and most significant publishers of Christian music and one of the foundation stones for the worldwide growth of modern worship music.

Pt 3 of this feature will be published on Sunday.

Beat Capital 70 (not "Capitol): you mention my band Time Ltd as having "disappeared as quickly as they arose". In fact, we had been playing together since 1968, and appeared on the earlier BC68 concert at the Phil. We disbanded in 1971, and the singer, Elaine, and I joined Keith Rycroft in a folk-rock band called Dovetale, which had a life of a couple of years, before Keith joined two of Trinity Folk in forming Parchment. Just for the record :-)

This brings back great memories. I remember well promoting a gig with Judy with Dave Cooke playing with her down in Yeovil, Somerset. A great night. There were several acts that night. If I remember rightly Malcolm & Alwyn were there and a band called Something Else Entirely - Made the old church vibrate and nearly gave our minister a heart attack. Pioneering times !!.
Remember Larry Norman - traveled all over to hear him