Considered one of the most beautiful sounds in the history of popular music, the voice of MARIE BRENNAN reached millions with her work with Celtic pioneers Clannad. Now the singer is back with a stunning gospel album. Mike Rimmer reports.

Clannad are a phenomenon. If you're fixated on the UK singles chart, you might not have noticed that the band have quietly been selling millions of albums worldwide and gaining fans year by year. I've long thought that it's ironic that singer Enya, the sister of Clannad's lead singer Maire Brennan, and a lady who spent a couple of years in Clannad herself, has reached a higher public profile through her solo singles and albums than the band itself. What is even less well known is the fact that Maire Brennan is a Christian.

Now as Maire releases her third solo album,-she has chosen to record an album which uncompromisingly presents her faith and appreciation of the Celtic Christian tradition. After a long day of interviews on a Thursday afternoon, I get the opportunity to talk to her and begin by suggesting that some of her fans listening to the new 'Perfect Time' album may be a little surprised at the spiritual content because she hasn't been very obvious about her faith before. Maire responds, "No, but people who would be close to me would know. I s'pose I haven't been out there publicly about it, but as I said anyone who would have bumped into me would know that I am. I have been a Christian for 10 years, it's been a very gradual thing. I used to get worried thinking it hasn't sparked me like the way you always hear so many people. It's been very much something that's kind of built up, and I would hope that it's built up in strength and particularly with Tim my husband, it's a lot to do with meeting him. Before I met him, I was praying for guidance and that was one of the first things that happened to me. It was great because I came from a Catholic background, he came from a Protestant background, we had an awful lot of ironing out to do."

In a 1992 interview Maire told Bread magazine about meeting her husband Tim and the initial steps she took on the journey of faith. "I met Tim at a time when I was searching and praying a lot. I had started going to Mass again and praying the only way I knew how - the Catholic way I was brought up in. I had been through some bad times and felt I needed to re-evaluate my life. I believe the Lord answered my prayer in bringing us together."

Tim was a journalist and photographer with the NME and after he'd visited Donegal to interview Maire, he kept in touch and one thing led to another! They met in 1987 and married in 1990. Maire says, "What was really exciting was that we began to learn about each other's backgrounds and ways of thinking. We were both quite stubborn where we felt we were right, but gradually we learnt from each other and differences were ironed out - it was just brilliant!"

She continues, "A lot of people, if they discuss their beliefs, go immediately to the differences, rather than the common ground, which is so much - maybe 80 per cent or more. A lot of it is more opinion than anything else, your own ideas that you feel comfortable with. There is huge common ground and that's the basis we should be working on. I can't believe that Christians can't see how important it is to break down the barriers."

Maire continues this theme, "I think sometimes as a Christian we tend to be asked to become a certain thing, or act a certain way. I think it's important that the key element in your heart is that God is your Saviour and you believe that Jesus came to save us and that he rose again. That's the strongest part we should build from." 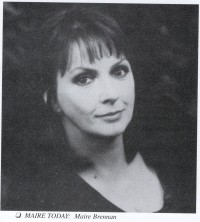 Maire explains the motivation for releasing the album, "When I brought this album out, it's not that I want to go round evangelising about anything but all I can do is give my own opinion about things. Sometimes we get so busy with what we get involved with that when we have prayer meetings or worship or fellowship and Bible studies or whatever and it's very important not to forget to have the precious moments one to one with God. It is still for me the most important thing, sometimes we get so tied up and things can become so complicated that it can be left aside."

I ask Maire to give me some insights into her own times alone with God; does she worship with an instrument? "Just unaccompanied," she explains. "I don't play the guitar. I sometimes play the keyboard with headphones in my own studio." I tell her that I have this idea that she worships while playing the Celtic harp! And sometimes she does! Maire says, "Yeah, I tend to play melodies or just fool around with the harp and it's such a lovely sound, one that's close to God." So it's obviously good harp practise for heaven, isn't it? I suggest that she's going to be ahead of the crowd when she gets there. She laughs and responds, "Well, I'll probably end up playing the trumpet or something!"

Maire explains how she has grown in her faith. "I came into a closer relationship with the Lord gradually, over a period of time, rather than at one particular moment. I was praying a lot and I came to realise more and more that I wanted him to be part of my world - to be involved in everything I did. I was able to turn to him in everything and asking him to be with me, even getting up on stage. He gave me a talent and I want to use it in the right way."

I wondered why she chose to record a solo album with a Christian message now. The answer is as obvious as it is simple. "Because the Lord told me to wait this long," Maire responds straight away. "That's why it's called 'Perfect Time'. I have prayed about whether I was meant to do something Christian. It was like I was a Christian playing music and not a Christian musician and I had no problem with it. I know some people might have a problem with the fact that I'm in a band called Clannad and it's looked upon as New Age, but I've never regarded Clannad as New Age as such."

It seems as though Clannad's reputation for being a New Age band stems a great deal from their work on the TV series Robin Hood. The connection came about because Clannad recorded all the music for the series including the theme tune and the series contained much magic and New Age ideas in its content. Did Maire have difficulty writing material for a programme with such content? She is dismissive, "Oh no, I mean Robin Hood's just a folk hero. I wouldn't I suppose, have looked upon it like that. New Age is a category that we were put under because they didn't know where to put us. I think New Age music is more meditation and mantra like, the kind of New Age music that they actually write now is more like that."

Maire continues to reflect on writing music for the series. "It's just the fun of doing music to pictures. I know there were mythical figures and things like that but if I was asked to do a Disney musical in the morning, you'd do it because it's Disney, but there's things always in Disney that you'd disagree with. It's hard to know how far you can go with these kind of things. You can do as much good by being part of it and declaring that you're a Christian as much as locking yourself away and just staying in one circle."

There is no doubt that 'Perfect Time' boldly declares Maire's faith. She wrote the title song after being on a women's retreat just outside Dublin. She describes it as "really about looking at the burden that we carry with us through time, and knowing that if you know that the Lord is there, to put faith in him and he will do the right thing in his time and for us to know this."

One of my favourite songs on the album is the opening cut, "The Big Rock". Maire explains the inspiration for the song, "The basis of it came first of all from Peter's rock, the Christian rock that was formed. But it's really tending to look upon Ireland's rock as well as Ireland having Celtic Christianity and the strength of it. The chorus, which is in Gaelic, is based very much on the breastplate of St Patrick: he had a prayer of 'Christ above me, Christ below me, Christ on my left, Christ on my right.' And it's basically that type of approach, Christ teach me, Christ guide me and that's the gist of the song."

A beautiful voice, makes the hair stand up on my body.

God bless you, I love your songs but have been waiting a long time to get a full christian album from you, now that it has come am happy and I pray that God will increase is inspiration on you.

Thanks for the great article!