HM magazine described the turbulent music on 'Reset & Rewind' by Canada's Manic Drive as "a dash of funk, a pinch of hip-hop and a sprinkle of metal [which] find their way into the base ingredient of radio friendly rock." That nails it pretty well really. It's taken Manic Drive quite a while to arrive at their current highly eclectic sound. While still at school they recorded independent albums under the name One Cross and by the time guitarist Michael Cavallo and lead singer/songwriter Shawn Cavallo switched their name to Manic Drive they were already highly experienced musos with a wealth of gigging experience. 'Reset & Rewind' has received an enthusiastic response in the US. The album features guest appearances from Whiplash Records labelmate Jill Parr, rapper M.O.C. and former dc Talk member Kevin Max. Michael Cavallo explained to HM how Kevin came to appear on the band's album. "The guy who signed us to Whiplash knows Kevin very well and one day I just randomly said, 'Man, I'd love to work with Kevin.' I was a huge dc Talk fan back in the day and bought 'Free At Last' back in the third grade, so I grew up listening to his voice. So I said, 'That'd be killer to have him on the record.' And he said, 'I think I can make that happen.'"

The first single from 'Resent & Rewind' is "Eleven Regrets", a sad and salutary tale of spiritual failure. Michael told journalist Laura Sproull about its theme. "'Eleven Regrets' is a song simply about falling short in life. For example, when a man shows his appreciation for a woman, he'll usually show up with a bouquet of flowers (a dozen flowers). Instead, he shows up with 11 regrets and one flower. Just a small token of what is expected with a trail of mistakes behind him. Sometimes that's what we feel like when we fall short of God. There are times in my life where I feel shallow of my mistakes that almost feel unforgivable. It's encouraging to know that God is graceful and forgiving."

Another choice cut on 'Reset & Rewind' is "December Mourning", an achingly sad song with a very personal connection to Michael. He explained, "My Grandmother passed away one Christmas and when Christmas comes around now, it reminds me of her. Many people lose loved ones at Christmas and so we wrote 'December Mourning' knowing it would hit home with a lot of people."

Not many bands can trace their origins back to their days as nine year old musos but that's how it began for the group. Then, as One Cross the brothers Cavallo played concerts. Remembered Shawn Cavallo, "We loved music so much when we were little kids that we started writing, performing and even recording at the age of eight and nine. While my brother and I were growing up, our relationship with God and our music kind of grew together. So, we've always used music to communicate God's love to people." 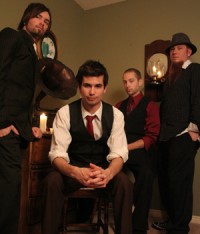 One Cross made a number of independent recordings. 'World Gone Crazy' (1997), 'Key Lime Cry' (1999), 'Clearly Distorted' (2000), 'Welcome To The Real World' (2002) and 'Limited Edition EP' (2003) didn't exactly set the CCM sales world alight but they did develop the musical chops of Michael and Shawn. It was the addition of bassist Tyler Dolynsky and drummer Travis Blackmore that the band plumped for a new name. Explained Michael, "We wanted to change the name as a way of showing the industry and our fans that we were maturing and growing up as artists and not that kid band One Cross people use to identify us with. How the new name came about was just my brother and I loved the word 'manic' just 'cause we thought it described the band's personality and music. We later added the word 'drive' as in to pursue or to be driven in life. As Christians, we want to live radically and manically for Christ in our lifestyle and pursue him always."

In 2004 Manic Drive decided to put on their own showcase concert during GMA Week, the annual bash at Nashville which brings together the entire American Christian music industry. At Manic Drive's gig were reps from Whiplash Records and the band were signed soon afterwards. Laughed Michael, "It's funny because they [Whiplash] weren't even invited for the showcase. They just happened to show up. But they absolutely loved the show and loved the sound and were like, 'Hey, we'd love to work with you guys.'"

The band's Whiplash debut 'Reason For Motion' with its edgy sounds taking in influences like Linkin Park and P.O.D. got Manic Drive noticed. Remembered Michael, "We had the awesome opportunity to work with some amazing people this time out: the very well respected producer Brian Hardin (FFH, Larry Norman) and excellent engineer Jamie K of Thousand Foot Krutch, who created an environment for us to collaborate on many levels. This project really took things to another level both musically and lyrically."

Now 'Reset & Rewind' is expanding further the band's musical parameters. Spiritually too the band are taking on board new things. Said Michael, "When travelling for hours on end with four guys in a van, sometimes those walls come closing in. We are learning to be patient with each other and embrace one another as brothers and follow our passion and career of music. We are learning to count our blessings and be content where we are in our lives."

i LOVE you guys and i love how you are christains and spreading the world of God in your great music! i love all yours songs i have nothing to complain about and I noticed that you guys always ware good clothes like at the concerts love it !and love you guys!

Great article on sounds like a great band. ('Google-alerted 2 U via the late great? Larry Norman's name) Can Christians be articulate, talented & love Jesus? **Joke!** See Larry Norman's body of work. -May our Lord and Savior continue to bless you. - Selah, Tim Tobin