Tony Cummings spoke to a co-writer and producer of a Platinum reggae hit now a R&B gospel singer, MARANTO

Maranto: "Yes, that's right. We moved to the United States, to Georgia, because Shirann has family there. Our intention initially was to stay with her family for maybe a month or two so I could get some treatment for my eyes. But we started to get some messages from the Lord whenever we would have our prayer sessions. And one of those messages was to her saying we need to stay in Georgia. At the time we didn't know how that would be possible because we had no intention to stay in Georgia; we had no place to stay. But God always makes a way when things must be done. One of the very important things that happened is we met a lawyer, an entertainment lawyer who started working with us. That lawyer recommended an immigration lawyer for us and that lawyer got us work permits so that we could stay in the United States and continue working." 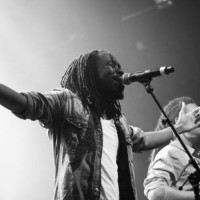 Tony: When you first got to the US, you still had your sight, to some degree, didn't you?

Maranto: "We came to the United States in early 2016; this was when we were trying to get the work done on my eyes. We did some tests and surgeries. The surgeries went well but one of the important instructions after the surgery was that I shouldn't do anything to put pressure on my eyes. And it just so happened that I had a fall and I also had something that resembled flu, so I was sneezing and coughing and that put all kinds of pressure on the eye and it started to bleed again and I totally lost the vision in that eye. After a couple of months of not being able to do anything at all on either one of my eyes, the little vision I had left just faded."

Tony: You must have been hugely traumatised by that.

Maranto: "Oh, yeah. I was in a state of depression for quite a while. It's in this time of depression, where my wife and I would pray together, we went to this church close to where we are now living and a friend of mine is one of the musicians there. He invited us. So we went there; we enjoyed the concert and after the concert we were standing by the door just talking and this lovely lady walks up to us. She's a prophetess who we are now close with and she starts talking to me. I am kind of not really paying that much attention because I don't know this lady but she's saying things there's no way she's supposed to know because nobody at this church knew me. She's saying you're going to record an album, it's going to be gospel and you're going to go all over the world again. And I'm wondering how is all that going to happen because I'm really not in a good state right now. But anyway, she talks and I listen with half an ear and then she turns to my wife and she says some things to her which she later confirms with me that this is some information that she has been questioning God about. And she just got all the confirmation that she was looking for. That was one of the driving factors that led us to say we have to stay in Georgia, we just have to do this."

Tony: So how did the recording of 'Faith Through The Fire' take place?

Maranto: "That was a long and stressful process that we went through. So, we're in Georgia, we don't really know anybody because we've freshly moved from Jamaica. The gentleman I was telling you about, the friend who invited us to church, we asked him if he could get a band together because there are some songs that I need to record. He said yeah, so we get a band together and we go into the studio. Unfortunately, the full band didn't work out but by going to that studio and having conversations with the resident engineer, we got contacts for some other musicians, one of whom was one of the co-producers of Mr Rodney Edge and he gathered up some people who really helped to move the project along. He is one of the main musicians on the project so he and I would sit down and come up with exactly how we want the songs to sound and all the other musicians would just fill in where they were basically told to play. It worked out to be a wonderful project."

Tony: Tell me about 'Faith Through The Fire''s title track.

Maranto: "This song was meant to reflect exactly what was happening in our lives. You notice that I constantly use 'our' because I never leave my other half out of anything. The song reflects our lives over five years or so. This is an interesting thing that I love to tell everybody. I can say that divine inspiration led to the writing of all songs on this project. After I came out of the hospital at one point, we were just at home and the entire first verse of the song just started singing in my head. So I write that down and I sing the idea to my wife and she says oh, that's lovely. Then a week later, the rest of the song comes into my head. It's not like I sat down and decided I'm going to write a song today. That's not how any of the songs on this project came about. It was just at different points that, in my opinion, God put theses lyrics in my head because I had to be the vessel to deliver these particular songs because these are situations that I've gone through. There is a saying that experience teaches wisdom. I've experienced all these things so I know for a fact what I'm singing about. I guess it allows it to connect more with people's spirits."

Tony: I believe you and your wife have got plans to write a book. Is that right?

Maranto: "Yes. We have started to work on that but circumstances caused us to ease back on it but we'll be getting back to it soon. Hopefully, it will be another expression of getting through the fire because I believe there are lots of people who need to know that other people are going through things and actually finding a way out. It's the way out that's important. Everybody knows we all have different life experiences and struggles but they need to know that someone has made it out."

Tony: Presumably, though, you were very disappointed when God didn't heal your eyes.

I saw Maranto's programme on TBN and was inspired to look up more information about him. His song resonates and encourages me as I am having a challenging time at present but his music and message is most encouraging and I am learning much and being refined in my fire.His word that we are not facing it alone is an insightful blessing. God bless you all
Thankyou
Alan Scott - Age 73