Marianne Derbyshire: A grassroots British singer/songwriter with a voice in a million

MARIANNE DERBYSHIRE has a voice most singers would walk on glass for as Tony Cummings discovered at this year's Greenbelt Festival. 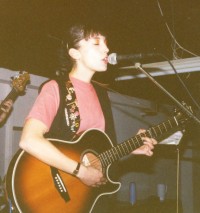 'My parents divorced and I was brought up by my grandparents in Hungary after my mother came to Britain. When I was 12 she married an Englishman and I was brought out to England. I had an absolutely disastrous adolescence. I had no communication with my mother at all - I couldn't speak the language and I was thrown in at the deep end after a very sheltered upbringing in Hungary.

"I went to a rowdy comprehensive school and I had a massive culture shock. After being treated as reasonably bright back in my home country - starring role in the school play etc. - I was considered to be the class moron because I couldn't speak the language and my entire world fell apart. I went to pieces and I started running away. Within two years I was heavily into drugs. I spent my entire adolescence just blowing my brains out with drugs, I lived in a fantasy world."

Always passionate about music Marianne carried a guitar around with her everywhere. But it was only after her marriage and her conversion to Christianity that her musical gift began to take any shape.

"I met my husband when I was 19. He was a backslidden Christian at the time. Very slowly I was receiving the first seeds of truth. One of the first things I did when I received Christ was make a rather, corny dramatic gesture. I said 'Lord take my music'. And something quite dramatic happened. I started writing and I was very prolific and I was turning out a lot of songs - they weren't that good but they were quite good."

Marianne and her husband's Derbyshire's healing process was a gradual one. Rooted in a London house church they gradually made progress in the Christian life.

"For my husband the healing process lasted a year, for me it must have been over about three years, it took that time for me to start seeing the truth. It was a very pleading thing for me 'God, do this.' 'Do that please'.

"I was unable to grasp the responsibility aspect of Christianity. But God did it. All this time the music was developing.

"My music is totally tied up with my spiritual journey, which is why my songs are so emotional, and as somebody said to me 'brutally honest'. This is why I get desperately nervous before a gig. Because I'm not just singing songs, I'm giving me."

Gigs in fact began for Marianne about five years ago. But it was in 1987 when she and her husband moved to Folly's End Christian Fellowship, the Croydon house church run by ex-Eric Clapton sideman Dave Markee, that a fully-fledged Christian music ministry really commenced for Marianne.

"The church was absolutely choc-a-bloc with musicians of a high calibre and I found that very intimidating" recalls Marianne. "But as I started allowing my music to be heard doing little gigs, letting the other musicians including Dave hear my music, the reaction was quite spectacular."

A year ago Marianne was joined on her gigs by Paul and Marion Davis, the bass and violin player in Dave Markee's worship band. She's now looking for a couple of "bluesy, jazzy, soulful backup singers".

As well as playing an increasing number of concerts Marianne has begun recording her first album with Dave Markee. About her future plans she is unsure save for one thing. "I want to keep singing songs that say something about the incredible riches we find in Christ. He's turned my life around. I want to sing about that."