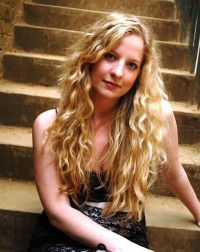 When the Cross Rhythms reviewer was faced with the self-titled album by Mariette Davina he made the intriguing observation that "the artist who came to mind as I played the CD is Kate Bush though a Kate Bush held under tight control by a good producer." Mariette is a classically trained singer who though born in Leicester, grew up in South Africa and her self-financed album was recorded at ICC Studios with producer Neil Costello. Mariette's childhood was blessed by a deeply Christian home. She told Cross Rhythms, "I've always been a Christian. I was brought up by a mother that loved God and always encouraged my relationship with God."

In South Africa Mariette started operatic training at the tender age of 13 and went on to do an Honours degree in music specializing in performance opera. She said, "My dream was always to sing in operas written by Puccini and Cilea. I actually failed composition in my third year of university, my lecturer said I would never be able to write music. I decided to never write anything again! But, I guess God had other plans. I did in fact carry on writing music just for fun and landed a recording contract as a classical/crossover singer/composer in the South African recording industry. I was signed to a South African record label and released a secular album of some of my first compositions and a few popular classical songs, which was nominated for Best Classical Album in SA. My single from that album 'All I Need' was also featured on a successful South African compilation of world music called 'Timeless'."

Mariette explained the circumstances that led to her taking the brave step to relocate to England. "The MD and my A&R manager both resigned from the label I was signed to simultaneously, so I decided to use the opportunity to get out of my contract and follow what I believe was God's instruction to move back to the UK and pursue my music in my birth country. Ironically during that period is when my classical crossover single 'Circles Of Change' was written. It's about not panicking in the changing circumstances, stepping out in faith and going it alone. It's proving to be the most popular track from my album, both in the secular and Christian audiences, so I will be shooting the music video for that song in early 2012."

As well as being a singer and songwriter deeply committed to her art, Mariette also considers herself a minister of the Gospel. "My three years of Bible school have confirmed that, although I am acutely aware that I have both a secular and Christian following. I do prefer preaching to singing though - it's far less nerve wracking and doesn't involve all the vocal gymnastics! I love using the Word of God to encourage people to fulfill their destiny in life. It's so powerful and packed with such amazing insight - it just comes alive when you preach."

Mariette has only the highest praise for the producer of her album, Neil Costello. She enthused, "I know Neil is highly respected in the Christian worship industry, but I wonder if people really know what a keen insight he has in the classical genre as well? I have a tendency to go off on a tangent, developing and creating one spontaneous song after another, but he kept tight control on things. He also had the foresight to team me up with Mark Edwards (piano and arranging) and Patrick Horrax (string arrangements), both are wonderful in their fields."

Since settling in the UK the singer has had some excellent opportunities to perform in concert. Mariette enthused, "I had the privilege of performing at Bristol's beautiful Colston Hall recently, which was a highlight. As more and more churches and venues are starting to invite me to sing, I am currently trying to recruit a more permanent band, but as the music is so heavily based on string orchestration, a three-piece band doesn't really do the music justice, but I'm doing my best!"