MARILLA NESS is a singer of praise and worship songs who is helping to further break down the divide between Protestant and Catholic Christians. Tony Cummings spoke to her at her Cheshire home. 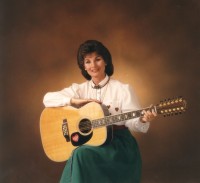 Hers is the kind of Christian Music success story with a fact-is-stranger-than-fiction edge. A 50-year-old housewife and mother of three goes into a recording studio with a group of amateur musicians. The resulting album is released, not by a big company; not by a small company; but by her husband who, when not running his engineering company, can often be found folding inlay cards on the kitchen table. The album is a big success: with several represses, a CD-reissue and bigger sales than most high budget rock gospel albums.

So who is this housewife-turned-gospel-star success? Now there's the real crunch. Few indeed are the Cross Rhythms readers who've heard the name Marilla Ness. It's not just the fact that Marilla's sweet-toned balladry is light years away from the mosh pit and acid rave. Marilla is a Roman Catholic and it's only in very recent times that the Catholic Church is emerging from its religious music cultural prison. As Brian Ness, the mastermind behind gospel music's most unlikely cottage industry, Merciful Love Music, explains: Today we're see the barrier between Catholic and Protestant breaking down Marilla ministry is pioneering acceptance to the idea that God can speak to us through the vehicle of music."

Marilla was born in Caledon, Northern Ireland and while still a small child moved to the Midlands. She'd been brought up in the Catholic Church but it was in the 70s that Marilla began to look for a deeper experience of God. "I was dissatisfied and began to take stock of my life. I realised I wanted more of God. I began to read a lot, the lives of the mystics, and particularly the Bible which I'd never had any encouragement to read in my early church life. And as I began to pray the Lord Jesus became more and more real to me."

The music had started in the early 80s when a prayer group of which Marilla was a member decided they needed someone to lead them in worship. "I thought: well, learning guitar can't be that hard so I got a guitar. It was that hard, of course, but I persevered. After a while people began to hear about my singing and I was asked to go and sing in various meetings."

The meetings became larger and by 1990 Marilla was known by thousands particularly through her ministry at healing services in Tadcaster, Leeds and Manchester. Amy Sage was Marilla's keyboard player while Brian would often accompany her on drums. There were now literally hundreds of people clamouring for a Marilla Ness recording. "I saw that when Marilla was singing people would bring cassette recorders in to record her for themselves. Their tapes must have sounded terrible and I realised that the time had come to make an album." The album 'He Touched Me' was an immediate

Jesus" and "Sing Of A Girl" alongside Protestant charismatic praise choruses from the likes of Chris Bowater, Graham Kendrick and Stephen Fry. Marilla's voice was sweet and pure, with a hint of the same poignant tremulousness that once made Marie McKee such a major gospel star but with (thankfully) none of the tatter's leanings towards Irish country and western. Marilla says: "I get songs from a whole heap of sources. I used to spend months practising songs I intended to record and then end up not using them on the album! Now I'm learning to pray more and be open to what God would have me record."

Marilla's second album 'Holy One Of Israel', was like its predecessor, recorded at Cavalier Sound Studios, Stockport, and was again produced by the studio's engineer Lai Cooper. It also uses largely tried and tested material, this time from the pens of Twila Paris, Noel Richards, Carl Tuttle and Maldwyn Pope, amongst others. In October, she enters the studio for album number three and further sales success for Marilla and Merciful Love Music seem assured. "We are grateful to the Lord for the success we've achieved so far" says Brian Ness Our work is very much a ministry. It's exciting, the opportunities God is opening up for Marilla She's just been asked to perform at an ecumenical conference before 5000 people. Believers outside the Catholic church are now becoming aware of Marilla's ministry. It's lovely to see people touched by the Spirit when my wife sings." And the future? Laughs Brian: "Let's just say I really sense that God hasn't finished with Marilla quite yet."

Marilla,
Very inspiring and brings joy to my soul.

May God bless you in your inspired singing

I discovered your music 2 years ago. Such a wonderful voice and easy listening music. I now have 4 albums and use your Rosary and meditations most nights. So inspirational.

Does malilla ness continue to sing.How can one get all her CD.

Marilla, you are a blessing to me. I love your music and I always pray that God may give you good health so that His love may continue flowing through you to the all world. The Lord is great indeed.

I discovered you entirely by accident.Your " On Holy Ground" dvd included in a bulk lot I bought. Your music was so obviously annointed by the Holy Spirit that I bought more and have given them as presents to others. I wish they were more easily available in New Zealand..my last purchase of On Holy Ground from Pleroma took several months to arrive arrive from the USA. Quite ridiculous I thought.Thank you Brian for your management and support for your wife's talent and ministry..an obviously great team effort.
I am an old time Pentecostal..and an old person of 73 years....but I have always understood there is only one Jesus, one Saviour , one body of grateful believers..whatever their preferred or inherited denomination. Our Lord's commandment that we love one another absolutely MUST overrule all other considerations

Marilla. You stopped me in my tracks when I heard a CD of yours being played in Pauline Media shop in Glasgow.
I heard you live in St John's Church in Uddingston and had a photo taken with you.
Over the years your beautiful pure voice has blessed my soul. I only wish you would come back to Scotland to lead us in worship again. It's been too long. Love and prayers Eunice xx

My husband passed away, recently. I started to listen to Marella's music, it touch my very soul. It has been a great comfort to me. My sister and nieces have all been effected in one way or another by her beautiful voice. With all my heart I thank you for recording these beautiful songs.B

Marillia is truly great keep up the good work marillia keep singing and creating great hymns.thank you for you're great songs and for giving me strength through you're light music.x

I thank God today for enabling me know you Marilla. I have been listening to your music for the past 6 years now and yet I didn't know your name. Your music is just touching and God is using you. What a gift. 100percent unique.

Marilla, you are really blessed my dear! I've been listening to your music through Radio Maria Uganda. thanks

For more on Marilla visit the Marilla artist profile