It might seem a long way from being vocal coach for Take That to fronting a praise and worship band, but that's the path chosen by London gospel man MARK BESWICK. Tony Cummings reports. 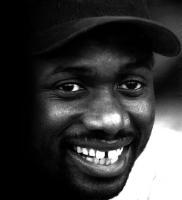 The release by Kingsway of 'The King Is Coming' by Mark Beswick And The Power Praise Worship Band brings to the worship arena one of the most often ignored but creatively vital dimensions of contemporary worship - the huge contribution now being made by Britain's black majority churches. The gospel-based worship songs on 'The King Is Coming' offer something fresh to the increasingly stylised pop rock worship template while also recognising Power Praise as one of the most significant events to have grown within the British Church.

36 year old father of two, songwriter and worship leader Mark Beswick explained how the seminal event began, "Back in 1996 we had a desire to have a day of thanksgiving, just a day when w were focussed on giving to the Lord as opposed to asking him for anything. And so that day was called Power Praise. Out of that grew the ministry of Power Praise. It began as a worship experience event to gather worshippers of all ages and cultures and from a wide spectrum of denominations, uniting the body of Christ through our love for the Lord expressed in worship. These events were the birthplace of new songs of worship, which were recorded live, but also became synonymous with an undeniable tangible presence of God which gave rise to testimonies of healings and visions of angels. The worship songs were performed by the Power Praise Worship Band which comprised of some of the nations most gifted musicians, singers and dancers united in our pursuit for the presence of God!"

I asked Mark who was in the Power Praise Worship Band. "The line up for the band changes quite a bit as the aim is to provide an opportunity for worshippers from varied backgrounds and denominations to work together. However, having said that there are a few key personnel that we try to keep as part of the team whenever possible and they are(along with myself ): Priscilla (Jones) Campbell, Phillipa Thorpe, Angela Hodge, Ruth Lynch, Lawrence Johnson, Brendan Guyatt, Peter Francis and of course my co-writer and our musical director Howard Francis."

Mark grew up in South London. At the age of six with his brother he journeyed to Jamaica and was raised by his grandmother before returning to England in the mid-'70s. Very much a PK (pastor's kid). Mark was attending church from as early an age as he can remember. "I was baptized at the age of 13, but became seriously committed to the Lord in my late teens. As children my brother and sisters (of which I have two) were always listening to and singing music around the house, and it is not an unusual occurrence for Afro-Caribbean parents/pastors to encourage their children to start singing in church services at an early age, and we were no exception. After a while I joined our church organizations (New Testament Assembly) national choir and became one of their lead vocalists. Following this I also joined the newly formed London Community Gospel Choir (LCGC) and also became one of their lead vocalists. I soon began doing session work with the choir which led me into working in the music industry as a vocal arranger and producer for the likes of Take That, Michelle Gayle, Damage and Jamelia".

I asked Mark to give me his thoughts on the often bandied-about phrases "gospel music" and "praise and worship". "There is a tendency in the secular music industry to categorise different styles of music in order to more easily market and promote them. The term 'gospel music' for a long time was used to describe the black American gospel music sound which very often was epitomised by gospel choirs, but in recent times has been widened to include a variety of musical styles that carry the good news of Jesus Christ (which is the Gospel). 'Gospel' and 'praise and worship' music has been categorised by Christian music labels and promotional organisations for similar reasons, but in essence what are being described are two genres of Christian music, one that primarily focuses on issues that address the human condition and how the Gospel can be, and has been, applied in order to address those needs (gospel music). The other categorises our appreciation expressed to the Lord for who he is and for the provision he has made through the Gospel (praise and worship).

"I believe that the Gospel of Jesus Christ expressed through music is the greatest form of evangelism that the Church possesses today. We ought to be seeking further developments in all forms of Christian music (development doesn't mean compromise) in order that we may appeal to the secular music buying public who needs to hear the good news regardless of what we may call it in the Church."

Kingdom greeting.
Indeed the music of Mark beswick is a blessing. I just watch him and the band monistering with a song titled " If we lift Him higher". I humbly request the contact details such as e-mail, telephone for the purposes of inviting him and the band to South Africa.

Having just listened to 'The King Is Coming' Album what a refreshing expression of worship it is ! Highly recommended, as it blends together gospel music and intimate heart-felt praise. there is nothing like rich harmonies and the use of stunning black gospel chords to raise the level of worship in our hearts. Warmest wishes and God's blessings to Mark & His band of vocalists & musicians. Tim Lancaster

We would love Power Praise Worship Band to perform
at The Farfield Halls, Concert Hall on 16TH NOVEMBER 2009. The acoustics are wonderful so come and offer Praise to the Lord.
Tel: 0208 239 1482

Gospel music digs deeper than any other music throughout the world today. And those who make it so, and those who have made it so in the past, form an uncompromising band of Christian saints men and women, who have spent decades in contention with all manner of difficult circumstances.

Few performers have had it quite so tough as gospel singers and it shows in the way they commit themselves within a song: The Christian vision of deliverance from spiritual and social shackles has always held out the greatest hope to those with least to lose and the gospel song is essentially a song of deliverance. The real, breathtaking power of gospel singing cannot be understood as anything less than the ecstatic victory shout of a soul set free at last. There is no music quite like that of gospel music, no drama like the drama of Christians rejoicing, the sinners moaning and repenting, the tambourines shaking, and all those voices coming together in unity, crying holy unto, the LORD. I have never seen anything during my Ministerial life as an Evangelist, to equal the fire and excitement that gospel music carries, without warning can fill a church with the awesome power of God's glory.

Nothing that has happened to me since, can equal the majestic power and the glory that I sometimes feel when, in the middle of a worship song, I knew that I was somehow, by some miracle, really carrying, really singing, as they say, the WORD, when the church and I are singing and dancing, in anguish and rejoicing at the foot of the altar. So let your heart exult wordlessly into joyous song by breaking down all barriers in the immeasurable fullness of your countenance by the words of your songs, whether at the harvest table, in the vineyards, or elsewhere. For true, really, true gospel singers, groups or bands they will always worship God in Spirit and in Truth, and recognise that He and He alone gets all the glory, AMEN

I heard some of your music through some friends of ours from London, it's raining and i we lift him high. I really enjoy your music and would love to buy your cd's

i am a pastor of the a haven of hope Tanzania
i am looking for christian ministry for all over the world to cooperate with them in order to preach the word of God in Tanzania.
welcome to cooperate with us.
PASTOR PAULO E MAPANDE