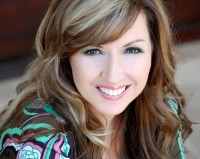 When Cross Rhythms last wrote about Martha Munizzi in 2005 she was already a phenomenon. An independent artist with chart-making albums. The first white singer ever to win a Stellar Award. And a premier figure in blurring the black/white divide that for too long has beleaguered Christian music. Since 2005 Martha has risen even further to become one of Christian music's best known figures and with Provident-Integrity putting her albums into Christian bookshops and Epic Records distributing her CDs into the mainstream, success has followed success. In 2006 her album 'No Limits Live' debuted at number one on Billboard's Gospel Chart and stayed there for six weeks while in 2008 'Change The World Live' was another major gospel and CCM hit and was named in 2009 GMA's Contemporary Gospel Album Of The Year. Also in 2009 God impressed upon Martha's heart to begin the EPIC Worship movement, EPIC standing for Experience A Passionate Intimate Connection with God. Bringing together worship leaders from Florida including her twin Mary Alessi, the goal was to lift up the name of Jesus in an impromptu time of intimacy. They met periodically at different churches to sing and very quickly the movement grew exponentially. Artists and ministers such as Bishop Mark Chironna, Michael Gungor and Nicole Binion joined in. Martha said, "EPIC is a community of people looking for connection with each other and with God. But the bottom line is that we want God's presence; it's all about worship."

With guests like Michael Gungor, Jonathan Stockstill and Danielle Munizzi, daughter of Martha and Dan Munizzi, 'Make It Loud' was recorded live at City Of Life Church in Kissimmee, Florida. Said Martha at the time of release, "This CD is about being bold in our faith. But not just by declaring it, but living it. Whether it's loving or giving or restoring or worshipping, let's do it with some fervour and passion - like we never have before. Let's be more intentional in what we do. Let's have our lives purposely make a statement of faith to change the hearts and the minds of this culture."

Martha told DC Gospel Music Examiner how she came to write the powerful anthem "Make It Loud". "I just kind of had a theme for the album and I wanted to write a song about it. Not necessarily only volume when you think about 'make it loud', but it's about turning everything up, pumping the volume up in our lives. I watch media outlets and pop culture stars and all these people with their strong commentary of what they believe in their songs and their words. They come with these really strong statements of fact and truly they're just their opinion and really in all honesty, they're not even true, you know. And I find that there's so many things that are spoken in our world today that are just so bold and I think, 'that is completely wrong,' but yet it's spoken as if this is actually fact and 'this is how it is, if you don't like it.' And I thought believers should really carry that kind of boldness that's not confrontational or argumentative, but with boldness and a power that says, we have the truth, the Word of God, transforming truth. We need to make it loud and I think instead of shrinking back, stand up and hold the banner in every area of our life. This is the year to make it loud in our love, this is the year to make it loud in our giving, in our joy, in our worship and praise. It's any area that we need to step up and be challenged in, let's make it loud."

One of the surprise guests on 'Make It Loud' is Danielle Munizzi. Enthused her mother, "Danielle wrote three or four of the songs on the album and she sings her debut song that she wrote called 'The Love Of God'. I wasn't sure if we were going to put it on the album but I wanted to have it for the evening, the live recording. It ended up just being so amazing and it was such an impactful moment that we said we can't lose it, we've got to keep it and we were excited to have her. I can't wait for everybody to hear Danielle on this album."

Another of the guests on 'Making It Loud' was William McDowell, an African American worship leader who's previously released 2009's independent album 'As We Worship Live' produced a major hit worship song with "I Give Myself Away" with the viral video of the song receiving a cumulative one million views on YouTube. Martha said about William, "He's another friend. We go way back and I've known him for years. We grew up in Orlando together and spent time there. When we started to do the worship events I reached out to him and said, 'I want you to be a part of this.' When it came time to do the album he was already part of the team. I said, 'You have to be a part of this with me,' so he did it. It was a blessing."

As well as being an internationally renowned worship leader and recording artist, Martha is also a wife and mother. She was asked how she juggled all those balls. "Oh, I'm still figuring it out because kids, they change every year. They need something different. But you know, I would say just really a lot of prayer: 'Lord I need you to help me.' I try to read books as much as I can to learn how other people are parenting and the right way to handle different personalities and boys versus girls and really finding what it is they need and having to say no to some things I would have loved to have said yes to. Over the years we've gone through different phases. There are times when we've had our kids in public school, private school and there's times we've home schooled. We've kind of just gone with the flow of what was happening and what really worked for our family. We have given our kids a spot in our ministry. It's not 'Mom and Dad's ministry and you just come along for the ride.' They help with CD sales, they help with everything. They give us tremendous input in everything that we do. We've given them ownership and that's made a difference."

In her DC Gospel Music Examiner interview Martha was asked what advice she would give to people who are struggling. Her response was forthright. "Well, everybody is struggling at some point. There is no one that has reached this place of bliss. If they have they are probably in their grave somewhere and they're in Heaven, enjoying Heaven. When you live on this earth you will have trials, you will have tribulation, you'll have turmoil and that's just part of it. But he calls us to be overcomers. That's where we live, overcoming, and I know that sometimes things look bad. There are times I complain about issues that I have no right to complain about and then I'll hear about someone else and I will never complain again. When we find a place to be grateful, a grateful place that no matter what I'm going through - 'God, thank you, thank you for what I have, thank you for what you've given me.' I mean that's really where you're going to end up. You're going to have to end up at a place of praise and thanksgiving whether you're sick or broke or whatever, heartbroken, whatever you're going through, so you might as well just get on with it and get to it and just trust God. He'll work it out. I hear people all the time all over the country who say, 'Well, I'm a music director or I'm a worship leader, I just don't feel appreciated.' Welcome to the club; none of us feel appreciated, really, if we're being honest. When we are doing things as unto the Lord we don't even notice when we're not noticed. But when we're doing it for ourselves then we feel like 'I need to be appreciated.' All of us have issues and troubles and at the end of the day God sees and knows and God rewards. He is faithful to complete the work that he started."