Marvin Winans: Once lead singer of The Winans, now a singing pastor

Tony Cummings reports on one of the giants of contemporary gospel music, PASTOR MARVIN WINANS 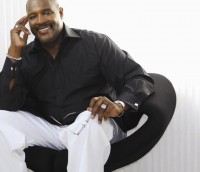 It's a bit of a paradox that the solo debut from a singing pastor from Detroit is also an album from one of the most famous figures in post war gospel music. Pastor Marvin Winans is truly one of the giants of contemporary gospel who with his group of singing brothers, The Winans, took the R&B/gospel synthesis to heights unimagined by previous artists. But now the lead singer and composer of those platinum selling pioneers has taken time off from pastoring the 4,000 member Perfecting Church in Detroit to record the solo album 'Alone But Not Alone'. It's been 12 years since The Winans recorded their final album 'Heart And Soul' and though the soulful tones of Marvin have occasionally turned up guesting on other artists' albums or on the two albums by The Perfecting Church Choir, 'Alone But Not Alone' on PureSprings Gospel is Winans' solo debut. Marvin told gospelflava website, "I'm going to give God the credit for that. I've been working on it for three years. Even though the album is just coming out now, he works things out in his time."

Marvin has little time for gospel artists who recycle biblical clichÃ©s under the guise of ministry. He told Charisma magazine, "It's easy to open the Bible and sing one word for 20 minutes instead of putting your personal experience in it. Sometimes that can be a painful thing."

The production of the album is by award-winning studio whiz and bass player extraordinaire Tommy Sims. Marvin reminisced how he first met up with Tommy in Nashville. "My brother-in-law Cedric Caldwell said 'You've got to meet this guy. He loves you.' Then, I met him but I had never heard of him. When he did CeCe's album ['Everlasting Love'], I said, 'I've got to pay attention to this guy.' He has a sensitivity to music that is rare. He treats it uniquely. That was just a blessing. He's a great musician, he listens. He's respectful in that he tries to hear what you're trying to do and he knows where you want to be. It's wonderful when a musician or singer can trust his producer. It's great to have a producer who is sensitive to the singer's voice and song. I told him, 'You're the producer for the rest of my life.' We'll find other people to do other things but it's going to have to go through the 'Tommy' system."

Marvin had originally planned to start a record label to release 'Alone But Not Alone' but instead put it through his sister's PureSprings Gospel setup. He explained, "I was actually in the shower and the Lord spoke to me and said, 'Just go to CeCe.' So I called her and told her, 'The Lord told me to be with you and sign with your label.' The folks there were so receptive. I told them that they don't have to pay me a whole lot of money and they didn't. Having this church and so many other responsibilities, I needed to be somewhere where I could trust and have a voice. So, it was easy."

Despite his return to the CD racks, Marvin has no plans to embark on extensive tours to promote the album. He said, "I am happy with the album. I am happy to have the opportunity to present something. I think that the album is good artistry and I'm proud of it. Now this road? That's another thing. I'm telling people that if you hear of me in your town, come. There's no telling when I'll be back! Don't you dare say, 'I'm going to go to the movies this time. He'll be back next year.' No, no, no. If it's more than a one-shot deal, it's going to be years in between. It's all been a blast. I have loved my life. God has been good to me. I'm just speechless when it comes to the awesomeness of God. He has allowed some black boys from Detroit to travel the world and make a change. I told my brothers when we first started that God is going to use us to change the face of gospel music and he's done just that. So, I'm good to go.

"Years ago Kirk Franklin came to preach for me. We went to the back and he said, 'Can I ask you something?' I said, 'Sure.' He asked me if I miss being on the road. I told him, 'Oh God no!' He said, 'They told me that you would say that. I just don't see if I could ever live without it.' I told him that when the Winans were on stage, we left it on that stage. I have absolutely no regrets."

It was in May 1989 at the height of The Winans success that Marvin started the Perfecting Church. The first meeting had eight members who met in the basement of his home. He drew the name from Colossians 1:28 which reads, "Him we preach, warning every man and teaching every man in all wisdom, that we may present every man perfect in Christ Jesus." (NKJV). Today Perfecting Church oversees a congregation that gospel artist Donnie McClurkin, a former associate minister at Perfecting, started in New York in 2001.

Delores "Mom" Winans told Charisma she was never surprised by her son's decision to be a pastor. She explained that among her 10 children, Marvin always took charge. Even as a child, he pretended to be a preacher, insisting that his siblings play church while he delivered sermons at home. As a teenager, Marvin preached at his great grandfather's church, Zion Congregational Church Of God In Christ, and later at Shalom Temple, both in Detroit. He started a Bible study at Mumford High School in Detroit, and was a youth leader at church. "He's a leader. He wants to be everybody's father," Mom Winans joked. "He wants to be my father even though I birthed him."

The growth of the Perfecting Church has made the 49 year old pastor a major figure in Detroit. Pastor Winans advocates better housing and health care, operates a school and a transitional home for women and is becoming increasingly vocal on political issues. He has lobbied against gay rights legislation on Capitol Hill and challenged the Detroit City Council's plan to increase the number of strip clubs. He is among ministers who have been invited to the White House, first while President Bill Clinton was in office and three times during George W Bush's presidency.

But the gospel singing pastor doesn't consider himself a political power broker. "I haven't been invited to a fishing trip at Crawford [the president's Texas ranch]," he said. "But I have been invited to meetings where there were 17 pastors from around the country and have been debriefed on trips that the president has made. Folks know I'm no heavyweight in this arena at all. I know if I do my work in the community, it's inevitable that they are going to call. If I didn't look at 3,000 or 4,000 people every Sunday, they wouldn't be inviting me. They wouldn't be calling."

To Winans, speaking out about political issues is part of offering spiritual leadership. "I don't consider myself a political pastor," he said, "but it's impossible to serve as many people as we serve and not become involved in the law and societal changes. We have to affect them. I'm not running for political office, and it's not that I'm dissatisfied. My primary purpose is to preach the Gospel and the primary purpose of the church is to save souls. But I cannot ignore the fact that there are laws that affect society and we have to influence them."

One of the surprise elements to the 'Alone But Not Alone' album is a guest spot from brother and one time member of The Winans, Ronald Winans, who died of heart complications in 2005. Marvin explained the origins of the song "He Brought Me Joy". "One Sunday, I'm at church and God puts this melody in my head and the band just followed me. We stayed in that groove. Another Sunday comes and we hit it again. Then I go home and the Lord wouldn't just let it go. So I get on the piano and start playing it. I came back and Ronald just went crazy. He told me that I had to record it and I told him that I would. He kept asking when I'd record it and I kept telling him that I'd record it. So finally, I went to Nashville and he said, 'Take me!' and I said okay. This was in April 2005. I took him and I hadn't finished writing the next verse. Then all of a sudden, I suggested that Ronald sing the verse that I wrote for him: 'I remember when/I remember well/I got so sick that my heart failed/The doctors came and told me that it wouldn't be long/Informed my family he'd soon be gone/And then I turned my face straight to the wall/Said when I was healthy, Lord I gave you my all/Now if your body is filled with disease/Don't listen to the doubters come talk to me/I can tell the world that I'm thrilled/I can tell the nations that I'm healed/Tell them that my Jesus gave life/Tell them that the Holy Ghost made it alright.' He sang it and he passed that June. I was just so blessed that we were able to get his testimony on tape and let him sing it to the world."

Marvin L Winians. Is one of a special reverend Father to me, then He is my Pastor , Some call him Bishop, Etc... He has been a true friend, he never okay my mess, even thow I,ve been spoiled with Love, By the Church, When my Parents and... oldest Brother died from a house, smoke inhalation, 3 bodies at once my
family, had to take to God. he has always been there for me , that's just one .Hard thing I had to endure, he has been there for many other hurt and pain

He has been a Great Friend to me. He has been there as A Reverened Father to me, I been a member at Perfecting, Church in Detroit , Michigan for about eighteen years or better

A great inspriation, and speaking of Ron Winans now in the presence of God Himself, even though never knowing this family personnally, it has always been like losing a family member, musically has a longtime bassplayer not since the great Walter Hawkins has there been any whole family I can think of so faithful to that ministry they have always touched my soul and hey I am former hardnosed Vietnam Vet it takes a lot to move me!
" But with the exception God's grace! I hope someday I and my wife Tanya will be able to travel and visit there Ministry someday.