Megadeth: David Ellefson, bass player for the metal stars, talks about his faith 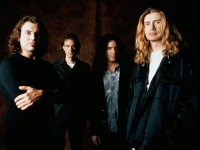 French rock and metal festival Hellfest, near Nantes, may have a name that makes it sound like the Devil's playground, but most years it features a number of Christian artists on the bill. 2018 was no exception. Pastor and heavy music fan Jonathan Hanley met Megadeth bassist David Ellefson to talk about faith, overcoming addiction and seminary training. The conversation was facilitated by common friend Brian "Head" Welch, guitarist with Korn, who encouraged the two to meet up.

Jonathan: I find 'Dystopia' such a satisfying album. I still enjoy it after many listens. Do you still enjoy playing it?

David: I do. I do. Because we won the Grammy for the song "Dystopia", it seems like it is going to be in the sets for a long time. I love a lot of the other songs on the record, though that's the one I really like. I love "Post-American World", which is kind of funny because it's a song that poses the question, "What's the world gonna be like when we're post-American?" Which at one point, probably will happen. No empire has lasted forever. And I think that us Americans, we have a hard time getting our minds around that. Because we have been such a dominant world superpower for so many years. But we're seeing a radical shift in that. Like our current presidency and our current regime - this kind of "make America great again" - which apparently seems to be a sort of throwback to a white predominantly 1950s kind of mentality of what America looked like then.

But at the same time, I come to Europe, and I experience a post-Christian world. When I hear "Post-American World", which is one of my favorite songs to hear and to play on 'Dystopia', and I come here, I'm reminded again of this post-Christian world. In fact, today, we stayed in a hotel that used to be a church. I grew up a Lutheran kid, so I was used to more of a liturgical hymnody and all that kind of thing. In America, there will always be Catholics, I guess, and Baptists are quite prominent, but certainly the Anglican church that was brought over from Europe is largely starting to be replaced by this more nondenominational Bible-based rock 'n' roll music kind of church, which I do personally love. . .

Jonathan: You studied theology in a Lutheran seminary, didn't you?

David: When I did my seminary training - I only did a year of it, a year of a four-year programme - I did it through the Lutheran track, and I love the Lutheran theology. In effect, one year of it really taught me the narrative of the Bible. How it happened is, I went to college from 2005 to 2007, where you're used to reading two-inch thick books every day. So when college ended, I was like, "Now what am I going to do?" So I picked up a Bible and it's about three inches thick, and I had never did read it. So I thought "I'm going to read this."

Jonathan: What does the Bible mean to you?

David: I read it four years in a row. I did theology in 2011-2012, I think it was. And it's awesome, because the Bible, it's one of those books you can read from a historical perspective or you can read it from a spiritual perspective, because it is the inspired Word of God. It's absolutely going to get its hooks in you. That's what it's designed to do. So for me, it was a wonderful transformation. I did not have one of those "bright lights" kind of born-again moments, so to speak. Though my behavior strayed from the Lutheran upbringing I had as a good kid who grew up on the farm in a good family, faith was like right here, in me. I always knew, as I was doing "sex, drugs and rock 'n roll", that it was sort of like the mirror of my consciousness, which I consider is God's Spirit speaking, God's presence. The Holy Spirit was right there the whole time. It's hard to run from that once it's been put on you.

Jonathan: What about rehab and getting sober?

David: It was in 1990. I got sober through the 12-steps programme, and that's what really changed. The last show I played high, and I was really high, it was with Iron Maiden at Donnington in England, the festival that became Download. I was super dope-sick. The agreement was "I come over and do one show", then I had to go home and go into rehab. And that started 18 months of trying to get sober. The hardest part with drugs is to let go actually, because it's like an old friend. An old friend you hate. But it's still an old friend. So I went home to Minnesota in December 1989. I was already in this transformation, coming through the 12 steps with a counselor, to help bring things together to sobriety. My dad always would go to church on Sunday. He wanted to go to church, so I went and something happened when I was there. Whatever that message was, I don't even really remember what it was, it rang true, like the same thing I was hearing in 12 steps. And it kinda brought me back home to where it's all gonna be okay. And it was about two months later that I had my first day of sobriety. And it just clicked. The obsession was removed. But like with all things, it's one day at a time. It was, like Jesus said in Luke 9.23, "Deny yourself daily, take up your cross and follow me". So even Christianity is one day at a time. I was baptized at about a month old. It was "one baptism for the remission of all sins," according to the Lutheran doctrine. So I never felt the need to get re-baptized. But any spiritual journey is one day at a time, depending on what we worship. If we want to worship the Lord, it's one day at a time. As I say, "You either grow or you go."

Jonathan: I've often heard it said that in Europe, faith is more of a journey. In North America, it tends to be more of a state: you're either saved or you're not.

Jonathan: That whole idea of the spiritual journey, it's Celtic Christianity of the best kind. Travelling, one day at a time, one step after another.

David: I love that idea, you're right. In America, people say: "Oh you're Christian. Are you saved?" The founder of the 12 steps (addiction recovery programme), he had this wonderful experience, like Paul on the road to Damascus. But he made recovery into a process. The theology of the 12 step thing is almost like a New Testament approach. It's awesome, because they took it from a biblical basis, the book of James, which they were studying at first. But then they published the book under the name "Alcoholics Anonymous", and they got great traction with that name. So it was interesting as I worked on theology, to study that process. With "you're saved or not," it's "either/or."