Melanie: South African pop singer with a heart for ministry 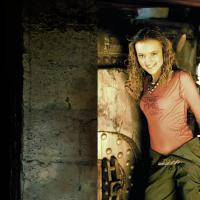 It's important to get one thing right when you're dealing with an artist who's going under one name. Pronounce her name correctly. Melanie explains you have to pronounce her name the South African way. "It's Mel-ah-nie", she explains phonetically "not Mel-an-ie". Hmmmm. I just get the feeling she gets this a lot of the time here in the UK. Mel-ah-nie is over here speaking to the press ahead of a showcase in the evening talking about her most recent album 'Deep'. Whatever the wisdom of using just her Christian name when there was, and still is, an American Melanie (remember "Brand New Key"?) on the scene, it does make sense to drop her surname. it's Steenkamp.

The Melanie I met comes from Johannesburg and says of her life so far, "I was pretty much brought up as a Christian all my life. I've gone to church since I was really, really small. When I was about five years old, I started singing secular music. I started singing cabaret stuff and doing concerts for old-age homes and things like that. When I got a little bit older, when I was about 11, I started recording my first album. It was a mixture of Afrikaans and English. That was a secular album and EMI in South Africa distributed it. With my second album, that was a Christian one and that's when I started doing Christian music, at the age of 13. Since then I've just been singing full-on Christian music. That's what is my real passion. I've done six albums to date."

Not bad for a 19 year old, don't you agree? Thinking back, she isn't exactly happy about some of the artistic decisions that were made for her earlier in her career. I suggest that there are probably photos of her with really big hair floating around the internet. But it's even worse than that! She laughs, "My mum dressed me up a lot. Which was really bad! She would dress me in big dresses, which is totally not me! So when I look back at the videos.! She would dress me, let's say a 'cowboy girl' just to fit the titles of my tracks. But right now, I get to wear my own clothes and make my own decisions, which is really cool."

Melanie confesses that she was 16 when she first became serious about making music for her fellow teens. She remembers, "I'd got serious about the whole fact that I'm singing to youth. I guess people could relate to me more because I was their age. Growing up, I had the Lord with me all the time and I had the most brilliant life. The Lord just showed me from a really young age what I was supposed to do and what my purpose was. This was really just such an awesome experience for me because most of my friends would say, 'I have no idea what the Lord wants for my life,' which is really sad. They still have to seek their purpose in life and the Lord gave me that from a really young age. So I'm just blessed by that."

She continues, "When I go out on stage, the main thing I tell people is, 'Listen, this is what the Lord has done for my life and he can do exactly the same for you. I'm no special person or anything like that. If you're just saying, "Lord here I am, I'm available," then the Lord can use you exactly the same way.'"

Melanie's music is already finding a wide appeal and she has travelled abroad on missions trips as well as touring America for a month. Whilst in Cambodia, a group of Christians appealed to her for help constructing a church building. She remembers responding to the pressure of the request, "I was 18 at that stage and I was thinking 'Lord, please don't give me this because I'm 18 and I cannot build a church!' Just after that the Lord gave me a Scripture, Isaiah 49. It just says that he would send me out to the ends of the earth and I was to be open to what God wants me to do. In July I went to the USA for a whole month touring. I raised enough money to build the church and as we speak, the building programme has begun!"

The mixture of music and mission is important for Melanie. The well crafted pop music found on the 'Deep' album is thoroughly contemporary. She says, "I listen to a lot of radio and listen to the new styles. Most of the time I'll write songs or get songs written in that style. So I know that when the music comes out people will say, 'Gee, I like that music! Even though it's Christian music.' So my style is really something that I can minister with and I can have fun with and people can interact with me in the things that I do. That's pretty much what my live ministry is all about; interacting with my crowd."

I wondered whether there was a danger that using her style of pop music which comes and goes with fashion, people might consider her message to be disposable too. "I think because I do a lot of interaction with my audience, they can just really enjoy the music. Even if it does go out of fashion, there's always a new style, a new way that I can get them to listen to the message. It's really always just a great way of getting the message out there so that they can relate to it."

hi cam you send me a copy of some songs off your i believe album?

Where can we get your album? I remember this song.. "I wish we had more time, o wish we had forever but life carries on.. and now I need you more than ever..." k lost my copy and id like to get a new one.. I've been waiting for a long tome to find you!

The first time I heard your song's "I Believe" (last 2006), I thought you're Britney Spears but my co-dj in local Fm radio here in Quezon (Lucban town) province said you're not. Honestly I love your songs, that's why I keep until now the copy of your album you left (when you dropped by) on that fm station. I wish you can visit again our country to minister and to see you in person... God bless you Melanie!!!

My daughter 15 would really like to start out and loves to perform with a mike in hand. What tips would you have for her? Sharon

I love the song: @ the (red) "C" on the album "Deep", and I've made a YouTube video with photo's from our trip to Israel: http://www.youtube.com/watch?v=q0R3bYgZOkQ

Mel-ah-nie, I bought your CD "Deep" on the logos and the lyrics are so inspiring that many of the children of whom I interact are blessed especially track #04. Keep it up! The variation of
tunes in the songs are of taste. It allows persons of various cultures to be reached. God Bless.

Melanie is soooooooooo AWESOME!!! I can't wait to c her again!!!

I know Melanie, I went on a tour with her for 1 month, it was called "The Godly Thunder", we had so much fun, She is an inspiration! Very down to earth, with so much love! Keep it Melanie, Loads of Love Tasha!

Cool, I didnt know so much about Mel-ah-nie. I have 2 of her albums, Deep and I believe. I really like her music. I find the message above highly encouraging to me cause Im a misionionary kid onboard the Logos2. Tell Melanie to come to the ships! PLEASE!

For more on Melanie visit the Melanie artist profile