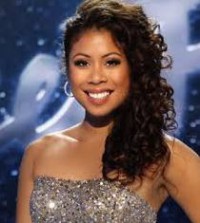 For a singer who's been singing since age three, has appeared countless times on television and who in 2010 was the opening act for megastar Bruno Mars, it's quite astonishing that it's only now that the hugely talented singer Meleana has released her first album. And anyone who's heard Meleana's 'White Walls' album will confirm that the Hawaii-based singer's biography was not exaggerating when it claimed "Meleana performs gospel, Hawaiian, classical opera, ballads, pop and R&B." Her origins are as diverse as her musical styles. Meleana Brown was born and raised in Hawaii but as well as Polynesian is part Filipino, African-American and Portuguese. Hers is a very talented family. She had started singing with other members of her family at New Hope Church on the island of Oahu before her parents, sisters and brothers moved to Japan. (Years later the singer performed at Tokyo's Zepp Theatre in Odaiba, where she was booked as a "Hawaiian gospel" act. She brought the house down.)

Meleana's breakthrough in television came early. She was the tiny teen with the big voice on TV show Hawaii Stars. Then in 2003 the singer was one of the 12 finalists on the TV talent search American Idol in the season which produced the winner Fantasia. Then after 10 years of singing on the Navatek, a luxury liner that cruises between Waikiki and Los Angeles, Meleana moved to LA to pursue a music career. Having been raised in a Christian home the singer admitted that living as a Christian wasn't always easy in the glittering showbiz world. She said, "When you're in the world there are different distractions. A lot of times there are opportunities to compromise your faith and a lot of opportunities have come my way.

"I was living in Los Angeles for a while and there were people saying 'you can do this show, you're gonna be big.' OK cool, what is the show you're on about? Then I learn more and I'm saying, 'Wow! That is completely NOT what I want to do!' So you cling on his promises and you say, 'Lord, I don't want to do anything that will not make you happy.' You look in the mirror and you say 'who am I living for?' We're in the world but not of the world. It's important to keep his word near you so that when there are those times you can revert back to that and lean on that. When you're in the world it can seem so delicious and all this beautiful gold in front of your face. But I kept trying to do things God's way."

And finally Meleana's faith and determination not to succumb to the unsavoury parts of the showbiz world has paid off. The singer has signed to Universal Music's Christian label Dream Records and 'White Walls' is the result. One of the outstanding songs on the album is "Surrender". Said Meleana, "A couple of my friends and I got together and created this song called 'Surrender'. It really speaks about living an everyday life, being in the world but not of the world and not surrendering your wants, your desires and saying 'Lord, I believe you called me for a purpose and I know you have a plan for my life and although these things seem so glittery, so intriguing, I know that your plan is far greater.' Do not compromise. I had to ask myself if I was in the pop market, would that be glorifying him or not? It is so important that you stay close to that way because there is lots of white noise that can distract you." 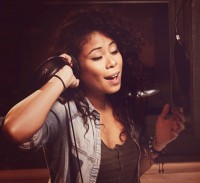 One of Meleana's favourite tracks on 'White Walls' is "Dear Mirror". She said, "While I was in Los Angeles I went through lots of different experiences. A lot of the time it's about your physical image: you're not skinny enough or not rich enough, not pretty enough and that kind of thing. I heard my friends speaking about that and little girls speaking about how concerned they were with the way they looked. I want to look in the mirror and be that image that God has created me to be. He created me in his perfect image. I've got enough make up to paint the Red Sea and it's like we get so many things to cover up our looks. The song encourages people to be who God has called you to be."

Another song on her debut which means a lot to Meleana is the closer "Hold On". She said, "I put that on the album because I've toured the world a bit and I met a man who was dealing with depression. He spoke to me and said 'I want you to know there are lots more people out there going through things in their life, they may feel discouraged, their dreams are shattered, they've been working so hard to win, so to speak, and they get exhausted. The line that really sticks with me on 'Hold On' is 'When silence is screaming and the world is crashing at your feet/Hope is still there, just pray, pray, pray.' Just hold on. Continue to believe, have faith. I want you to write one line that is going to get in people's heads.' Their minds. . . that people have been touched by the song. That is what the album was created for, to meet people where they are at in their lives. I really created the album so that everyone can find a song on there that can inspire them and encourage them to be all that God has created them to be."