Mike Stanley: The Midlands singer/songwriter who's been lead by a light

Irish folk, pop rock or praise and worship - it is all part of the musical armoury of singer/songwriter MIKE STANLEY. Tony Cummings talked to the Midlands musician. 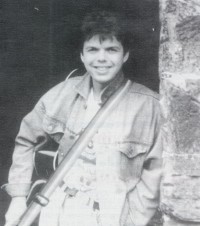 Imagine the scenario. A guitar-toting worship leader leads the excited ensemble of young people in a time of praise and worship. The songs he sings are praise evergreens, "I'm Accepted, I'm Forgiven", "Hosanna", "When I Look Into Your Holiness".

Afterwards the young people swarm around the worship leader. "What are these great new songs? Where can we get them?" Did this unlikely event occur many years ago? Or did it happen in some dim and distant land where news of Hosanna! Music and Graham Kendrick has not yet seeped?

Neither. It was in 1990 that Mike Stanley recognised that his denomination, the Roman Catholic Church, was largely ignorant of the tidal wave of contemporary praise and worship that had swept through Protestant Christendom. Mike decided to do something about it.

"At first I thought of directing the people to Christian bookshops. But then the idea came, why not make a tape myself?" Mike proceeded to select songs.

With keyboard player Adrian Trigg, Mike worked out a set of fresh arrangements for the worship cover versions. To these he added a number of his own originals, including two beautiful pieces he'd written for a Christmas radio programme on Coventry's CWR, "I Am The Voice" (a work based on John The Baptist) and "Let Us Know Your Love". The recording went ahead, though the budget to record the album 'Lead Kindly Light' was hardly in the Big Boys league. "The recording budget for it was Â£115," admits Mike ruefully. "A friend of mine has a little studio in Wolverhampton. It was rough in a few places but it got a lot of distribution into places Graham Kendrick and Hosanna! Music aren't getting to at the moment". Mike Stanley was born in Burntwood, Walsall in 1965. His father, a Roman Catholic Christian, had at one time trained for the priesthood while his mother had embraced Catholicism after years with the Methodist Church. Mike was always musical.

"The parish priest gave me a Spanish guitar when I was six years old and there was no stopping me after that. By the time I was at secondary school I was writing my first yucky little songs, 'I carried your books home from school' kind of things. I was singing in public by the time I was 13 or 14 - at church socials and things. I was always being asked to get up and sing, usually 'Streets Of London'!

"It was while at Leicester Poly studying for a degree in marketing that Mike Stanley's spiritual horizons began to broaden. "I was going to the Christian Union and it really began to dawn on me what being a Christian really was. I began to study the Bible; I began visiting other churches, Anglican and Baptist ones. I even saw my first Christian music concert Phil And John. Until then I had no idea there was such a thing as the Christian music scene. Mike's music scene was somewhat different.

"Like most other students I was strapped for cash and was singing for a few pounds, any chance I got - pubs mainly. Doing cover versions - Beatles, rock 'n' roll - never did any Sex Pistols though. "Mike's music took on a folk roots direction when he was asked to join Drowsy Maggie. "I joined them after they came to play at a folk night organised by my church. Their leader Mike Hipkiss, who sings and plays bodhran, was a Catholic and we became friends. Drowsy Maggie has been going 21 years, playing what I'd call traditional Celtic-based Irish folk. They played PTA's, schools, pubs. When I came into the band I began to introduce a few Christian songs like 'Lord Of The Dance' and 'Bread And Fishes'. I always make a point while I'm working with Drowsy Maggie of leaving no doubt that I'm a Christian." Mike's Christian life had really taken on a new dimension after he attended the Birmingham Charismatic Conference where, after a while, he had been asked to join the worship musicians. Beginning to discover the dynamic of Holy Spirit worship helped give a whole new direction to my life." said Mike. Later, I joined a prayer group, the Divine Love Community in Erdington, Birmingham and I began writing new worship songs for them." Mike has an interesting perspective on the denominational divide. "Someone asked me recently what the Catholic Church knew about the wealth of music in the Protestant churches. The answer is about as much as the Protestant Churches know about Catholic music. How many Protestant Christians have ever heard of songwriters like Ernie Farrell or Bernadette Farrell?

There's a great deal of bridge building to do for Christians on both sides and I think music has a key role to play in that process/Today, Mike Stanley is a veritable jack of all trades. He still plays Irish folk with Drowsy Maggie. He leads worship at many conferences. He plays ecumenical pop - gospel shows (recently gigging on the same bill as East West in Birmingham). He is currently studying for a theology degree. He has begun writing for several other Christian artists.

And in April Mike is to tour Israel with Christian musical maestro Roger Jones. Yet with all these diffuse activities, it's still a simple faith which drives this young, supremely gifted musician onwards.

"I read a book by Gerald Hughes called 'God Of Surprises'. In it he asked the reader, if they were to die, what their epitaph might be. Now, once it would have been something like 'he entertained a lot of people and put a song in their heart'. But now that's not enough. I'd like my epitaph to read 'he communicated the love of God and touched people's hearts'.

Really interested in your article. What could be a better way than music to bring different churches together. I am looking forward to seeing Mike at St John Vianney Church in December.